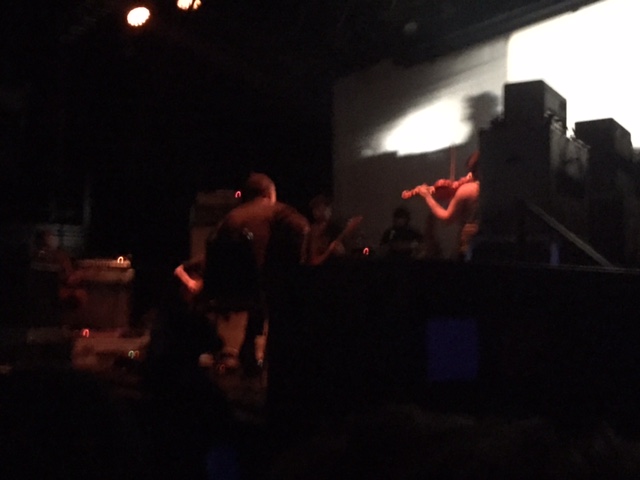 I have different music for different things in my life. When I’m working at my day job I favor indie rock. When I’m working at home on booking shows I listen to a wide variety of metal music. I love old school pop punk when I’m driving far distances. I typically fall asleep to weird, ambient instrumental rock. That being said, when I listen to an old school pop punk song, I usually want to get in my car and go on a roadtrip. When I hear metal music, I feel like I should be at home working on one of my tours. When I listen to indie rock, well, I only listen to that when I’m at my day job. So what happens when I listen to weird ambient instrumental rock? I obviously want to fall asleep.

I have seen this weird ambient hipster music live a couple of times including the This Will Destroy You show. It’s never bad, but it’s always boring to me. I think the main reason is because it completely puts me in the “sleep zone” just due to always listening to it to wind down after a busy day of work and shows. Isn’t it crazy how music can completely alter how you’re feeling. Try and deny that if you want, but you know, deep down, it’s true.

Last night I went to go see one of my favorite bands to fall asleep to, Godspeed You! Black Emperor. From the second the amps were turned on (the members of the band gingerly walked onto stage after a couple minutes of just quiet, ambient white noise) I was, mentally, in bed and ready to pass out. I have been to shows like this before and have found myself lost in one big continuous yawn and yearning to go home early but last night was somehow different.

I knew what was waiting for me inside of First Avenue. I wouldn’t be able to tell you how many songs they played. Hell, I would have no idea when one song ended and the other one started. There would be no vocals so there would be nothing to sing along with and at times there wasn’t even going to be a beat to nod my head to or tap my toe to. Honestly, if my brother and my friend Angel, that I went to this show with, hadn’t have begged me to go with last night, I wouldn’t have gone. I’m glad they invited me and I’m glad I sucked it up and went because what happened on that stage last night…the stage that I go to multiple times a week for bands that I truly get excited about…that was magic. Pure magic.

Now don’t get me wrong, I’m not going to throw away all of my metal albums and start just listening to weird ambient music. I am not going to trade in my black hoodies for cardigans and flannel. I’m still not a fan of instrumental music like God Speed! You Black Emperor unless I’m trying to fall asleep. Now that I’ve gotten that out of my system– the music last night was on a level I’ve never seen live before and I now understand why seeing this band live can truly be a life-changing event.

The Canadian, nine-piece, post-rock collective took over the stage with all of their amps, cords and pedal boards. They formed a circle on the stage and started playing their songs without even acknowledging the crowd. There were no vocal microphones set up for them to introduce themselves but judging by the overly excited crowd, they didn’t need an introduction. The music lulled me into a different world full of pillows and memory foam but I wasn’t sleepy like I have been at other shows like this. It sounded like many of the other bands in this genre that I have seen before and have pretty slept through so it wasn’t the music that was keeping me awake. I could barely see the stage because of how packed it was so it wasn’t that watching the band was super exciting.

To be honest, I can’t tell you why it was so magical. The musicianship was amazing. The fact that these guys seemed cohesive as a group but weren’t doing anything that fit together rhythmically at times was mind blowing to me. The different ways the crowd reacted to the music was intriguing. Some people were head banging to some beat that I didn’t hear. There were other people who were apparently tripping and thought they were a magical fairy of some sort with the way their were waving their arms around. There were people who were just nodding their head to the imaginary beat they thought they were hearing. I just stood there chewing my gum and constantly checking the time but I didn’t yawn as much as I thought I would. I was truly amazing by the sounds coming off of the stage even though they weren’t exciting.

There wasn’t much to watch from where I was. I couldn’t see much of the musicians and the background was mostly blocked due to the wall of amps that lined the whole stage. What did catch my eye was the old school film projectors that were being used to show images behind the band. The four projectors were sitting up in the sound booth and you could see the guy in charge changing films and using his hands to manipulate the images being shown. I couldn’t see much of what the end result was but it was awesome to watch this guy changing the film and using glass bowls and his own hands to distort the images. I’m sure seeing it on the screen was way cooler.

There was one opener last night, Xylouris White. These guys are a two piece featuring an Australian drummer, who look a lot like Einstein, and a Greek singer/ lute player. This was probably one of the most interesting bands I’ve ever heard or seen. I didn’t like the music but watching the drummer use his drumsticks more like paintbrushes than sticks was completely mesmerizing. The lute was playing these intricate, ethnic sounding lines while the drummer was in his own little world playing a little bit of everything. Add the singer’s Greek (maybe? It wasn’t English) vocals that were done in an almost drone sounding voice, and you have one hell of a weird set.

Last night wasn’t exciting. The music wasn’t for me but I’ll go to any show with anyone. It’s all about experiencing new things and last night was definitely an eye opening experience.