I’m Pulling Myself Together 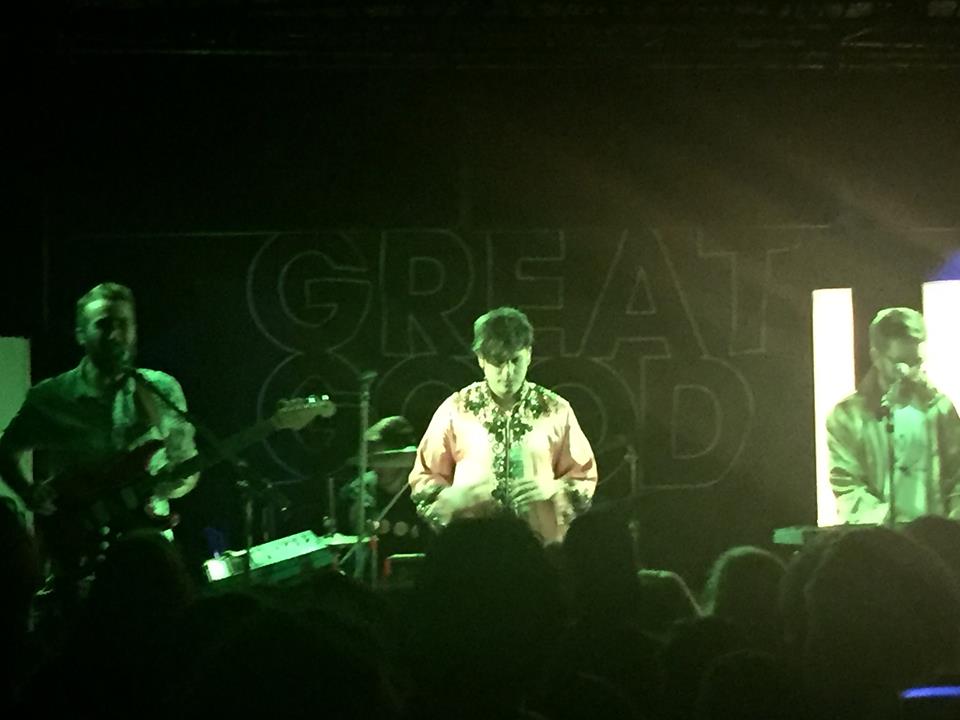 The feeling of being at a concert after a couple nights off was Great. The music was Good. The crowd was Fine. All-in-all it was an OK night.

The show started with Handsome Ghost. This group only has one EP out at this point but you better believe there are huge things to expect for them. They seemed to play almost all of their songs off their EP Steps along with a couple brand spanking new songs. Regardless of the song, the singer’s voice had something about it that you couldn’t pull yourself away from.

Maybe it was the prominent auto-tune or maybe it was they way he looked while he sang the words that talked about the cliche topics of love and love lost, but there was something about him. His voice was smooth with or without the auto-tune. It had this element of realness that many indie pop singers just don’t have. It didn’t feel like he was just going through the motions and saying the words that someone else wrote for him. You could feel him feeling what he was singing and that, my friends, is something that is magical to see when you’re at a show and have no expectations.

As I mentioned, the auto-tune was alive and thriving last night. That usually bugs me and is a huge turn off but it worked last night. It always just depends on the type of music being performed as to whether or not the auto tune works. Last week at the metal show that I walked out of, it did not work… at all.  Last night, at this indie pop show full of upbeat pop songs, it definitely worked.

There’s a time and place for everything and last night was a perfect example of that. I walked out of the show last Thursday because the band turned the night into a rave “wub wub” party full of flashing lights and auto-tune. Last night, the headliner Great Good Fine OK was pretty much doing the same thing but I didn’t walk out. I expected last night to be a bit out of my comfort zone. Last Thursday was not supposed to be.

The headliner of the night was Great Good Fine Ok. I had honestly never heard of these guys before and seemed to be just about the only one in the Twin Cities who hadn’t. The room was packed to the brim full of young kids who weren’t even old enough to drink mixed with the young twenty somethings that probably should have stopped drinking a couple Summit bombers ago. Regardless of who it was in the crowd, they were dancing to Great Good Fine OK like they hadn’t been out of the house in years.

The crowd was excited from the get go and as soon as the band threw out multiple handfuls of glow sticks, the crowd just couldn’t stand still. The music of GGFO really does make you just want to bounce up and down. It’s upbeat pop music but at times sounds techno-y and then indie-y at other times. I understood very quickly why this band was so popular.

The songs they play sound like they are written for other pop singers. These guys could probably make bank by writing songs for other people but come on, there’s no fun in that so I get it. You could almost pick who in the top pop charts could be picked to sing a certain song by these guys. Some songs screamed, the love of my life, Justin Bieber, while others had more of a soulful voice which I could easily hear Bruno Mars playing. But you know what, it was more than cool to see this band playing their own songs.

Their live show was everything you would expect from a band that plays music like this. The light show was on point even though it seemed a bit too big for the small venue. I’m sure at a huge show at First Avenue Mainroom it would be absolutely jaw dropping but at the basement like venue of the 7th Street Entry, it seemed a bit overkill but still gave the show a little something. The drummer and one of the keyboardists/ aux players had some awesome light up drumsticks that would only light up when used. Put all of the flashing lights with the singer’s flashy bedazzled outfit and you get one hell of a visual show.

Last night wasn’t the greatest show of all time but it was also far from the worst. Sometimes it’s nice to go to a show where I can stand in the corner by myself with my cherry coke and just take it all in.

Drink of Choice Throughout the Crowd- Summit EPA