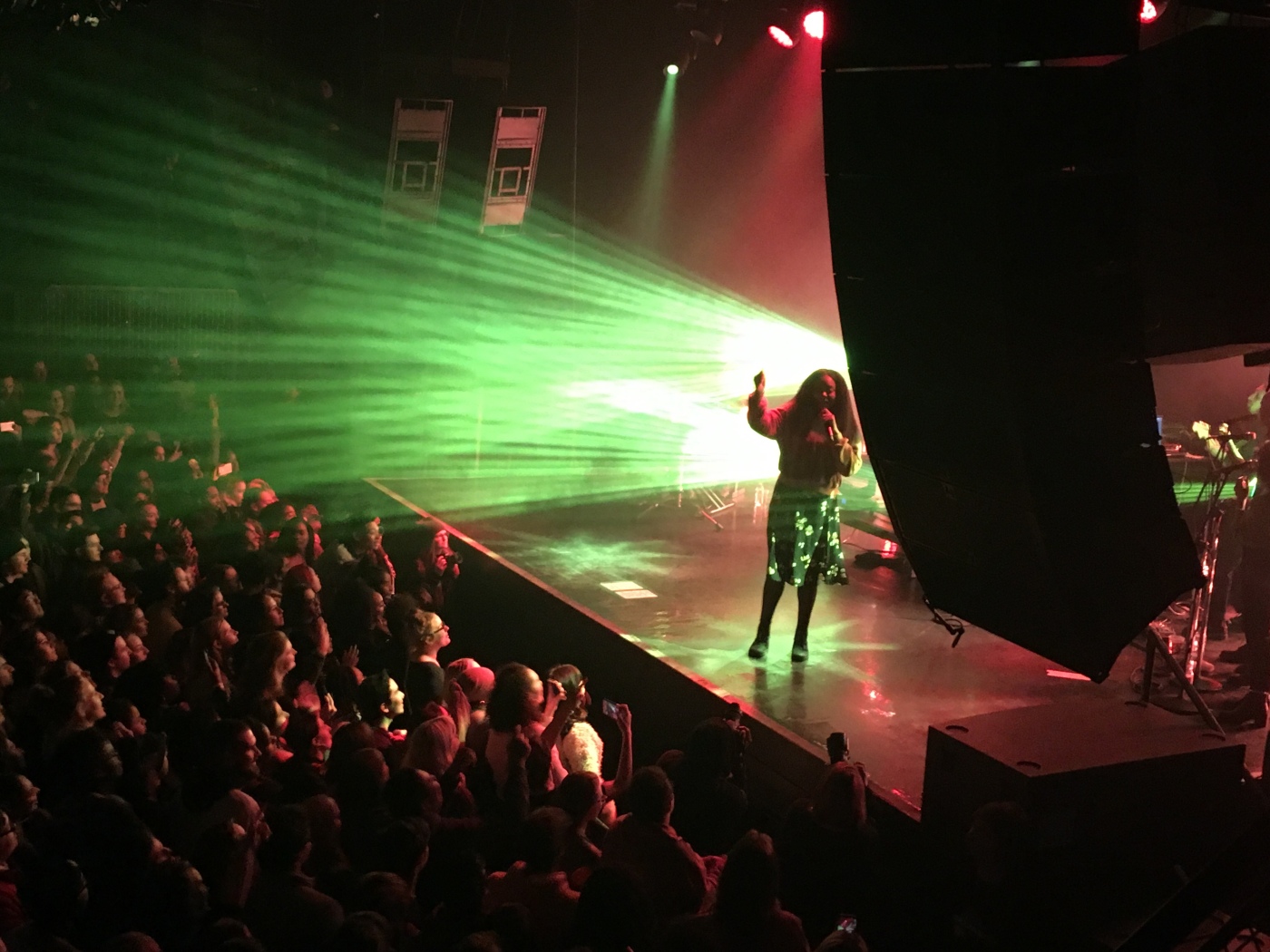 As soon as you walked into First Avenue on Friday night you felt it. You felt this undeniable sense of electric energy. Maybe it’s because it was a Friday, maybe it was because people have been stuck inside for days due to the extreme cold and there’s no end in sight, but I think the real reason is because of the chance to catch the one and only Noname. I wish I could be like my brother and talk about how I’ve been listening to Noname for years and am so stoked to see her have so much buzz but, the truth is I’ve slept on Noname for far too long. Sure, my brother has mentioned her and my friends and I caught some of her set at Eaux Claires but nothing really stuck with me. Fast forward to last year when she released “Room 25” which instantly catapulted into my top five releases of the year. I was finally aware of her immense talent and last night was my first chance to catch this truly amazing woman.

My friend and I grabbed our seats (yeah, seats. Somehow we ended up with a VIP table– look ma, I made it!!) it wasn’t long before opener Elton took the stage. The Chicagoan instantly had the already rowdy crowd jumping up and down to his infectious beats and his spoken-word like raps. The energy was nothing short of electric and honestly there were moments where I wish I was down in the crowd getting sweaty (although, let’s be real, I’m old and the table with a server to bring us drinks we didn’t need was definitely a perk). Elton’s sound was very laid back in a way. Much like Noname, he almost whispered at times and you found yourself straining to hear what he was saying. At one point he literally sat down like he was lounging in a chair between the monitors at the front of the stage. Even with moments like that, his set was still extremely energetic and something I was 100% captivated by. His infectious smile mixed with the up-beat sound and laid back energy all wrapped up in the excitement that was flying through the air– yeah, Elton was a great freaking opener. I truly can’t wait to see him come back to town.

Things moved fast and it seemed like as soon as Elton took the stage, the screen was coming down from the ceiling to conceal the stage changeover. Time flew by and within no time the screen was disappearing back into the ceiling and the sold out audience erupted into cheers. The moment Noname took the stage is one of those moments that my words could never do justice for. There was a sense of excitement that overcame me but also a sense of being comfortable. Noname took the stage in normal clothes with an understated show… Just the way I wanted it. Although she is clearly a superstar that is making waves in the scene, she still came off as completely normal and calm.
Noname wasted no time and instantly jumped into what would turn into a nearly twenty song set that flew by. She energy, like that if Elton, was electric. Her music made you want to move and groove but also made you want to just sway and stay chill. Although rowdy, the audience seemed to be absolutely stunned into a sense of calmness that just couldn’t be explained. It was all eyes on stage and all jaws on the ground. I truly can’t put it into words but I was just completely lost in Noname’s world and it was exactly where I wanted to be. There was something so genuine about her as she performed her unique blend of spoken word, rap, jazz, and everything else in between. Again, just can’t put last nights show into words and if you weren’t there this all probably just sounds like the ramblings of  a crazy person.

As mentioned, everything seemed to move extremely fast last night. Maybe it was because my friend and I were living the high life at the VIP table, but when we realized it was only 11 when we were dumped onto the freezing street to wait for our Uber, it was clear that it really was a short set. Noname’s set was only fifty minutes long. Honestly, I was a bit disappointed. She has so much more material and there were so many more songs that I wanted to hear from her and her talented band. That being said, the briefness of the set kind of went with the only understated-ness of the night. Short, sweet and to the point, Noname killed every track that she performed and I was honestly just being selfish for wanting more. Just because I could have watched her for a solid four more hours doesn’t mean that she wanted to perform for another four hours. Although disappointed, I was beyond happy that I finally got to see the one and only Noname live and be able to enjoy it.

Last night would have been a great day to just stay in. It was freezing outside and there’s a winter storm looming our future up here. That being said, I’m beyond grateful that I got out of the house and went to the show because it will definitely end up on my top ten list of the year.