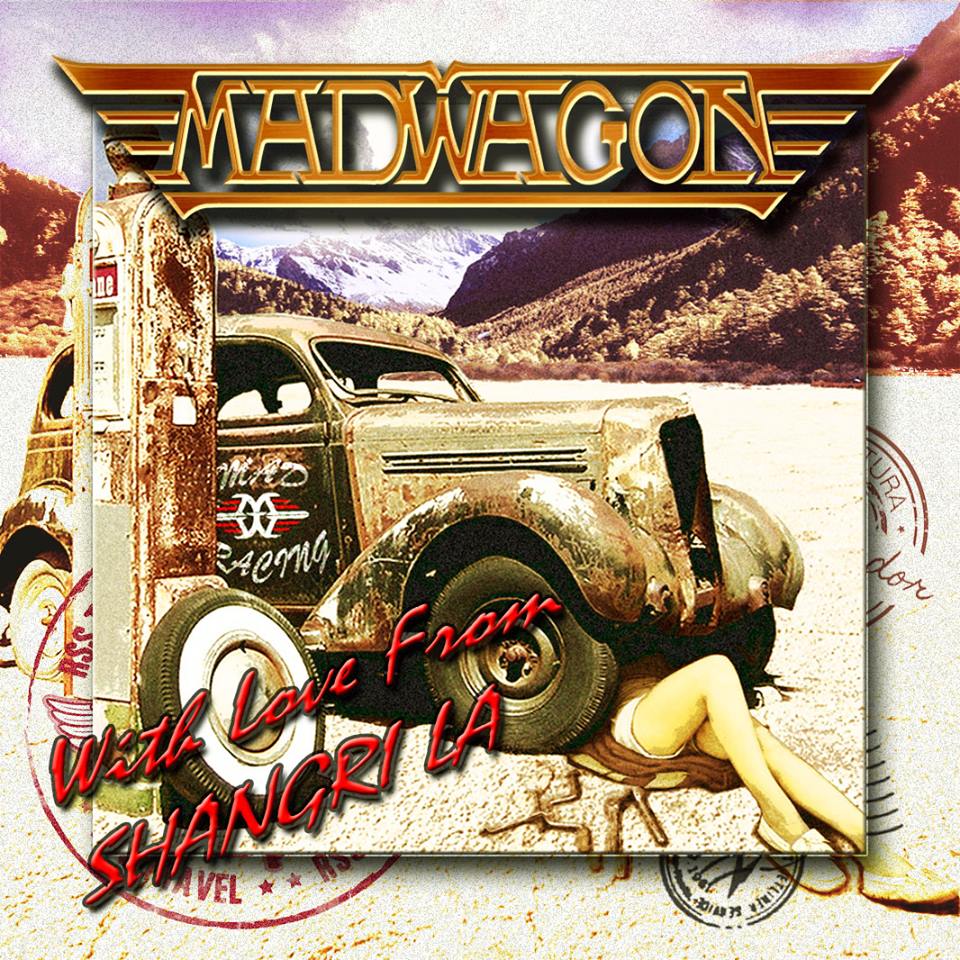 A couple of months ago I connected with Rich Morris who introduced me to the band Jack FoolerY. I checked out their album and fell in love. It was different but felt so familiar at the same time. I was excited to see what the future would hold for that band so I was a bit surprised when I got an e-mail from Rich explaining that he is now in a new project- Madwagon. Although bummed that Rich is no longer in Jack FoolerY, I was super excited to see what he has been up to.

‘With Love From Shangri La’ kicks off with “Shangri La”. Lead singer Angelo Bria’s voice instantly transported me to a time with Ozzy Osborne was king and music was all about the power chords. Although a bit subdued as far as tempo goes, this opening track sets the tone of this nine track album in the most perfect way. Although hailing from the land of hipsters and indie-rock (clearly I’m describing Portland, Oregon), Madwagon is definitely sticking to this 80’s hard rock sound that influenced so many bands that we all listen to today. It’s almost refreshing to hear an old sound like this while knowing that it was just created over the past couple of years.

“Relief From The Low” kicks off with a guitar lick where you can just see the power stance from guitarist Rodney Hardison in your mind. The slower tempo may be off putting for some people who were into the uber-heavy and fast music of the 80’s metal scene but it gives you a chance to hear the pure musicianship of this band. Although subtle, you can hear that this trio is clearly a group of men who know exactly what they are doing. The influences are clear but so is the creativity behind the group. The driving guitars are interrupted towards the end of this song to give way to an impressive guitar solo. Instead of trying to fit as many notes in the solo as possible and playing it as fast as possible as many new bands do, this band takes their time during the solo as if to make sure every single note tells a story.

The third track “Tramp Stamp” features Mark Slaughter (yes, from the legendary group Slaughter) on guitar. I mean, that right there says a lot about this group and their dedication to the craft. I mean, they have freaking Mark Slaughter on here! “Tramp Stamp” has a bit more of a party feel. That could be due to the lyrics being about the god-forsaken trend that was tramp stamps but there’s also a new sense of playfulness in the music that had yet to be seen in the previous two tracks. Where as the first two songs had me in a world of Black Sabbath, this song catapults you into a world where Poison is king. Truly just a fun track and within the first listen I knew it was a favorite of mine.

“Magazine” seems to balance the party-vibe of “Tramp Stamp” and the calmness (I don’t even know if calm is the right word but that’s what I’m going with) of the first two songs. Something about the drums in this song and the following song “Cellphone” gave me the image of an arena show back in the day. There’s just something about the fullness of the sound and the echoing of every drum hit and the precision of every cymbal hit that instantly made me picture an arena show back in the 80’s.

The sixth track “Bad Blood” introduces a sense of energy that has yet to be seen in this album. Something is different about the way Angelo attacks every word during this song. Almost a bit more aggressive and in your face, I love the way the vocal styling changes but the instrumentation doesn’t. It makes this song definitely feel like part of the album while standing out. About a minute and a half into the song, the vocals split into a beautiful harmony which, again, had yet to be seen in this album and definitely produces a wow factor.

“Perdition’s Child” instantly catapults you back into that arena that was created in your mind previously. More upbeat than the other songs, this is a track that makes you want to tap your toes and nod your head to the anthemic beat while sipping on a cold beer. I love the way that the intensity of “Perdition’s Child” fades into “The Narrows”. Although the energy stays high, “The Narrows” definitely goes back to the beginning of the album when it comes to a more subdued tempo. It brings in an almost 90’s vibe to it while still staying in the vein of 80’s heavy rock creating a completely unique sound.

Closing out the album is “What You Need”. Kicking off with an acoustic sounding guitar part which quickly turns into more power chords and the attack of a drum kit, the album ends the same way it started- impressive, powerful, and a complete throwback to a different time when Ozzy was king and leather pants were cool.

Now, unlike most of my friends in the metal scene, I didn’t grow up on Ozzy and Poison so I never really fell into the scene that this album channels. I have to be honest, it wasn’t for me but, as you can tell, I clearly see the value in an album like this being released in this day and age and definitely didn’t hate it. Madwagon may not be my cup of tea but I fully support what they are doing and hope they continue to stay true to themselves and this sound.

Chances Of Getting A Noise Complaint While Listening To In An Apartment: 4 out of 10

What My Cats Thought Of It: Artemis slept on the floor of the kitchen; Autumn stayed curled up on my bed

How Badly I Want To See This Performed Live: 3 out of 10