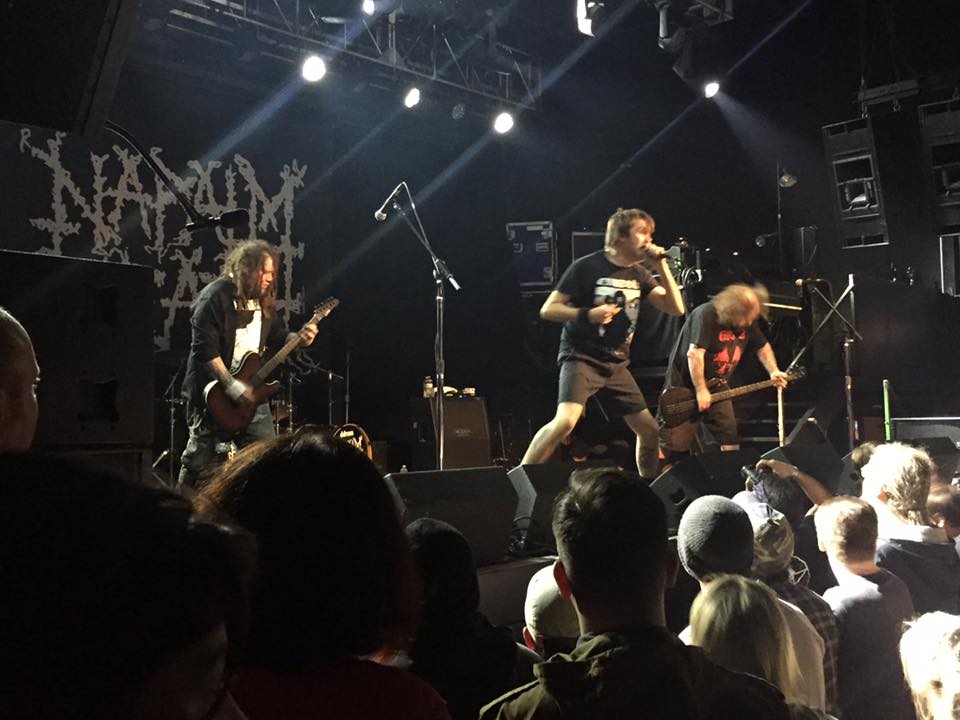 A soiree of weirdness. That’s how singer Mark Greenway of Napalm Death described last night’s show and I don’t think there is any other way to describe it.

The show started off with Melt Banana. Now, I listen to some super strange music but this might have been a bit too strange for me. These guys are a duo from Japan that plays something that is a hybrid of grindcore, electronica, pop, experimental, hell, let’s through a little of the noise genre in there too. If that doesn’t have you head spinning yet, just so see them live because that is the freaking icing on the cake.

Singer Yasuko Onuki had this thing in her hand that I could not for the life of my figure out what it was. Thank God I spotted a friend of mine working the soundboard so the texts started flying. Apparently, she was holding a software controller that triggers the drums and other strange sounds. Okay, I know that doesn’t sound that awesome but you just couldn’t take your eyes off of her. The way she would whip this controller thing around her head and all over the place was absolutely mesmerizing. I almost didn’t even realize there was a guitarist on stage with her to be perfectly honest.

Their music was fast and loud. There was one point where Yasuko said they were going to play six short songs rapid fire. She wasn’t kidding about the short part. These songs seemed more like excerpts from songs being that they were only about fifteen seconds long each. Even when the songs were longer than fifteen seconds, they were fast and powerful. Honestly, it sounded more like noise than anything else to me. It’s rare that I just don’t understand a band’s music but Melt Banana definitely had me confused and wishing I could understand it as much as the people in the mosh pit that had formed.

Second to play Sunday night was The Melvins. These guys have a huge following in Minneapolis. I truly thought they were from here but apparently that’s not true at all, people up here just really really like them and you could tell by watching the crowd.

Much like Melt Banana. These guys are hard to classify musically. They are a little punk, a little metal, a lot of sludgy stoner rock, some experimental… I don’t even know. Regardless of how you want to classify them, they had the crowd completely captivated. As soon as the music started, the crowd was headbanging in perfect time. It was quite a sight to see to be quite honest with you. I mean, don’t get me wrong, I’ve seen headbangers before but this was hundreds of people doing exactly the same thing at the same time. It almost looked like waves or something.

I have to be honest, I wasn’t completely hooked by these guys. Their live show was fine and full of energy but their music seemed just a tad bit too sludgy for me. That being said, I couldn’t help but watch the crowd during the whole set. The crowd was so excited to see this legendary band play and almost instantly, the mosh pit broke. It wasn’t as extreme as some of the pits I have seen but it kept growing and growing with every song and eventually, majority of the floor was a giant stoner pit of people just casually bumping into each other and shoving each other.

The crowd was more than happy with the hour long set from The Melvins which seemed to cover music from throughout their long career. People were screaming and shouting at them in between songs but as soon as the music started, the crowd would go silent as to respect the art and give The Melvins the attention that they more than deserved.

Headlining the show was, my personal favorite of the line-up, Napalm Death. I’ve dreamt about the day I will finally get to see these guys live and last night was everything I wanted it to be.

Napalm Death has been around forever. They started in 1981 and have been around ever since. These guys were probably the most classifiable band of the night. They were metal, with a little bit of punk, a little bit of grind… well crap, now you understand why the phrase “soiree of weirdness” is a perfect way to explain the music of last night.

Their lyrics, if you can actually understand them, make you think. Some are political and some just really make you question other people’s views on the world and even your own views. It was great to see this emotion displayed live and even more amazing to hear Mark explain what some of the songs were actually about. When he explained the meaning behind some of them, you could just hear the passion in his voice and it made you feel passionate about the music they were putting out there.

These guys have put out 16 full length albums thus far (with no end in sight) so obviously they couldn’t play everything. They did a great job of mixing old and new music along with a couple covers including a Dead Kennedys and a Cryptic Slaughter cover (which the crowd went absolutely batshit over).

The crowd was intense throughout their set. Last night was the first time I noticed First Avenue security down near the pit. They weren’t looking for people to kick out, they were simply on the edges of the pit pushing people back in. That right there is why I love the venues up here so much. These security guards weren’t looking for trouble and weren’t stopping these people from getting their aggression out in the pit, they were merely making sure bystanders weren’t getting hurt and making sure if someone fell down, they got up and got right back to it. I love it. Seeing that just made my heart so happy and was probably one of the highlights of my night.

After being lost in a world of Prince music and movies for the past couple of days (I regret nothing!) it was super nice to get back to going to shows. Last night was a great show of talent and weirdness all wrapped into a good old fashioned rock show.