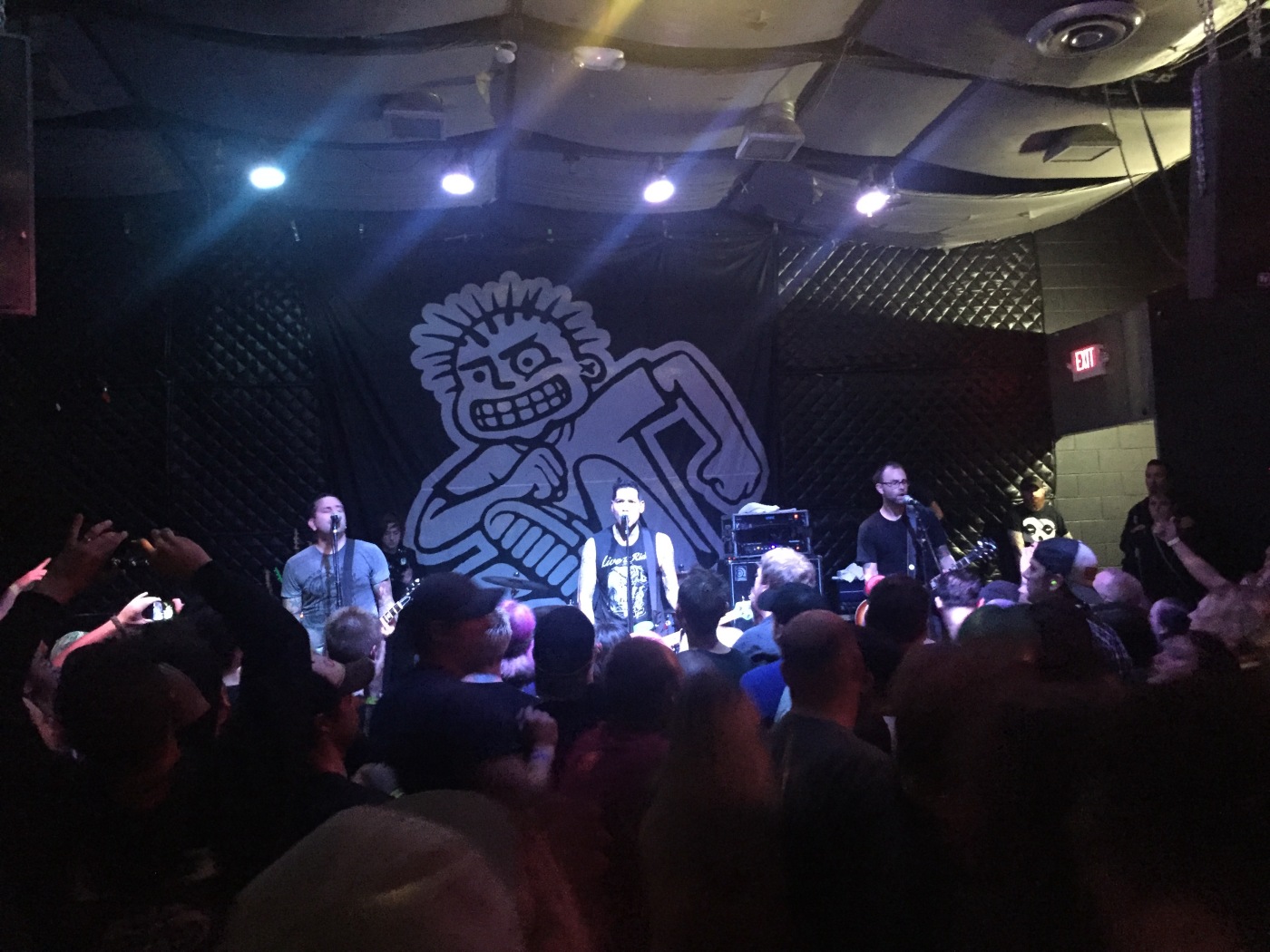 I worked in record shops throughout my teen years and had first dibs on any promotional copies that came to us. They say don’t judge a book by it’s cover but that’s exactly what I did. I remember coming across the album “The Ever Passing Moment”. The album art wasn’t that interesting. It just had three men standing there with some boxes drawn around them but there was something about it. I threw it in my bag, got home, and put the CD into my boombox.

What I heard changed my life.

The music was more upbeat than I was used to but it still had a bit of an edge to it. It made you want to dance around your room with a smile on your face. It was so different than the Slipknot I had been blaring for the past couple of months but it gave me the same warm, fuzzy feeling. I remember sitting on my bed, reading through the liner notes from the CD and thinking to myself, this pop-punk thing is everything I’ve been missing in my life.

I obsessed over MxPx for the next few months after finding that CD. Eventually, I moved on but moved onto other pop-punk bands but my love for MxPx never changed. It’s been over ten years since I got that album and I still know every word to every single song on that album along with their other albums.

My little brother and I lived in separate houses for a couple of years. He lived with our mom, I lived with our dad. We really didn’t have much in common but the one thing that did bring us together was the music and MxPx was one of the first bands we really bonded over. When the Triple Rock announced that MxPx would be coming to town, I grabbed my phone to text Hayden (my little brother) but he had already beat me to the punch.

That’s all it said and that’s all he had to say.

The second tickets went on sale, Hayden had gotten them for us. Going to a show a every night has made it hard for me to get excited about shows but I was anxious for this one. I had never gotten a chance to see MxPx before and now was my chance. I wasn’t going to miss this for anything.

Hayden, my friends Brian & Alyssa, and I got to the venue with smiles on our faces. We knew what we were about to experience was going to be amazing but I don’t think I realized just how amazing it would be.

There was only one opening act and, thankfully, I knew I was going to love them. It was Masked Intruder and every time I’ve seen them, I’ve had an amazing time. These guys take fun to the next level and put on a show that gets you dancing and moving.

The whole concept of this band is that the musicians are running from the cops. They wear colored ski masks and are referred to by the mask’s color. (For example, the singer is known as Intruder Blue and wears a bright blue ski mask with his glasses laid on top.) The band is always joined by police officer Bradford. Officer Bradford stands on stage as if he is their parole officer or something and watches the band like a hawk. He typically has his arms crossed and a stern look on his face for the first couple of songs. Eventually, he loosens up and ends up getting in the crowd to dance.

Masked Intruder is one of the few bands with a gimmick that I truly enjoy. I enjoy their gimmick because it makes their live shows super fun but more importantly, their music is actually really good. There are some bands out there that do a gimmicky thing to try and compensate for their music but for Masked Intruder the gimmick is more of an added bonus. You’re going to dance to their pop-punk music regardless but the fact that Officer Bradford is in the crowd literally making you dance just adds to the fun.

I lost track of time and it seemed like as soon as Masked Intruder got on stage, they were leaving the stage and the techs were setting up for MxPx. I could feel my heart beat a little bit faster. I was excited and anxious to finally see this band that truly changed my life.

The music started and it was like I had forgotten where I was. I lost Hayden into the pit as they played through “My Life Story”. I stood there in shock. It was happening. There I was listening to MxPx play the song that changed my life. I couldn’t believe it. The smile that was on my face seemed to be permanent. My cheeks hurt from how big the smile was and I laughed as I watched my little brother flail through the small pit that had opened up.

The set went on and MxPx somehow played damn near every song I wanted them to play. With eleven full length albums out there, I knew it was going to be impossible for them to play every single song that every single person in the crowd wanted to hear but I think they did an amazing job playing a little bit from every era of the band. From the very beginning when they were more of a skate punk band to the bitter end when the pure pop-punk sound really came through.

Much like Masked Intruder, it seemed like as soon as MxPx got on the stage, they were leaving again. I didn’t want it to end and, even though I knew an encore was imminent, it just wasn’t enough.

The last song MxPx played was “Punk Rawk Show” and that’s when I lost it. As soon as I heard that first note I pushed my way to the front. I didn’t care about anything other than that band on that stage playing a song that has become somewhat of a soundtrack to my life. The lyrics say it all, “We ain’t got no place to go so let’s go to the punk rock show”. The theme song of my life. I screamed those lyrics as loud as I could and pumped my fist in the air to every beat. I looked beside me to find my buddy Brian doing the exact thing. Behind me was my brother screaming the same words and doing the same thing.

Some concerts can mean everything to you and quickly turn into something more than just a concert. Last night was one of those concerts.

Drunkards Taken Out By Security- None Noticed