Die Knowing You Gave Nothing Less 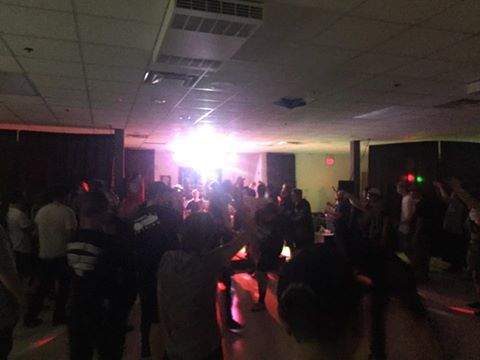 There was no stage last night. No bright and programmed lights. No extensive sound system.

There was nothing fancy about last night and it was perfect.

Let me start off by trying to explain this unassuming venue. The show was held at The Elk’s Lodge which is part of a strip mall in the middle of freaking nowhere. Last night was my second time at the venue and, although it seems super weird location wise, it’s definitely my new favorite venue.

You walk into the Elk’s Lodge to find yourself in exactly what you would picture if I said “Elk’s Lodge” or “VFW”. There’s nothing fancy about the place at all. The regulars are typically sitting at the bar that lacks a fancy draft system. If you keep walking you will find yourself in a huge, empty room… the venue. When I say empty, I mean empty. There’s no stage, a very modest sound board, and some black curtains that help form the “back stage” area. There’s nothing glamorous about it but that’s okay, it’s actually great because then there is nothing to distract you from the music and the people around you.

The best part of The Elk’s Lodge is David, the guy in charge of the venue portion of the place. This is the most genuine guy I’ve met in the scene in an extremely long time. The first time I met him (I went to a local show here a couple months back but didn’t write about it because I had writer’s block) he was talking about how he wanted to make The Elk’s Lodge the next big venue. He was bragging to my buddy Bill (of Metalsota) about all of these huge shows that he was going to put an offer on. I couldn’t help but chuckle. He seemed like a great guy and all but I couldn’t see anyone really big playing at this place. I saw this place more as somewhere to go when I had a night off to catch a couple local acts that I hadn’t had a chance to see. Not a place to see nationally touring acts.

Then the show was announced.

I couldn’t believe it. One of the original bands to get me into hardcore music was going to be playing at The Elk’s Lodge? Seriously?

Oh, it was serious and last night turned into one of the best Comeback Kid shows I have ever seen.

Comeback Kid was the headliner and the only band on the bill that I had heard of before. I knew that Stone had members from some super good hardcore groups including Expire but that’s seriously all I knew about the show.

I got there at doors because if you don’t support local/opening acts then you’re part of the problem with the music scene. I’m glad I got there when I did because I could tell with even the first band that this line-up was full of bands (both local and regional) that I should not be sleeping on. Each band was great and different. There were some metalcore bands, some straight up hardcore bands, and then some bands that did a very good job of blurring the two genres together. Regardless of which band was on the floor in front of the crowd that had trickled in, I was enjoying what I heard and enjoying what I saw.

Most shows like this are 21+ or at least 18+ but last night was all ages. This may not mean much to someone who doesn’t go to shows often but I remember being underage and my heart breaking when I found out I wasn’t old enough to get into the concerts. Having a venue like this in the Twin Cities is truly something special.

The younger crowd meant more energy. It didn’t matter if it was a local band that was playing or if it was Comeback Kid or Stone (who seemed to be the favorite of the night when it came to the crowd), the crowd was going nuts and the pit was open the whole time. I envy the kids that can jump into the pit and do all of that dancing. I wish I had the coordination to do it but I know myself and know that the one time I get in there and try to keep up will be the time I fall on my butt in front of everyone so I spent the show on the outskirts of the pit.

Kids were flying all over the place. At one point, a poor guy got knocked the hell out but he was quickly surrounded by members of the audience. Within seconds I saw David rush in to tend to the poor kid. I tried not to pay attention to what was going on because it was none of my business and Stone was still playing their set (Stone’s singer put it best when he said that people get hurt at hardcore shows all the time, crowding them isn’t going to do anything to help, the show must go on) but I couldn’t help but notice David pick up this poor kid and carry him out front to wait for paramedics. I see people get hurt at shows all the time, what I don’t see are venue managers or booking agents helping the kids out. David treated that poor kid like he was his own and it truly warmed my heart.

No matter where you were in the venue or why you showed up at the concert last night, you had a good time and felt like you were part of a family. Last night was the way a concert should be, it was real and made you feel something.

I don’t know what it means to be “hardcore” and I would never pretend to be whatever that is but I do know I was a part of the hardcore family last night and it was one of the greatest feelings ever.

Average Age of the Crowd- 18