And We’re Just Getting By… 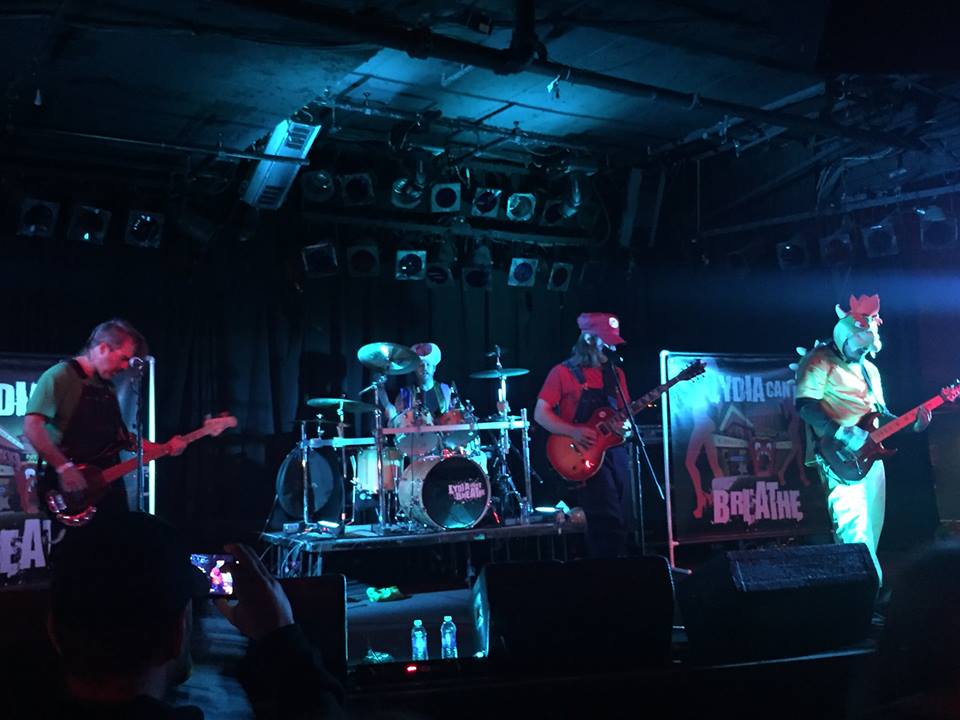 I was assaulted by peanut butter and jelly sandwiches, chocolate coins, and silly string at the show last night. I have to say, that was a first.

I really just wanted to stay home. I am still on a high from meeting Tony Lovato of Mest on Friday night and I honestly just wanted a night at home to make my step-mom’s famous enchiladas and cuddle with my cats while binge watching terrible shows. It was going to be a perfect night in. “Going to be” would be the key words. Instead, I got talked into going to a show. Okay, so maybe it doesn’t take much to talk me into a show but that’s not the point.

I truly felt bad for Lydia Can’t Breathe. They were the headliner and the only touring act of the night. These guys have been packing venues across the country but last night there were maybe thirty people who stuck around long enough to see them play. What the hell is wrong with people up here? I love this scene to death. I truly do. I think the people in the Minnesota music scene are some of the best people on the planet but come on…. get off your asses and get to a show. I don’t care if you don’t know who is on the bill. I get it, I do. I truly did want to stay at home last night but it was a $10 show with five bands playing. That’s $2 a band. How could you say no to that?!

Even though calling the crowd “modest” would be an understatement, Lydia Can’t Breathe still gave the show their all. My buddy DJ is one of the people that convinced me to go to the show last night. He told me that they always do something fun for their live show. For example, he told me that on their last tour, they dressed up as super troopers and had people chug maple syrup on stage. He ruined the surprise last night by telling me that the band was dressing up as Mario characters on this tour but I still had to go and see for myself. It seemed like they were a band that loves to have fun and that will win me over everytime.

Not only were the band members dressed up as characters from Mario, their merch guy was also dressed up and started throwing chocolate gold coins at the crowd. He would jump up on the bar and railings around the venue while chucking these gold coins at the crowd. When he ran out of chocolate coins, he moved onto a beach ball that made it’s way through the crowd, on to the stage, and then back out into the crowd multiple times. When he decided that wasn’t enough, he assaulted the crowd with silly string. As if that wasn’t enough, Lydia Can’t Breathe has a song called “Peanutbutterjelly” so obviously it only makes sense that they had two people come up on stage to make peanut butter jelly sandwiches that they would then throw into the crowd. It was definitely one of those “you had to be there moments” but it was clever, cute and hilarious.

This all sounds gimmicky, I know, but honestly, I wasn’t a huge fan of the music and this kept me entertained and kept me from walking out. It wasn’t that their music wasn’t bad, it was actually quite the opposite. The music sounded clean and completely different from most of the metal music out there right now but it just wasn’t for me. Their lyrics seemed to have humor in them which went along great with the whole performance. Even though I couldn’t see myself becoming a die hard fan of theirs, I will definitely be supporting them in the future. They gave me something to talk about and gave the small crowd everything they had even though they could have easily slacked off and had an easy night due to the underwhelming attendance.

As I previously mentioned, there were a couple of local bands that opened up the show. I had only seen one of the four locals previously so I wasn’t quite sure what to expect. Each of the local groups had to deal with the lack of people but each of them did a great job and grabbed the attention of the small crowd. My only gripe with some of the locals is that they didn’t persuade their fans to stay throughout that night. This is something that kills me. As a band, your main job (next to playing) is to support everyone else playing that night and to convince your fans to do the same. It seemed like the locals last night just didn’t care. It wasn’t that they came off as snooty or anything but if I see you going out the back door while another band is playing, you are going to loose some points in my book.

Last night was a first for me. I was assaulted by peanut butter jelly sandwiches, chocolate gold coins, and silly string. This is why I do this night after night… you never know what you’re going to get.

Level of Moshing- None

Celebrity Sightings- DJ of Buried Above Ground; Bill of Metalsota