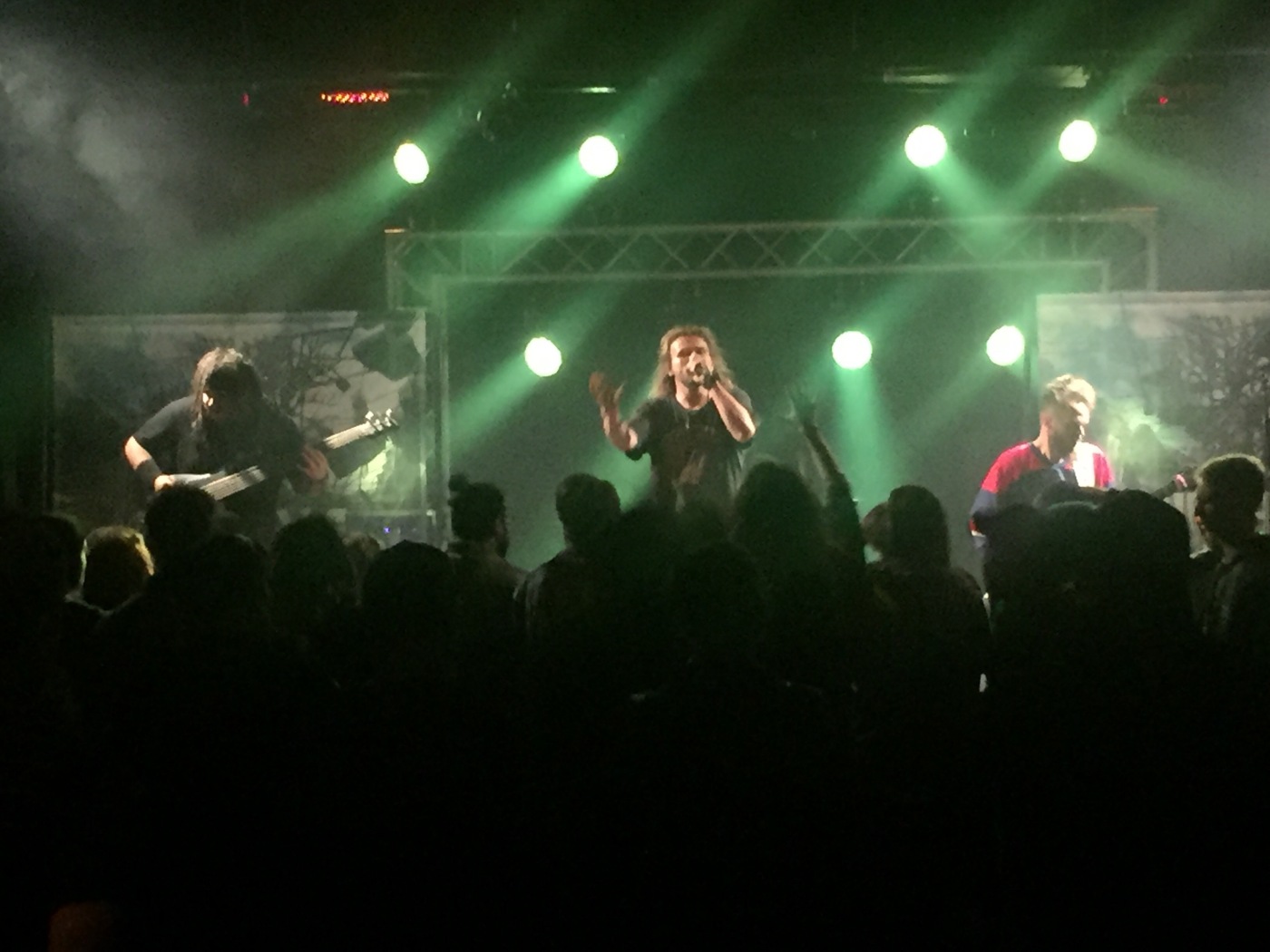 Last night’s show was nothing short of a celebration. We were celebrating the release of friend’s music. Celebrating the enormous amount of talent our friends have. Most importantly, we were celebrating just how amazing the Twin Cities metal scene is. (Yes, I realize that some of the bands that played last night aren’t actually from the Twin Cities. I mean, hell, there was even a band from Texas but their music and the members fit in perfectly with all of the locals last night so I’m claiming them as our if only for the night.)

With eight bands on the line-up, me writing about each band would take for freaking ever. That being said, every single band that graced that stage last night brought a different style, a different energy but a crap ton of talent. There was not a single band last night where I found myself longing to be at one of the other many shows going on last night or just being at home. Every band seemed better than the last and created a true showcase of some of the best metal bands in our scene. That being said, here are some of the highlights of last night:

Fail To Decay– A friend of mine had been trying to shove this band down my throat but, being a live show type of person, I wanted to see these guys live before I actually listened to their recordings (Yes, they have played shows I have been at before but those were huge shows with too many bands on them and I always seemed to miss their sets). With heavy guitar riffs backed by a driving drum beat, these guys kept the energy alive and striving throughout the crowd. The vocals had a sense of brutality without being too extreme as to make it feel over the top. Everything about this band was a balance of perfection which led to a truly perfect set.

Pangaea– What. The. Hell. I had been hearing about these guys for awhile now and was super excited to catch them. I wanted to see what the buzz was all about and, within a couple of notes, I understood the buzz. These guys were clean, precise, and truly interesting to listen to. Their music was a bit unpredictable but in the best possible way. With complicated rhythms that were somehow easy to listen to, I was sold. These guys seriously blew my mind and I will be spending some time scouring their upcoming shows and moving some stuff around just so I can see them again.

Intrinsic– These guys had the most technical sound of the night but, like Pangaea, somehow they made it easy to understand. Sometimes when you hear technical bands, it takes a while to really get into it or to figure out when to nod your head but that was not the case with these guys. With too many instruments on stage to list, there was a lot going on and I will admit that at times it got a little muddled but, even with that, their set was absolutely amazing. It seemed like every band last night had something that made them stand out and, for Intrinsic, it was the saxophone that was featured at a few spots. I mean, come on, metal music with a saxophone? If that doesn’t have you intrigued then I truly don’t know what will. Last night was Intrinsic’s album release show and I think it’s easy to say that this may be the year of Intrinsic.

Mithya– If you’ve been reading my posts for awhile, you know my feelings about these guys– I absolutely love them. Their singer Lee Mintz (who happens to be a friend of mine) truly has one of the best voices in the local scene and it seemed like last night he was definitely on top of his game. I’ve seen Mithya multiple times in the past but last night was different. Everything about their set was perfect. The music was dead on, they never missed a beat and Lee’s voice was beyond perfect. Like Intrinsic, Mithya released an album last night. I had bumped into Lee the other night and seeing the passion as he talked about the stress of getting this album done said it all. I am more than proud of all of my boys in Mithya. What great musicians, great sound, and great show.

Sam Goldberger– Okay, let’s be honest, local rock shows are not known for their light shows. Typically the sound guy will turn on some stage lights and that’s that. Maybe if the sound guy is feeling sassy, they will push some buttons and make some lights flash here and there but that’s it. That was not the case at all last night. Sam is a familiar face in the scene and I’ve met him a couple of times through friends of friends and what not. His passion for giving local bands amazing light shows has granted him a shout out. It’s heart warming to see this guy give his all to local shows. The sweeping and flashing colored lights throughout the night were easily worthy of a nationally touring act. When mixed with the truly talented musicians, if you didn’t know the scene or just stopped into the bar after watching the Minnesota Wild game, you probably thought it was a bill of touring bands.

I celebrated the scene I love last night. According to my hangover today, it would seem as if I celebrated a bit too hard but that’s half the fun. I watched bands that I have fallen in love with over the past couple of years and saw bands that I had never heard of. I can not stress this enough- every single band that played last night was amazing. It was a show that truly showcased some of the best of the best and I loved every single second of the night.

Celebrity Sightings- the By The Thousands boys; Ben of Graveslave; Louis of Roads of Glass; DJ and Digg of Buried Above Ground… Like usual, I know I’m missing people and I blame that on the beer!