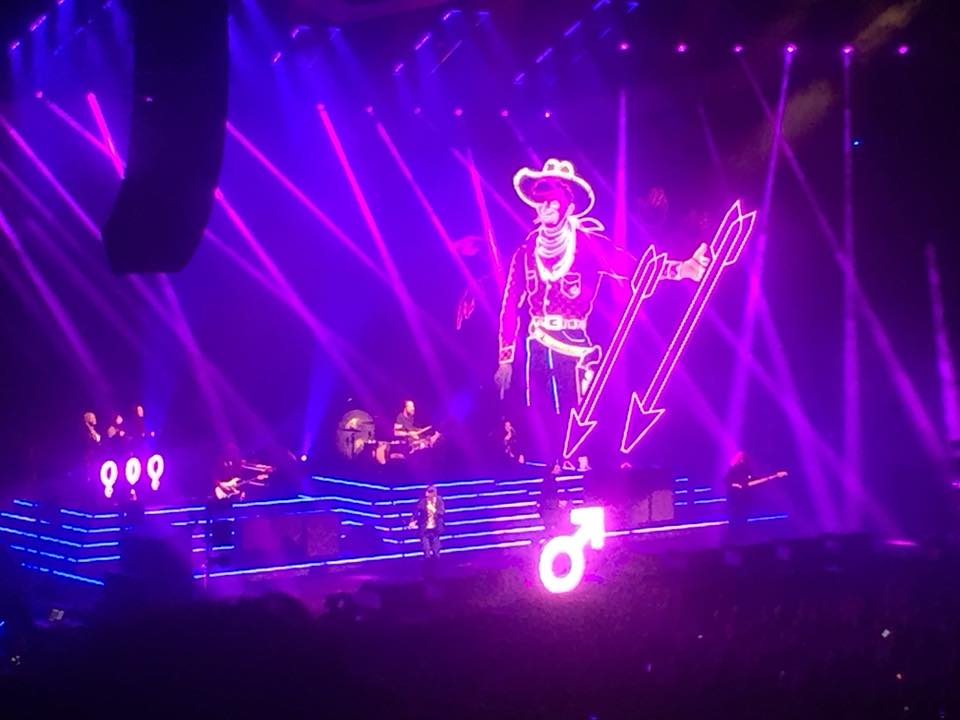 When I got an e-mail early in the afternoon yesterday saying that there were no press seat left for The Killers’ show last night, I was bummed. It has been years since I have seen this group and I was truly looking forward to it but it clearly just wasn’t in the cards. My phone was blowing up as I was driving home from work. When I got home, I realized it was the bossman at the other blog explaining that the wonderful staff at Xcel had found an extra ticket and it was mine if I wanted it. I was shocked and wasted no time pinging him back saying… um, yeah, I think I’ll take that ticket. My excitement levels were through the roof and I still had three hours before the show– It was going to be a long night.

Australian Alex Cameron kicked the night off promptly at 8PM. Joined by his band member/ “business partner” Roy Molloy, and three other members, Alex wasted no time catching the crowd early and making them hear what he had to give. Alex’s voice commanded the quickly growing crowd with ease while not coming off as desperate for attention. The music of Alex Cameron was up beat and catchy while not coming off as top-forty and generic. It was easy to see why they had been chosen to open this tour as the music of Alex Cameron mirrored that of The Killers while still staying unique. The energy was perfect for an opening act of an arena show and truly got people going and in the mood for what was to come.

With only two albums out, it was a bit strange to think that this fairly “no name” act was opening for a giant act such as The Killers. I was very intrigued as to how that happened and about half way through the show Alex addressed it. He explained that one day Brandon Flowers (singer of The Killers) e-mailed him. Alex truly thought it was just a mailing list e-mail since why would Brandon be e-mailing him personally but that’s exactly what happened and thus began Alex Cameron’s journey to fame. Alex went on to explain just how down to earth and nice all of the guys of The Killers were and, although it’s been said about nearly every celebrity out there, there was something that had me feeling like it could be true about The Killers.

Hailing from Las Vegas, Nevada, The Killers have been a force to be reckoned with for years now. Ever since their 2004 release “Hot Fuss”, they have been putting out hit after hit and have easily gained a very loyal following. Singer Brand Flowers admitted to the packed arena that it had been far too long since they have been to The Twin Cities and things have definitely changed with the band. Instead of just a couple of dudes on a stage, there was a full band on a giant stage full of props, lights, and (eventually) fireworks and confetti). Even with the apparent changes in this band, you could tell the crowd was excited and was long due for a visit from this powerhouse of a group.

The Killers’ set was full of energy as they powered through their seventeen song set followed by a five song encore. They seemed to try and play a mix of new and old songs but it was clear from the audience’s reaction that the older ones were what really mattered. The first time the crowd really erupted was three songs in when the group broke into “Somebody Told Me” from that fateful 2004 album that truly made this group shoot to fame. After the audience got a taste of nostalgia, it seemed like they just couldn’t get enough and, as entertaining as the new songs were, the arena seemed to erupt every time The Killers would click into an older track.

The hour and a half long set was full of surprises but nothing seemed to be over done. Sure, there was plenty of confetti and the fireworks during the encore were a bit dramatic but, as far as arena shows go, this had to have been the most humble one I’ve ever seen. Other than the sparkly gold suit that Brandon wore during the encore, there was really nothing flashy about this performance and I absolutely loved that. The Killers are one of those bands that truly did the grind and paid their dues. The members of this group (like Alex Cameron mentioned) are truly down to earth, good people and that was made evident by the less than dramatic show.

Out of all of the shows I’ve seen at arenas, last night’s set was probably the most real I have ever seen when it comes to the music. There were obvious mistakes and, at one point, a feedback issue that I thought could never happen at giant shows like this. Again, this is more proof that although they are a household name at this point, The Killers have never forgotten what it’s about– the music. Early on in the concert, Brandon quoted  Evel Knievel by stating, “People paid to see the attempt, not a perfect landing!”, and something about that sat extremely well with me. Here was this giant superstar admitting that he isn’t perfect and neither is anyone in his band– but they are going to give the crowd their all and that’s exactly what they did.

I know it’s still early in the year– hell, it’s only mid-January– but this year is off to a brilliant start as far as concerts go. Last night was no exception and I left The Xcel Center with a smile on my face and energized– the way a concert should leave you.

Spotted Flying Through The Air- Confetti

People Taken Out By Security- 0