The Bloody Pit of Horror 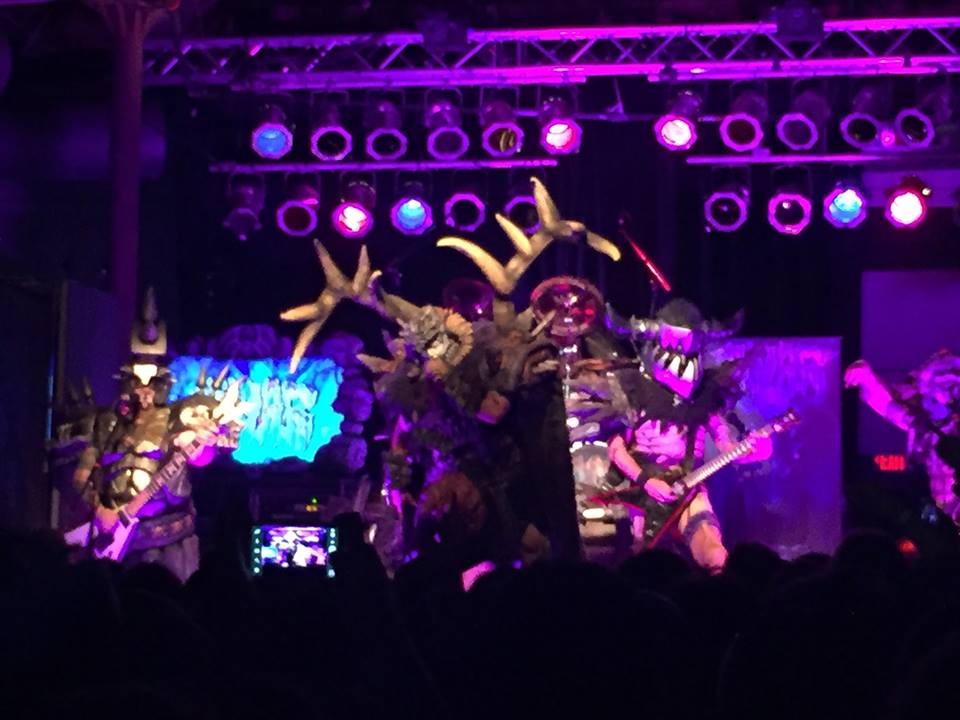 I drove four hours back to Des Moines, Iowa just to get doused in fake blood. Oh yeah, I get to spend some time with my family when I’m down here too. But more importantly… I drove down here for GWAR!

It’s hard to put a Gwar show into words. It’s like no other show I’ve ever seen in my life. It’s amazing enough to make me travel the four hours down to Des Moines and put up with this godforsaken town for a whole weekend just so I could experience Gwar’s live show for the umpteenth time.

Gwar is one of the few bands that I go to see solely because of their show, not the music. I have to be honest with you, I hate their music. I understand that they are legendary and everything but I just don’t get the music. I feel like my parents when I listen to Gwar on CD because after a song or two, they all sound the same and they are just loud.

It’s the live show that I live for. Gwar has never let me down. I wish that I was able to see Gwar perform every Friday just to help me unwind from a stressful work week. What makes it so amazing? It’s the costumes, it’s the fake blood, it’s the theatrics, it’s everything (except the music).

Gwar is the only show where I actually plan out what I’m wearing in advance. I have to make sure that I have my worst jeans on. Make sure I have my “show shoes” with all the holes in them. I have to make sure I have a crisp white t-shirt to wear. It’s the only metal show where majority of the crowd will have a white t-shirt on. The reason? Wear a white t-shirt, get in the “splash zone” and wah-lah, you have a free souvenir concert t-shirt without paying the $25. Call me a Jew if you want, but I’d rather have my personalized souvenir shirt for free than pay for a generic tour t-shirt.

These guys come out on the stage and instantly own it. They are dressed in giant costumes made out of everything from fur, to metal, to body paint, to inflatable antlers… everything. I think it would be so awesome to be their costume designer. Their characters fill up more than the stage, they fill up the whole venue. Yeah, it’s just an act, but it’s not hard to lose yourself in their act and start thinking that you are truly on another planet and part of a race war with some extraterrestrial life-form.

It doesn’t matter if you like metal music or not. The second the cold spray of the fake blood hits you, you’re having a great time. It starts as just a thin spray from some alien lifeform being decapitated. As the show progresses, the fake blood, and other bodily fluids, seems to flow like the beer flowing non-stop out of the taps of the bar.

The thing with Gwar is they are all about the theatrics behind a show. They don’t care who they piss off. I’ve seen Gwar “kill” everyone from George W. Bush to Justin Bieber. Last night, the victims were Hillary Clinton and a Fox News anchor. How do they “kill” them? Basically, they have someone wearing a mask with fake body parts that can be cut off and used to squirt blood on the crowd. (Use your imagination, I’m not going there in this blog). Then out come the big foam weapons that are used to kill the celebrities. Sounds dumb, I know. Sounds cheap, I know. But the way they do these “stunts” with such conviction and heart, that’s what makes the cheesiness of it all okay.

So, here I am, the day after the Gwar show sitting at my parents’ kitchen table while my step-mom makes some dinner. It’s almost 6 o’clock at night and I am still scrubbing away at my face to try and get this fake blood off.

Gwar is definitely the top live band I have ever seen, and that is truly saying something.

Butcher Babies— Is this a freaking joke? I mean seriously. Let me explain this band to you… two strippers were given microphones and told to scream. How are they famous and I’m not?!

Battlecross— They were freaking awesome. I highly suggest checking them out!

Apathy Syndrome— Local metal band in Des Moines but sadly, I missed their set due to stuffing my face with pizza.

Average Age of the Crowd- 20 somethings

Found in the Pit- Pools of blood… that sounds brutal doesn’t it?!

3 thoughts on “The Bloody Pit of Horror”