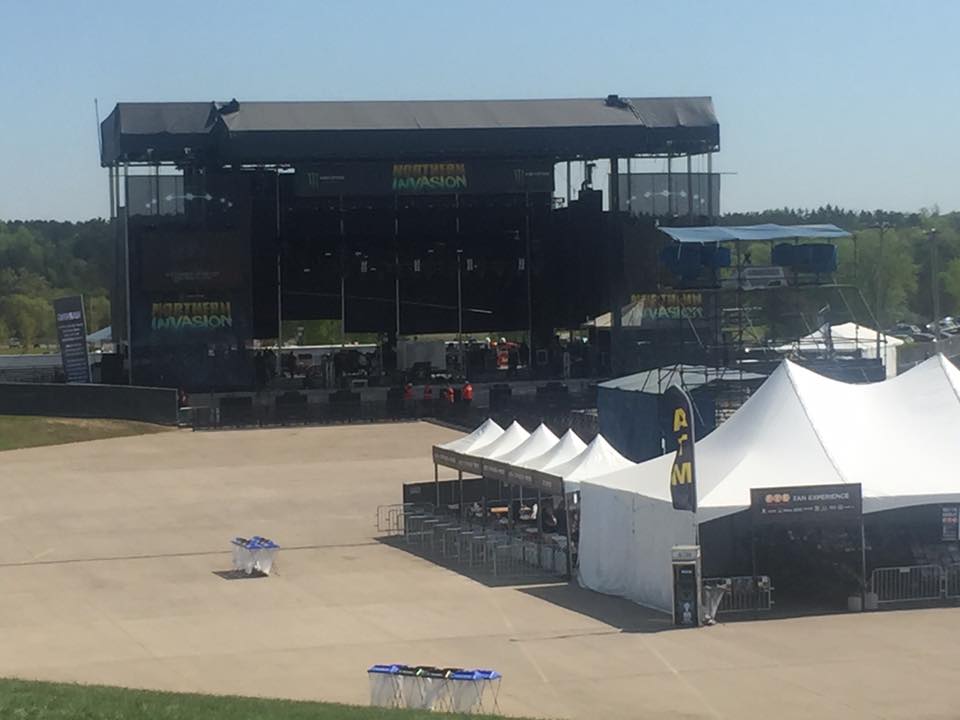 Well folks, festival season has begun. I hope you stocked up on sunscreen, energy drinks, and money for overpriced everything! Buckle up and brace yourself for a bumpy, exhilarating, and exhausting ride!

Yesterday was my first legit festival of the year and it was absolutely everything I could have asked for. Sure, some of the music wasn’t quite for me and it wasn’t one of the festivals that I get overly hyped for but it was a festival nonetheless and I was excited.

The day started off early with my photographer picking me up as I was still nursing my hangover from the Rock the Boat show. We drove the hour out to Somerset, WI and parked in the super exclusive media parking lot with our fancy parking pass. Okay, parking wasn’t glamorous but what happened next was like a dream. We walked past the group of people who had gathered near the gate and walked right into the empty festival grounds. It was eerily creepy but made me feel like a true rockstar. Dave (the photographer I work with at the other blog) showed me around the grounds. He showed me all of the vital spots like the Fireball Whiskey tent and the VIP bar that I had access to. As we made our way around the grounds, he led me up towards the main stage and through a tiny hole in the fence into a modest sized tent full of tables.

I had found myself in the middle of the media tent and it truly felt like I was living the rockstar life. I grabbed the first of many free Monster Energy Drinks from the cooler and just watched all of the podcast and radio guys around me setting up their computers and planning out their days. I didn’t want to get in anyone’s way so I made my way back out to the grounds just in time to see people flooding in. I headed towards one of the smaller stages to see some of the first bands of the day but before I knew it, it was 11:45 and it was time for me to do my first “real” interview of the day and of all time.

Sure, I’ve talked to bands plenty of times. I always seem to find myself next to them at bars or chatting them up at merch tables and just shooting the shit. I’ve never thought about standing with them, microphone in hand, and asking them legitimate questions. I’ve always been the type to talk to celebrities about the pets they left at home or the tacos they had for lunch. Those conversations are never recorded except for in my mind and here in this blog. I think I like the informality of it and it fits my personality and social awkwardness better than a formal interview. That being said, I’ve decided that this summer is the summer I break out of my shell so there I stood in the media tent, microphone in hand, waiting for the boys of Sylar to come through.

I was nervous and shaking as I approached Jayden and Miguel of Sylar. I introduced myself, shook their hands, and it was off to the races. I tried my best to not fan girl on them and it keep it professional. I admitted to them that this was my first legit interview ever and they seemed more than okay with being my guinea pigs. I started off by asking the typical questions about recording and touring and moved on to the questions that I actually cared about. Their favorite question was my one about how if they were to rob a bank, what would their getaway song be? (That’s for the idea Steve!) The two band members chuckled and it started to feel like it was just me and two friends shooting the shit. After a couple of minutes of my funny and quirky questions, the interview was no longer an interview and it was me being able to learn about this band I had been obsessing over lately. Miguel told me about his love for Taquitos from gas stations, how their van was broken into on Thanksgiving when they were in Canada, and how Jayden really liked 13 Reasons Why on Netflix whereas Miguel is more of a Planet Earth guy. I truly felt like a freaking rockstar as I shook their hands, thanked them for their time, and snapped a quick picture with them. Limp Bizkit’s “Nookie” was playing through my head as they walked away and prepared for their set. (That was their getaway song… “Nookie”… Yeah, I could see it.)

As I recovered from the nerves of doing my first interview and let the adrenaline settle, I made my way back out to the crowd and spent the rest of the day bouncing between stages and the media tent and just taking it all in. I got to see bands I had seen countless times and bands that I never thought I’d see or even wanted to see. There were highlights, low-lights and everything in-between.

I was able to catch Frank Carter & The Rattlesnakes just as Frank was making jokes about gingers needing to be careful out in the sun since “we are a dying breed”. I got to see the epicness that is Amon Amarth, a viking metal band from Sweden and ouldn’t help but giggle a little bit as I listened to Papa Roach playing through songs that took me back to the age of 13. I watched as The Offspring played through songs that my brother and I associate with different video games from growing up and finished off the night being truly impressed by Kid Rock (don’t judge me… he’s a damn good entertainer).

Yesterday was one of those days where I felt like a complete rockstar and I loved absolutely every second of it. I got to do my first legit interview with a band. I Got to hang out in the coveted “media tent” and got to see far too many bands to list. It was perfection.

It’s festival season. I’m currently taking donations of sunscreen, energy drinks, coffee, and money so I can keep up!

Crowd Surfers- Far Too Many To Count

Broken Bones- None Noticed But I’m Sure There Were Many

Passed Out People – 1 Witnessed- Multiple Not Witnessed I’m Sure