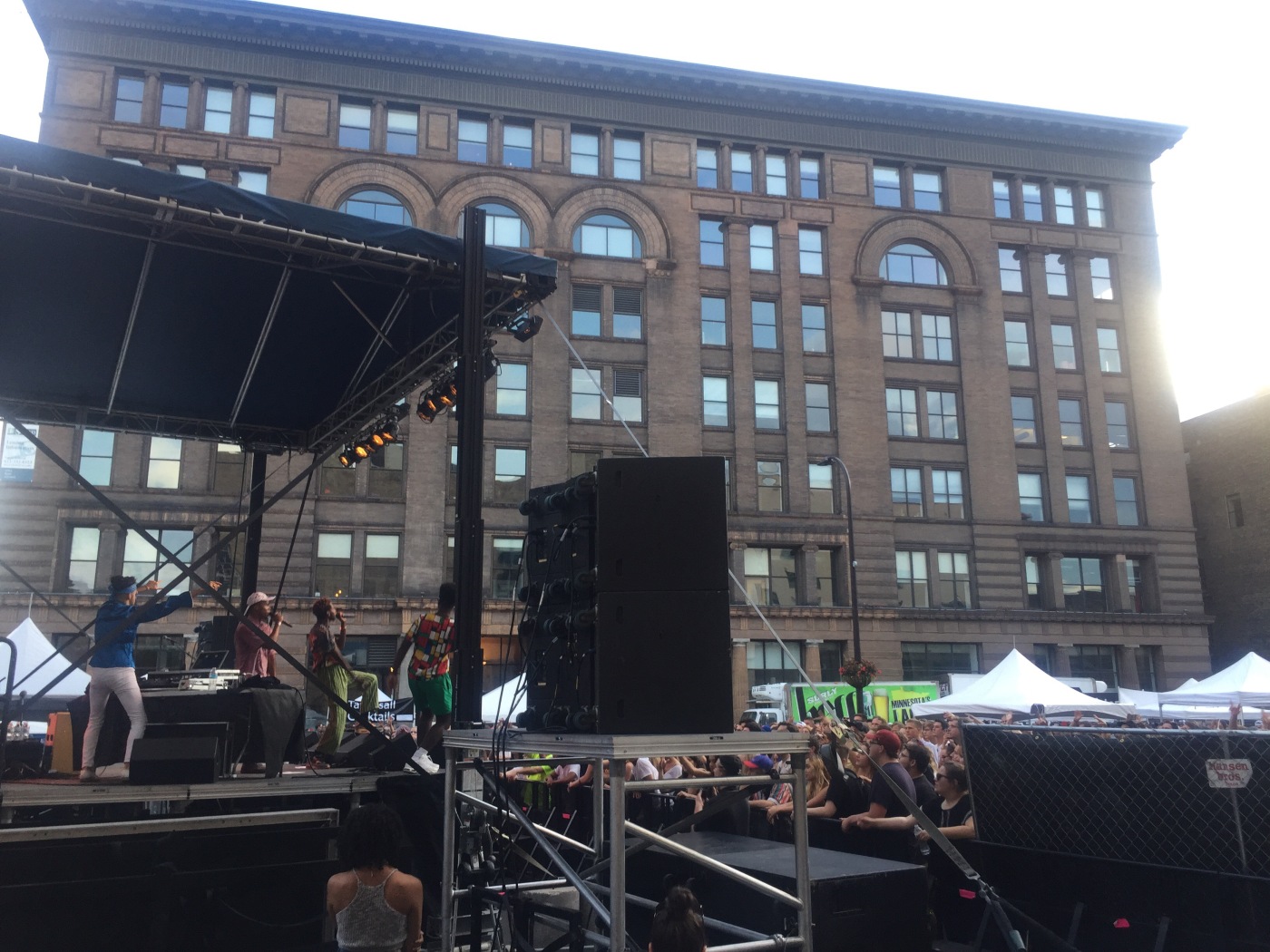 Minneapolis winters suck. There’s no denying that. Even if you love the snow and freezing temperatures, it gets old after the first couple of months. I truly believe that because of the long, drawn out winters up here, people go all out when it comes to outdoor events in the summer. The Pizza Luce Black Party was no exception.

There were a million things going on yesterday including (but not limited to) The Irish Fair, Polish Festival, the grand re-opening of the capitol (featuring live music from some truly popular local acts including Polica and Cloud Cult), Coldplay playing the US Bank Stadium and oh so many other events. With so many choices, it was hard to not just throw my hands up in the air with frustration and spend the day at home while binge watching terrible TV shows and napping constantly. That being said, I’m more than happy with my decision to check out The Pizza Luce Block Party

The day started out bright and early with The Modern Era. Unfortunately, due to a prior engagement, I didn’t make it in time to see them but I heard the chatter among the constantly growing crowd and instantly knew that I missed something good. My apologies to The Modern Era. I promise to catch you guys soon!

Fanaka Nation was second to take the stage and the first act that I caught. With a brand of hip-hop that definitely fits with the Minnesota style, Fanaka Nation was a great early act to get energy levels of audience members up. Fanaka’s words were spit with precision and the limited tracks behind his voice truly helped him shine. His set ended with a truly impressive dance break by Fanaka himself complete with flips and a handstand that seemed to last forever. Fanaka seemed to be a very young kid but the amount of talent he has is jaw dropping. Don’t be surprised if you start seeing his name more over the next couple of months.

The next set was brought to the crowd by Static Panic. Other than technical difficulties due to their computer overheating, Static Panic’s set was flawless and made you want to get up and dance. Saturday’s set was only this group’s fourth show but they came off as seasoned professionals as far as their live show and music was concerned. Their poppy dance anthems were upbeat and great for the hordes of people that had started showing up for the day of fun.

The stage was quickly turned over for four-piece local favorites Tabah. Their set may not have had the dance-y energy of Static Panic but it had an energy that definitely added something to the day. Their indie-rock sounds were calming in a way. Playing around 3PM, it was perfect timing for a slice of pizza and a cold beer all the while with their music creating the perfect ambiance. Although their music was calmer than the prior acts, there was no way to ignore what was going on on the stage. Singer Cecelia Erholtz has a voice that demands your attention without even trying while the rest of the band plays with a sense of professionalism that can sometimes be lost with local bands playing a local music festival. Tabah is heading out to the east coast to perform a couple of dates and you best believe that they will no longer be Minneapolis’ best kept secret after that.

Fury Things was up next and, within just a song or two, I knew they would be a new favorite of mine. With the energy of any of the best punk bands but a sound that was closer to pop-punk than anything else, Fury Things had a sense of fury (see what I did there?) that was perfect for an outdoor festival. I had heard great things about these guys prior to seeing them last night. Most people mention singer Kyle Werstein’s energy and his likeness to Angus Young’s (AC/DC) stage presence as one of the key selling points of this band. Unfortunately, due to a bum arm, Kyle seemed to be a bit off his game (rightfully so) according to the people I was talking to but I didn’t see it. Even with his arm all wrapped up in a cast, Kyle had an infectious energy about him. I had heard of this band prior to yesterday but really had no reason to drop everything and check them out… now I do. Fury Things– you’re a new favorite of mine.

Minneapolis hip-hop queen Sophia Eris follow Fury Things set with a set full of girl power and talent. Sophia is a staple in the local hip-hop/rap scene for a reason. Her creative lyrics and charming personality has truly made her a force to be reckoned with and one of the acts poised to break through the local scene into bigger and better things. After working with Lizzo for awhile, Sophia has gone solo with her own recordings and now live shows and it works. I don’t know why it took her so long to do her own thing but I’m glad she’s doing it now. She effortlessly commanded the attention of the packed parking lot as she used her voice to mesmerize the audience. Sophia’s set could have gone on for hours and I don’t think you’d hear a single complaint. What a bright spot in the already bright local music scene.

HALEY (formerly known as Haley Bonar) was up next and continued mesmerizing the crowd with her beautiful voice and tasteful indie rock music. Much like Tabah, HALEY seems to be a favorite throughout the Twin Cities but that favoritism is not unjustified. There’s something about her music that, even though it’s not my typical cup of tea, had me completely in love with this woman and her band within a couple of notes. She plays with a sense of conviction and passion that is undeniable. The charming smile that graced her face throughout her set only added a little sparkle to the already shining set. Much like Sophia Eris, HALEY probably could have played for ten times longer than she did and you would hear no complaints.

Second to last was Allan Kingdom- a local hip-hop artist that will definitely be the next one to break out of the Twin Cities scene and onto the national scene. His energetic set was punctuated by a couple a couple guest appearances including one from a personal favorite- Finding Novyon. Whether he had friends on stage or was just on stage with his DJ, Allan Kingdom proved to the crowd why he is as big of a deal as he is. It felt as if majority of the crowd had come just for him and, for those who didn’t, it would be easy to say that they left with a new appreciation for this powerhouse.

Wrapping up the nine act block party was Craig Finn of The Hold Steady. Craig was the perfect ending to an already perfect day with his iconic lyrics and quirky stage presence. Craig dazzled the audience throughout his set of upbeat indie-pop-rock songs full of the same quality of lyrics that catapulted The Hold Steady onto the international scene. With such a big name headlining the free festival, it was no wonder why the crowd that had been growing throughout the day finally hit the highest point as far as attendance and energy.

The beer was flowing yesterday and the pizza slices were flying out of pizza boxes. It was another day of me being treated like royalty with my press pass granting me all you can eat pizza and all you can drink drinks along with a chance to stand among the performers and other local celebrities that had come out for the festivities. The weather was beautiful, the atmosphere was beautiful and the day was perfect.

Thank you Pizza Luce for throwing such a great event for everyone in the community to join in on.

Show on Deck-  The Rocket Summer