The Pit’s Our Church 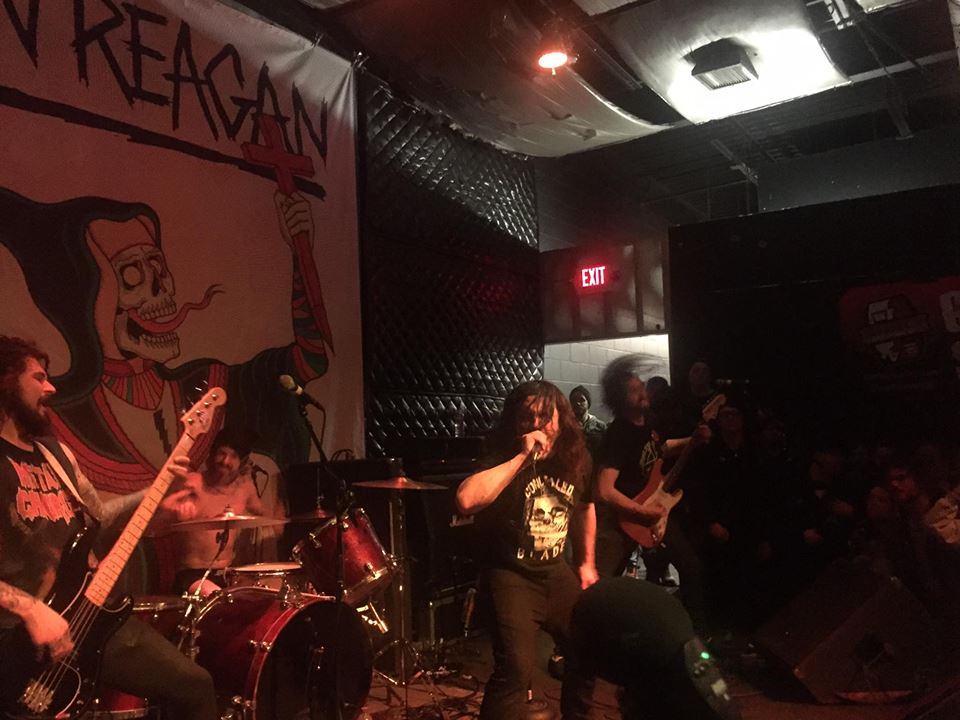 With a 9 o’clock start time, I was kind of dreading the show last night. Sure, I can be a night owl when I want to be but, on a Monday after working my day job with the inevitable 5:30AM alarm the next morning, starting a four band bill at 9 o’clock seemed a bit like torture.

The show started with a quick set from local group Wanderer. They blasted onto the stage with a chaotic sound and stage show. Unfortunately I was unable to hear any vocals during their set but, in all honesty, I didn’t have to. I could feel the intensity behind the vocals just by watching singer Brandon Carrigan as he stormed around the stage. As I mentioned, their set was quick, almost too quick. Lasting only about twenty five minutes, Wanderer’s set left me wanting a bit more because I loved the intensity of it but, at the same time, it was nice to know that the show was moving along and maybe it wouldn’t be as late of a night as I had thought.

Call of the Void from Colorado was up next and to say I was excited to see these guys would be an understatement. I had caught them a couple of months ago when I wandered into a show with a friend and was more than blown away. Much like the crowd (more on this later), Call of the Void’s music blends punk, metal, grind, and hardcore into their own unique brand of music.

Their music is fast and dirty while still possessing a sense of beauty behind it. It took me awhile to figure out where the energy radiating off the stage was coming from. Usually you can pinpoint a member who just can’t stand still and seems to be egging on the crowd in a way but I didn’t see that with these guys. It quickly became clear that the energy the crowd was feeding off of, the energy that got the pit swirling in the middle of the venue, was purely from the music. Don’t take that to mean that these guys were boring to watch in any way, shape, or form, because they weren’t. They didn’t need to be running around to entertain the crowd. They are true masters of their craft and being able to see how quickly they can play yet still keeping the sound clean was truly enough to keep me entertained.

I expect to see a lot more from these guys in the future. When I stumbled into their show a couple months ago, I could tell people were into the music but hadn’t been able to study it yet so were unable to sing along or predict what would come next. It was made clear last night that these guys are truly taking the scene by storm. The nearly sold out crowd was eating up every single lyric and every single riff like they couldn’t get enough. I mean, let’s be honest, I couldn’t get enough. Make sure you keep your eye on these guys and see them in a small intimate venue while you still can!

Iron Reagan was the next band on the bill and the band that made it possible for me to justify being out so late on a Monday night. I wish I could put a Iron Reagan set into words for you but I truly don’t think you’ll understand the feeling you get while standing in a crowd with them on the stage without actually being there.

Iron Reagan’s music was a bit more thrash than the bands that had graced the stage before them but, like the other bands, these guys have their own blend of a little bit of everything. There are elements of thrash, punk, hardcore, metal… You name it, it’s in there. That’s the reason I fell in love with these guys in the first place. They were able to take all of my favorite elements of so many genres and make it into something truly beautifully unique. With members of Darkest Hour, Municipal Waste, CannabisCorpse and too many other influential bands to list, these guys are a bit of a super group but they don’t act like it and that’s part of their charm. They seemed humbled by the crowd participation but I don’t quite understand why. Every time I’ve seen them, the crowd support has been amazing and last night was no different.

There seemed to be a stream of people hopping up onto the stage and then jumping out into the crowd. There were people doing flips, people just barreling into the first couple rows of people, there were bodies seriously everywhere. At one point, singer Tony Foresta decided to turn the monitors at the front of the stage on their side, making a bit of a platform. I thought this was so Tony could see the crowd better (he’s a pretty tiny guy but don’t let that fool you… he has more energy that most frontmen of the most intense metal bands I’ve seen) and that could have been the reasoning behind the re-positioning but the monitors quickly turned into a diving board of sorts for the fans. There was pushing, shoving, bodies falling from the sky, people falling down… to an outsider, I’m sure it looked like a violent blood bath or something but to the people involved, it was beautiful.

Tony stopped in-between the last couple of songs to mention the beauty that he saw. Here we were at an infamous punk rock club listening to thrashy punk rock. It didn’t take a magnifying glass to see the melting pot that was this crowd. There were punk kids, hardcore kids, metal kids… much like the music, there was a little bit of everything. Tony pointed out the fact that even though there were so many different facets in the music scene being represented at the show last night, everyone was together as a family. Everyone was being nice and courteous. Even when the pushing and shoving seemed extreme you could hear “sorry!” being shouted throughout the crowd when a beer was spilled or a toe was stepped on. Sure, Iron Reagan’s set was amazing but the real beauty was found in the crowd.

Finishing off the night was Power Trip but, honestly, I had no clue how anyone could top Iron Reagan’s set. The band took the stage with the smoke machine adding to ambiance of the set. The crowd instantly started the pushing and shoving back up and the bodies started flying again. Much like Iron Reagan, Power Trip seemed to lean towards the thrash side of things while keeping a very unique sound about them. They had a strong presence on stage and, like the other bands, had the crowd eating out of the palms of their hands.

Unfortunately, I made the mistake of checking my phone and realized it was nearly midnight. I instantly felt the tired feeling that I had been ignoring all night and the reality  of having to fuck with parking at midnight in Uptown and the 5:30AM alarm caught up to me. All of that, combined with the fact that there was no topping Iron Reagan, had me checking out of the show a bit early.

I stayed out a bit later than usual last night and I am definitely feeling it today. That being said, being able to experience a show like last night’s makes the exhaustion and crabbiness of today more than worth it.

Call of the Void