They Can Cover Their Ears But We Won’t Stop Screaming! 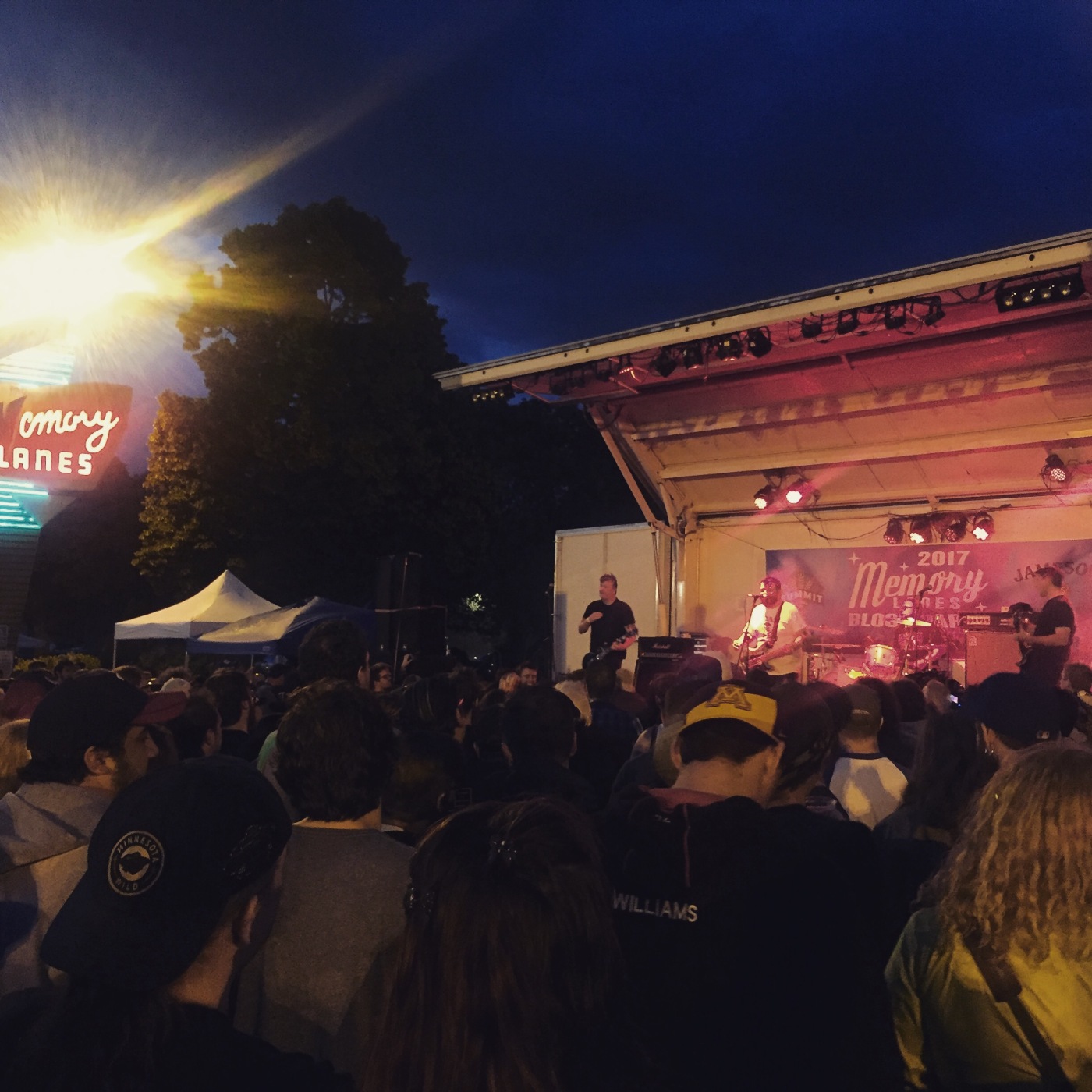 The fun continued yesterday with day two of the Memory Lanes Block Party. It was yet another day full of good friends, cold drinks, and great music. Even though the crowd was a bit bigger than it had been on Saturday, the atmosphere didn’t change at all. Everyone at the block party had a smile on their face and went home with a couple more friends than they had arrived with.

Black Market Brass kicked off the day with their upbeat brass band sounds and good vibes. It was the perfect start to a long day of amazing local music. These guys have become a bit of a staple in the local music scene and they are never boring to watch live. It seems like every time I see them, their music is a little bit different. Sometimes their music has a bit more of an afrofrunk sound, sometimes it leans a bit more to jazz, and other times it can lean a bit more towards just a straight up brass band. Yesterday was one of those days where Black Market Brass felt more like a straight up brass band and it fit the day absolutely perfectly.

Up next was Malamanya. I was intrigued by their name but, as they took the stage, I realized I had seen these guys before. I was instantly excited as soon as I realized who this band was and what was about to happen. Malamanya have to be one of the best Afro-Latin bands in the cities. Their music is clean, fresh and makes you want to dance. Many couple had claimed their spots near the front of the crowd for some traditional salsa dancing. I may not know much about this whole scene but I know that I was loving Malamanya and, like Black Market Brass, they were a perfect fit for the day of music.

Crankshaft was up next. After two groups with a bunch of band members in them, it was kind of funny to see one guys set up on the stage and get ready to play. Even though he was just one person on that stage with a guitar, he commanded the crowd as well as the two prior groups with nearly ten members. His bluesy sound mixed with the conviction in his voice had me hooked and in love within just a couple of words. Although his music wasn’t as upbeat as the previous two bands, there was no lack of energy and the growing crowd was clearly loving it.

The next band to take the stage was one I had never heard of before but instantly became one of my favorites of the day. Liquor Beats Winter had a kind of blues feeling to them that made them the perfect follow up to Crankshaft. Even though the base of the band is blues, there’s an undeniable punk influence throughout their music. It was a unique sound without being too out there as to not understand what they were trying to do. Even when the trumpet came out, it still made sense and fit perfectly. The four piece commanded the crowd and a dancing pit had broken out near the stage. Their music was the epitome of block party music. You wanted to smile, dance, drink, and just have a good time while they played and that’s exactly what everyone seemed to be doing.

Tony Peachka was up next and captivated the crowd with their brat punk sound and fuck em all attitude. This band has definitely been a buzz band in the area for a while now but yesterday was the first time I had a chance to see them. Although I’m not quite sure I’m sold on their sound, I’m more than sold on their attitudes and the grind they are clearly doing. The three girls in the group are young and are really doing it. They seem to be constantly playing and just being in the local spotlight which is a hard thing to do when you live in a city with such a huge local music scene.

Monica LaPlante graced the stage after Tony Peachka. Monica, like Tony Peachka, has been a bit of a buzz band in the area and is definitely picking up steam. I had the pleasure of getting to see them two weekends ago at the Fulton Block Party. I loved them then and I loved them yesterday. Monica has a very smooth tone to it but a sense of intensity that you would expect from a punk singer. The backing band allows Monica to steal the spotlight but also makes it impossible for you to ignore them. They are so tight and compliment Monica’s voice so well that it makes for an amazingly perfect set.

After a couple more drinks and a quick bite of food, it was time for The Birthday Suits. Unfortunately, as soon as they started playing, I felt a lone raindrop hit my arm. All I could think was that there was no way I was going to have a repeat of last weekend and spend the rest of the night soaked so my friends and I headed for the beer tent to wait out the rain. The rain came and went fairly quickly but still left everything in it’s wake soaked. Even with the sudden downpour, nothing was going to stop The Birthday Suits as they played through their set of unique rock music. The duo never missed a beat and, even though the crowd headed for cover, they were quick to claim their spots by the stage as soon as the rain let up. Much like Crankshaft, even though there are only two members in The Birthday Suits, there was no lack of energy or control of the crowd. It truly felt and sounded like I was watching a full band.

As The Birthday Suits ended and the stage was turned over for headlining act Dillinger Four and my excitement grew. If you’ve been reading this blog for a little bit, you know that I’m a huge fan of Dillinger Four and never miss a chance to see them. They took the stage last night and did exactly what I love them for. They had a banter that you only get with these four men. They joked, laughed, and drank their way through the set and I was quickly reminded why these guys will forever be one of my favorite local bands. Dillinger Four’s influential punk music was the perfect ending to an already perfect day of local music. Out of all of the bands that played yesterday, these guys are obviously the most notable but it didn’t feel like that. Like every other time I’ve seen Dillinger Four here in the cities, it feels more like just watching a local band than a world renowned punk band.