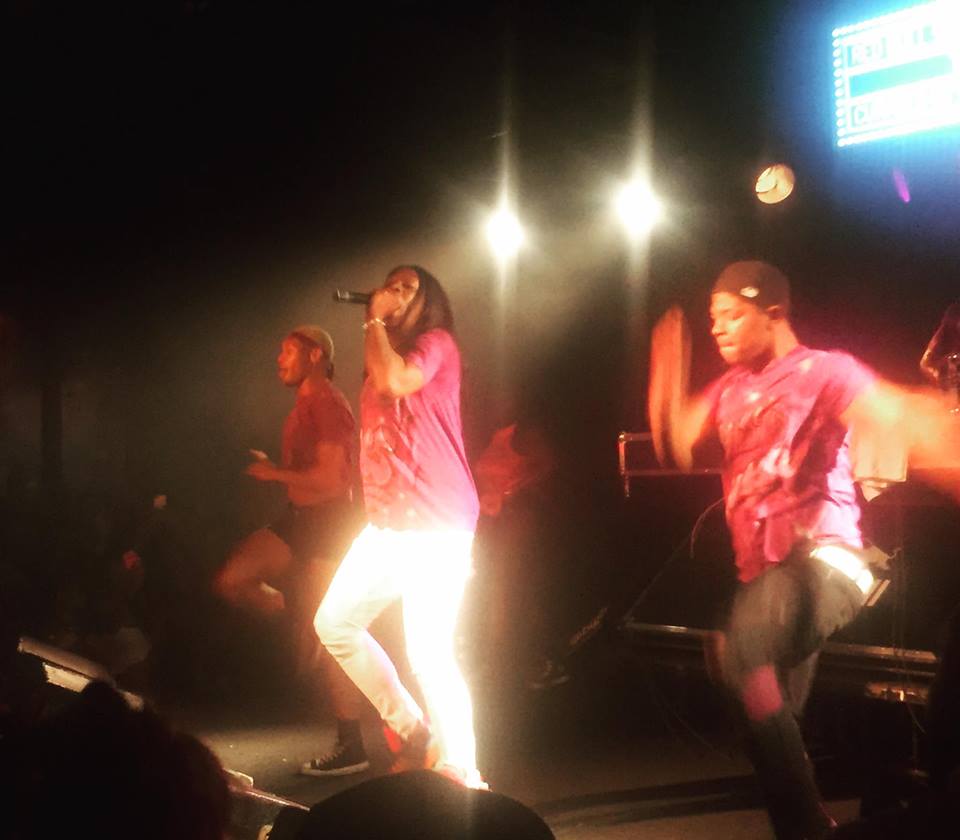 The queen of bounce was in town last night and there was no way I was missing it. I found myself watching Big Freedia two years ago at a local block party and since then have been in love with this queen diva. With a fierce attitude and insane energy when it comes to live shows, Big Freedia is everything I needed to spruce up my Wednesday. As if seeing Big Freedia wasn’t enough to make my Wednesday sparkle, last night’s show seemed to act as the un-official kickoff to this weekend’s Pride festivities– yeah, it ended up being an absolutely fabulous night.

Last night’s show was a Red Bull Sound Select show. I’ve written about how amazing these shows are but in case you missed it- These shows have line-ups full of the best up and coming artists out there. With a ticket price of only $5 if you RSVP online and $5 Red Bulls, not only can you find a new favorite band or act, you can also have a damn good time doing it without breaking the bank. I haven’t fallen in love with every act I’ve seen at these shows but I haven’t hated any of them either and always leave with a couple new friends. They are a great event and I’m so happy to be in a city that has them somewhat regularly.

When my friend and I walked into The Cabooze, we were greeted with a mix of some of today’s hottest rap and hip-hop songs being spun by DJ Keezy (who would end up being the DJ for the first couple of acts). The feeling in the venue was electric and I couldn’t help but forget that it was only Wednesday as I sipped on my drink and watched everything happening around me. People were dancing, hugging, laughing… it was such a positive atmosphere that, not only did I feel comfortable, I felt comfortable enough to let loose and dance around a little bit.

The first act to take the stage was Lex Allen. As soon as he took the stage I couldn’t help but notice his sparkly black romper and the fact that he has nicer legs than I could ever hope to have. As soon as he started his set I was in love with not only his look, but his voice. His voice had this smoothness about it while still having a harsh edge. His dance moves were on point as he sang his way through his short set of genre-bending songs. I’m not quite sure how I would classify him. The smoothness of his voice leans towards R&B but the modern twist makes it feel a bit indie-pop but when you start hearing the subtle harshness, you get a tinge of straight up rap and hip-hop mixed with a bit of an electronic feel. Regardless of how you want to classify Lex Allen, I was super impressed by his set and can not wait to see more of him.

Zed Kenzo instantly took over the stage with her own unique style that somehow complimented what Lex Allen had just done. All of the performers last night brought a positive vibe to the show last night but something was different about Zed. She just radiated positive vibes and talent. I was falling deeper in love with this lady with every single note. Zed may be a small girl but her voice is anything but and is as powerful as any metal singer I’ve seen. Her set seemed way too short but, even in that short time, she was able to convey a sense of ferocity that has made her unforgettable in my mind. After her set, my friend and I ran into her and praised her live show. I was instantly struck by how personable she was as she asked for both of our names, gave us giant hugs, and continued to have a conversation with as until the next act took the stage. To say it was heartwarming would be an understatement.

CupcakKe (born Elizabeth Harris) was up next and although her lyrics and attitude was a bit much for me, she performed a flawless set full of energy. Her hyper-sexualized lyrics caught me off guard at the beginning of her set. As I said, it was a bit much for me but, after a couple of songs, I tried to look at it as just a joke (maybe it’s meant to be that way?) and really started to enjoy her set. CupcakKe’s attitude was unrelenting and cutthroat. Although I don’t think there was a single point during the show last night where the crowd wasn’t dancing and twerking along to the music, the packed venue really seemed to hit their stride during CupcakKe’s set. Although I’m not a dance and have no booty to shake, I found myself trying to join in the best I could.

Finishing off the night after a quick DJ set from Shannon Blowtorch (a local favorite of mine) was the queen diva herself, Big Freedia. This was the third time I’ve seen her (Okay, full disclosure, she’s not transgender, just a gay man who has some of the nicest hair I’ve ever seen and carries a purse. She prefers to be referred to with female pronouns so that’s what I’m going to do.) and I am always thoroughly impressed by her energy, dance moves and her dancers. Even though I go to a show damn near every single night, seeing a Big Freedia show is a completely different experience.

Big Freedia has truly put bounce music on the map and has made it what it is today. Bounce music originated in New Orleans and is very upbeat hip-hop music. It’s the type of music where, even if you have no clue how to “twerk it”, you can’t stop yourself from trying. With call and response parts a-plenty, it’s hard to not get involved during a show like this. Even if you try to resist, the people next to you will have you dancing and shouting in no time.

I’ve always been impressed with Big Freedia’s energy and the energy of her three dancers. It’s non-stop from the second they hit the stage until their final goodbyes as they leave. Even with a bandaged up hand, Big Freedia danced her heart out throughout the set and truly looked like she was having a grand old time. Watching her dancers as they twerk their way across the stage is nothing short of mesmerizing and I’m pretty sure my jaw hit the floor when the sole female dancer had made her way up to the small balcony and was twerking off the side of it. It’s not that I was surprised as this particular dancer always seems to pop up in the oddest spots, but it’s still jaw dropping to see.

Big Freedia’s set went into the wee hours of the morning but my friend and I didn’t notice that until we got in the car and realized just how late it was. It’s great when a show can make you forget about absolutely everything. Last night was perfect and exactly what I needed to get through the rest of this week.

Show on Deck-  The Pains of Being Pure At Heart