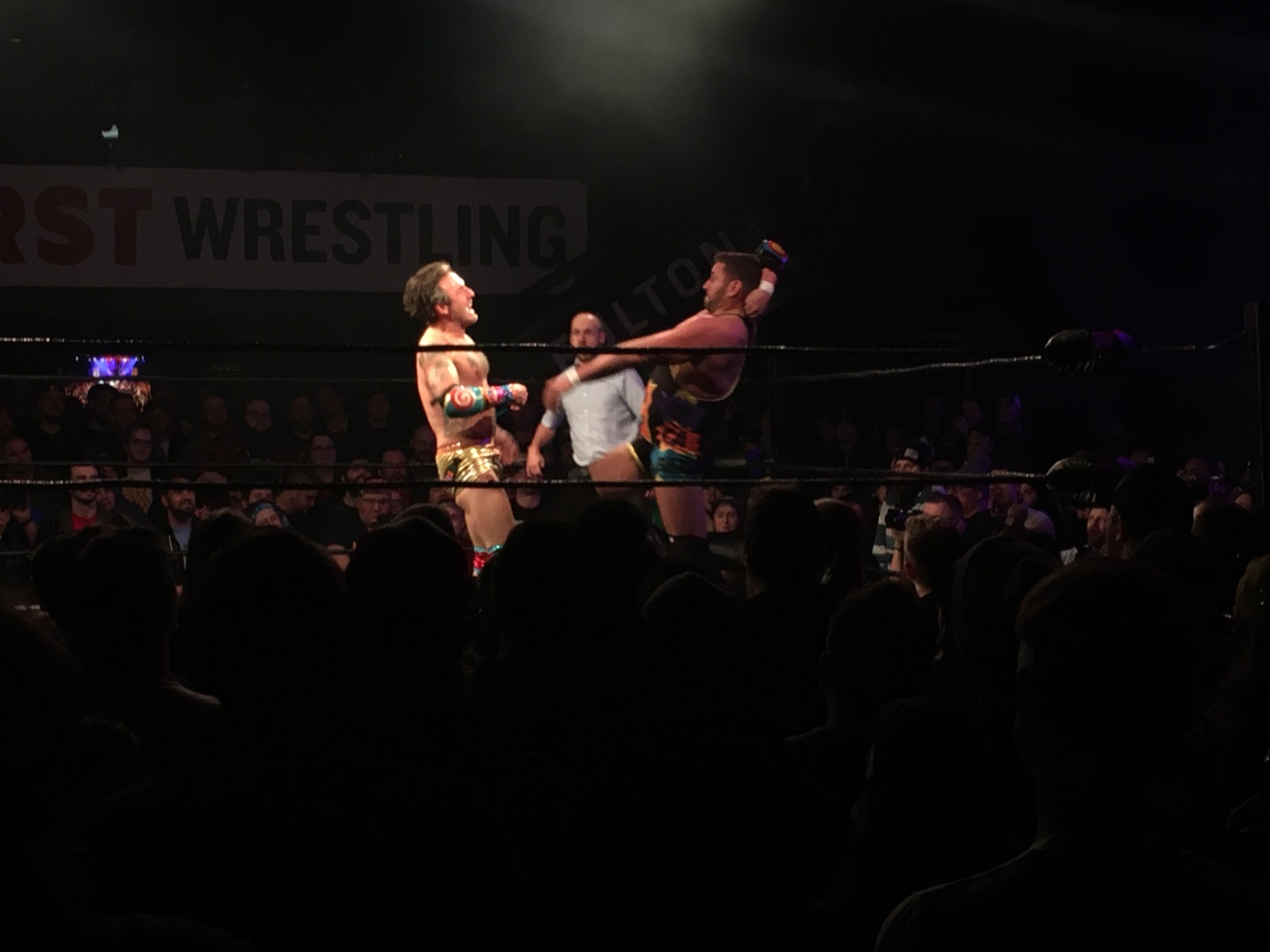 With Sunday night being night number two of wrestling for me, I’ll spare you the details of exactly what Wrestlepalooza is and how amazing of an event it is. (Okay, I won’t get in the gritty but you don’t get out of me praising the crap out of this event.) Feel free to just scroll back a couple of articles and read all about night one at this brilliant show. Although Saturday night was amazing, Sunday night somehow topped it. Maybe it was because of the legendary (and a personal favorite of mine) Dillinger Four being the musical guest of the night or maybe it was just the vibe in the room. Although both audiences were rowdy, Sunday night was rowdier and I instantly regretted my decision to be an adult and not get too wild what with work looming ahead of me on Monday morning.

Being the first year that this event took over two back to back nights at First Avenue, I was a bit nervous if there would be a difference between the two. Obviously the crowd was different but would the wrestling, music, and burlesque dancing really be different enough to make this event work with two back to back nights? I don’t know why I worried at all. I mean, this event is put on by professionals and they definitely knew what they were doing. Both nights had a different vibe, a different sound, and a different view making me more than happy that I had the opportunity to go to both nights instead of having to choose one or the other.

Although most of the card for Sunday night had been announced online, there were a couple of surprises throughout the night including that first match I referenced in my opening. Wildcat is definitely one of my favorite wrestlers from this event and when I didn’t see his name or picture on any of the advertisements I was honestly a bit bummed but when the night kicked off with a surprised appearance from him and a couple other of my favorites, I knew I was going to be in for a night full of surprises. From the match to the match between Colt Cabana and the legendary David Arquette (Congrats to Arquette for the win!), each match was more exciting than the last when it came to Sunday night.

I wish I could tell you which match was the most exciting but I honestly can’t. Yeah, it was absolutely amazing to watch the legendary David Arquette as he took down the almighty Colt Cabana and The Great Sasuke was at it again although he lost to Darby Allen. The no disqualification match between Arik Cannon and Darin Corbin left tacks, baking trays, and a trash can littering the ring along with drops of blood from Arik’s head. Watching Air Wolf defend his championship title against both Shane Strickland and DJZ was another highlight and I had my jaw on the group throughout the entire match and cringed at every high flying move that ended with a deafening thud onto the ring.

Beyond the amazing wrestling was the music. Now, full disclosure, Dillinger Four is one of my favorites so obviously they killed it. All bias aside, D4 was the perfect band for this event. They have performed before in the past and I hope they do it again soon. Their banter and inability to take anything seriously made for two quick sets sandwiched in-between wrestling matches that probably could have been twice as long without any complaints from the sold out audience. They had the audience laughing at times and singing along to their angsty punk songs the rest of the time. With only two fifteen minute sets, D4 nailed it when it came to their song choice and although there was a lot of joking around between songs as there typically is at a D4 show, they were able to perform all of my favorite songs. Although the music from Dimitry Killstorm and his friends on Saturday night was amazing, something about D4 was just beyond perfect.

Although the night was all fun and games for majority of the time, Arik Cannon took a couple of minutes to thank the crowd. Kind of the mastermind behind this event, he has watched it grow from one night that was almost sold out to two back to back sold out shows. With blood dripping down from his forehead, he took a moment to put his PBR down and honestly just thank the crowd for everything. Now, wrestlers are obvious bad ass guys that don’t get hurt and would never cry in the ring but you could hear the amount of emotion in Arik’s voice as he said thank you and it was hard to now get wrapped up in the emotion. He truly has created an empire that so many people have fallen in love with. Although it was him thanking the audience, the sponsors, the venue, and everyone else, it should have been the audience thanking him. Arik and F1rst Wrestling have created a monster and I am so thankful to be part of their adventure.