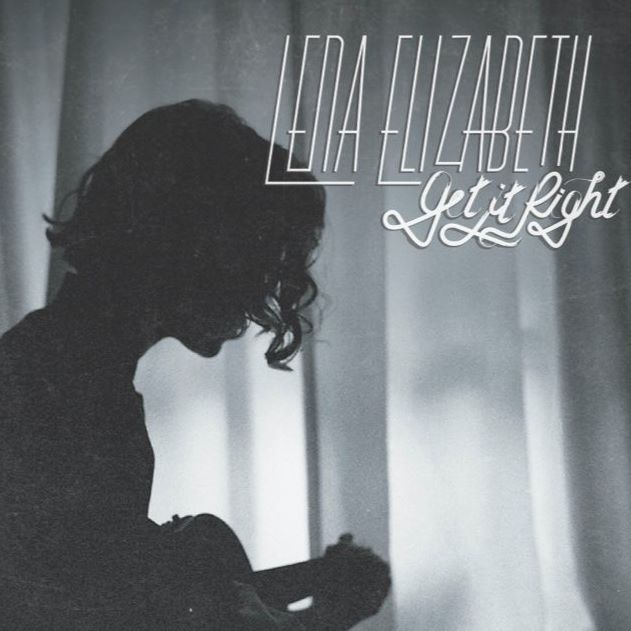 I like to look at an album cover before putting it in my stereo and make assumptions just to see if everything will line-up. When looking at Lena Elizabeth’s ‘Get It Right’ album, I really couldn’t get a vibe. A black, white and gray cover with very little as far as clues to what I was going to get, but it also intrigued me. Would it be a singer/songwriter type situation or something a bit more angsty and energizing. Sitting here at my desk on a beautiful Saturday morning with the windows open and the coffee brewing, I have to be honest, I wanted that more energizing sound and, well, that’s exactly what I got.

The vocals that kick off “Loaded Gun” say it all. After a few seconds of silence, it hits you and then falls out almost as quickly as it came in giving way to a calm and beautiful vibe. The juxtaposition of those first few second of this opening track compared to the rest definitely sets the tone for this ten song album. Lena’s voice instantly takes the spotlight. It’s smooth and has a style to match but there’s something almost aggressive about the voice. It commands that you listen to it and feel the words, not just hear them and, with the brilliant and beautiful lyrics that this album has, I have no complaints about that command.

“Crazy For You” starts with a jazzy piano which will get me every time. A syncopated rhythm matches the choppiness of Lena’s voice with perfection. Although words seem to be choppier in this song compared to “Loaded Gun” you can still here Lena’s signature sliding vocals that dance from note to note with a sense of ease. “Nobody Wants You” slows things down a little bit but the way “Crazy For You” flows into it is completely natural somehow. The chorus of this song brings a little country twang that, deep down, I knew was there throughout the first two songs but hadn’t been brought to the spotlight. Bringing that country twang to the spotlight, this song stands out on the album while still feeling completely part of it as a whole. It shows the true talent behind Lena’s voice, her styling, and her music.

Track four, “Dementia” has a dark undertone to it that I just couldn’t get enough of. A song that takes you on a journey through a dark place but has little spots of light peeping through, this is a great day dream song. Lena’s voice mixed with the simplistic drum pattern and the haunting slide guitar in the background create a whole atmosphere which is something that is hard to do correctly but, when done perfectly (like Lena does) it truly catapults you into a dream world. This track is constantly building and in about the last minute Lena wakes you up from your daydream with ease with a sense of power in her voice that commands your attention. She could have ended the song on this epic crescendo but, instead, ends it back in a dream world  before ushering you into “Evermore”.

“Evermore” is one of my favorite tracks on this album. I love the way Lena’s voice spans octaves but, unless you’re listening for it, you may not notice it. Although the jumps from low to high vocals shouldn’t be natural, there’s something so natural about the way that she does it leaving me more than impressed and listening to this track over and over again.

The title track “Get It Right” is another one of my favorites. Starting off with claps and stomps, there’s something about it that is so damn infectious without being annoying. Even on the first listen it had gotten stuck in my head. That hidden aggression in Lena’s voice seems to come to the spotlight as each time she sings “Calm the feeling down”. She seems to attack the word “calm” more and more every time she says it. I adored the way the song built and built throughout. The final moments of this song are full of power from Lena’s voice to the backing vocals to the clap and stomp sound that had, at some point, turned into drums (what a brilliant move there) but then they start to pull back as if the aggression is gone and things are getting back to normal.

The lyrics in “Love Me So” are something to be mentioned (along with the rest of the lyrics throughout this album to be frank). A bit cryptic but also painfully relateable, these are not your average love songs. Sure, they are about love and love lost but they avoid being glamorous and stick to being honest. One of my favorite lines in this song would have to be “Worried girl don’t you know, under fed always come back for more. Never was one to say no.” Just let that sink in for a bit while I listen to this song a couple more times.

“Wasted” start off with a jazzy bass line that instantly had my ears perking up a little bit more than before. Although almost to the end of the album, this is a new element that had been hidden throughout the previous songs but was now being brought to the spotlight. Much like the country twang that was highlighted in “Crazy For You”, “Wasted” brings a jazz element to the spotlight that you knew was there all along but then it’s quickly hidden back into the mix as the album moves onto “Always”. More of a classic love song compared to the rest of the album, “Always” made me stop everything I was doing and just sit there and let the waves of music take me over. Slowing things down and quieting everything from the vocals to the instrumentation, this track shows the pure beauty behind Lena’s voice, songwriting, and everything else.

The album closes with “Go On Home”. This track is three and a half minutes of pure bliss and a perfect track to end this album with. Instead of ending it with a bang, this track closes out the album with quiet beauty and a perfect reason to start the journey through ‘Get It Right’ all over again. A simplistic song lyrically but complicated and powerful when it comes to presentation, it truly is the perfect ending.

My Favorite Track(s): “Evermore”; “Get It Right”

Chances Of Getting A Noise Complaint While Listening To In An Apartment: 4.3 out of 10

What My Cats Thought Of It: Artemis was pacing between my face and my computer so if there are any typos please blame him; Autumn was sunbathing in the other room