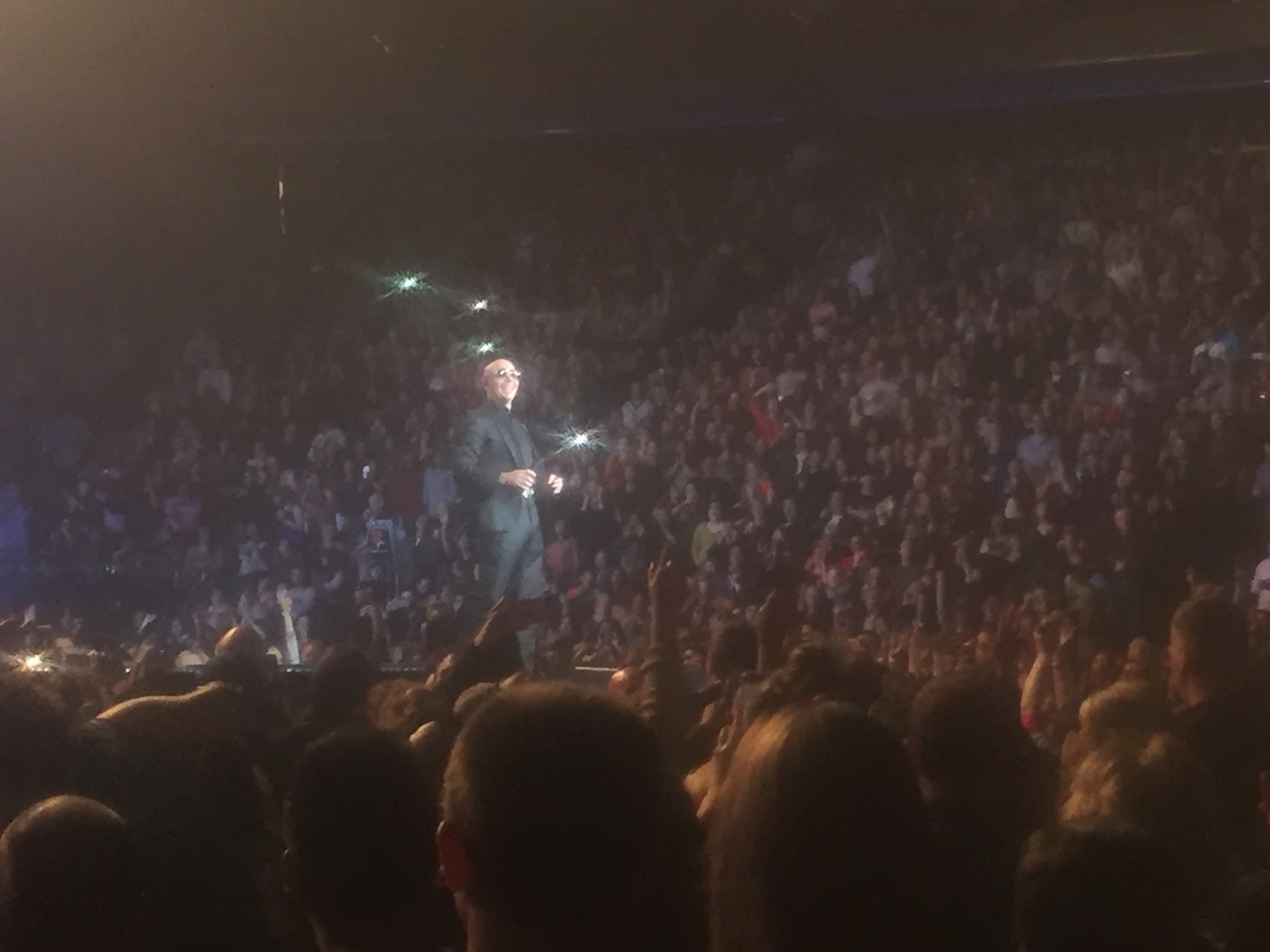 It’s not that Pitbull or Enrique Iglesias were on my bucket list of people to see live but, when the opportunity came up, I just couldn’t say no. I mean, come on, it was Enqirue Iglesias. What girl my age didn’t love him growing up. And then Pitbull- one of my many guilty pleasures that, for some reason, I just can’t get enough of. After grabbing a couple of drinks with a friend and visiting with the squirrel that lives near the patio at our neighborhood bar, I headed to downtown Saint Paul for the giant arena show.

I went up to will call, grabbed my ticket and got in one of the long security lines to get into the actual venue. As I stood there waiting for my turn to go through the metal detector, I took my ticket out of the envelope to see how far and fast I would have to run to get to my seat before Pitbull took the stage. I glanced at it as I got closer to the metal detector and couldn’t believe my eyes. Row 1. Seat 5. WHAT?! I went through security, got my ticket scanned and then looked at it again just to make sure I was right. There it was. Row 1. Seat 5. Section 117. I was freaking out as I rushed to the other side of the arena to take my seat.

I was taking my seat in the first row as the stage was being prepped for Pitbull and was instantly taken aback by just how damn close I was. After meeting the lovely couples sitting on either side of me, the lights started going down and a video hyping up Pitbull started. I instantly rose to my feet and a giant smile crept across my face. After a couple minutes of a video explaining that Pitbull is more than just a rapper/ producer and talking about how much of an inspiration Pitbull is (which, I actually agree with especially after he used his personal jet to transport people from hurricane stricken Puerto Rico back to the United States). As the video came to an end, the lights went down again.

As Pitbull appeared on the stage, the smile on my face grew to a size that was literally painful. His unique rapping style blared through the speakers joined by his backing band playing their recognizable Cuban and Latin infused beats. His set was upbeat and full of exciting elements including smoke, fire and his beautiful dancers that easily stole the spotlight from Pitbull when they joined him on stage. It seemed like every song he played was a hit. I was honestly a bit shocked when I realized just how many Pitbull songs I knew.

Majority of his radio hits were songs done with other superstars including, a personal favorite of mine, “Timber”- a song he did with Kesha. Clearly Kesha wasn’t at last night’s show but that didn’t stop Mr. Worldwide from performing the song. The way he would just play the vocal tracks for the missing superstars throughout the set was something that I actually really liked. He could have easily hired a singer to cover the spots but instead, he showed respect for his guest vocalists and I truly appreciated that. Pitbull danced his was through his set with a sense of power and ferocity. Whether you’re a fan of him or not, seeing him live is definitely an experience. Do I think he’s the most talented rapper out there? No. But the way he sings and performs with a sense of conviction is something that I admire and a reason that he is one of my guilty pleasures.

Most performers that are playing giant arena shows like the one last night end with their hit song. I mean, it only makes sense. Pitbull did something I had never seen a giant superstar do before. Instead of playing his sit song and disappearing from the stage, he and his band played the song and then waited for the packed house to quiet down a little bit. That’s when Pitbull started thanking his dancers, his backing band, and every single person that helped set up this true production of a show. He disappeared from view after saying his thank yous and I was left with a whole new appreciation of Mr. 305. He came off as a human, not a superstar, and he had a personality that shined throughout his set. Yeah, I was in love.

After a staggering forty minutes, the stage was set for Enrique Iglesias. You could feel the anticipation in the air and majority of the crowd could be find dancing their way to the music coming from the DJ that stood on stage throughout the longer than normal changeover. As the lights went down, the mostly female audience started screeching. When Enrique was spotted on stage, I thought that the ladies around me were all going to pass. The sound was deafening but, as soon as Enrique raised the microphone to his mouth, the screeching seemed to subside a little bit.

Okay, complete transparency, I haven’t thought about Enrique since I was a pre-teen. His music was never my favorite but, of course, I would sing along to his hit songs that were played on MTV (when MTV had music) and were played on the radio. That being said, this opportunity to see him from such a good set was something I was going to take full advantage of and, every song that I remembered from back in the day was instantly being sung at the top of my lungs. I was shocked that I still remembered the lyrics of his songs that I hadn’t heard in years but somehow they all came rushing back to me.

Enrique’s set was complete with a moving walkway that jutted out from the stage giving him the perfect opportunity to crouch down and give the crowd up front a perfect photo op. His set seemed to be perfect for photo ops as he ran aimlessly across the stage (in a very awkward way but it worked) and then even jumped into the crowd a couple of times (even climbing the bleachers at one point to get closer to some die hard fans). I loved the fact that he wasn’t afraid to get so close to his fans. I mean, Enrique is a thing, he’s a big deal, yet here he was shaking hands and letting women rub his abs throughout the set. Much like Pitbull, I found a whole new respect for Enrique Iglesias after seeing him live.

Even with the respect that I had found for Enrique, there was no denying that Pitbull had completely stolen the night and I was honestly a bit disappointed that he hadn’t headlined the show. Pitbull just has the music and energy that a headliner should have and that’s just not Enrique’s style. Had Pitbull closed out the show, last night would have been an absolutely perfect show.

If you know me, I have a lot of guilty pleasure including my inexplicable Bieber Fever. As if that wasn’t embarrassing enough, let’s go ahead and add an apparent attraction to Pitbull. Whatever, judge away, take my metalhead card away– but, if you were at the show last night, you would probably agree with me.