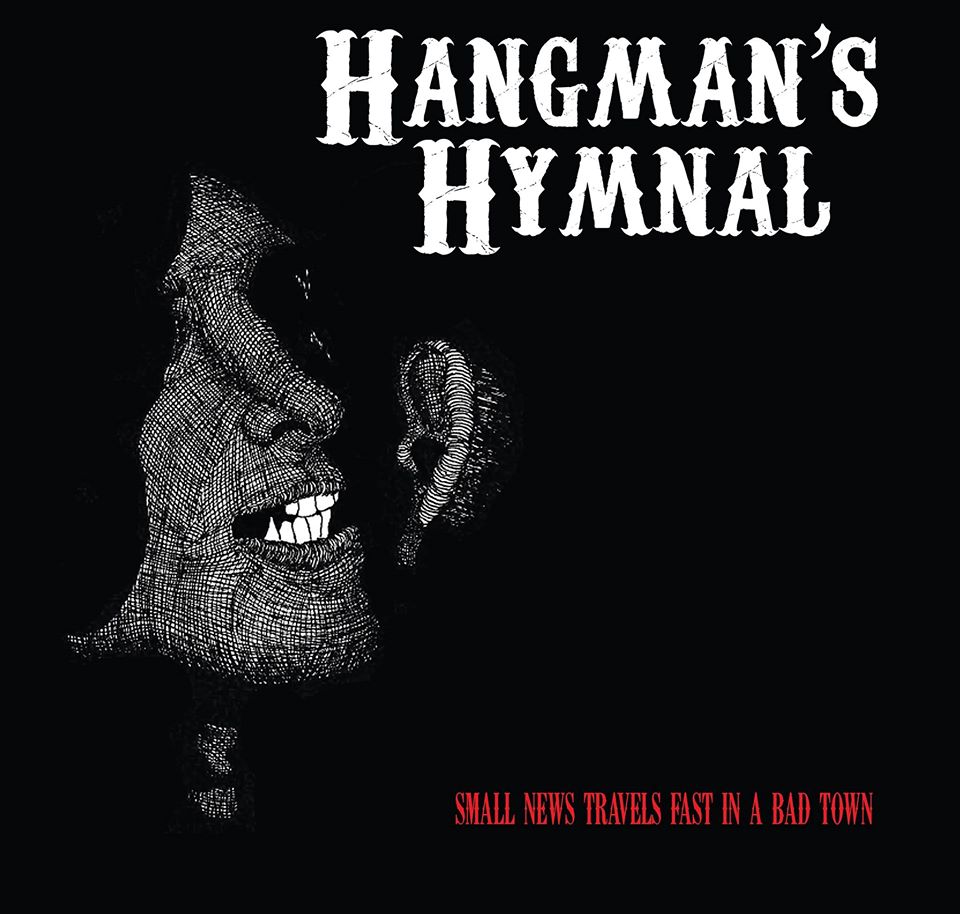 I found out last night that the “flowers” in front of my house are actually weeds. I told myself that I would wake up early this morning and take care of that and plant something that wasn’t just weeds but a mixture of a hangover and the fact that it’s ridiculously and painfully hot outside means I’m stuck inside just admiring my weeds. It also means that I have plenty of time to review a couple of albums so I reached into my magic box of albums to review and pulled out ‘Small News Travels Fast In A Bad Town’ by Hangman’s Hymnal.

The album kicks off with a triumphant drum solo on “The Sisters Brothers” before strumming guitars join in. As the song kicks in, the calming and triumphant sound is replaced by something a bit busier and almost chaotic but not out of control. I was instantly given strong Amigo the Devil, Devil Makes Three vibes. The old timey saloon feel I was getting from this track was strong and also perfect for a Saturday spent inside. It drew me in with ease and I was excited as the needle moved forward to “Delirium” (yes, album, because I’m old school like that and really think that it gave this album a special something).

“Delirium” slows things down and gives the fiddle the spotlight at the beginning. The slow and steady beat seems to be a stark contrast from the almost chaotic beat of “The Sisters Brothers” but it’s done so well and still has an old timey vibe that it works perfectly and I can already tell what kind of band Hangman’s Hymnal is. Just when I got comfortable with the slow and steady pace, the tempo kicks up to something that can only be described as a good old fashioned hootenanny. My mind wandered to a Hangman’s Hymnal show as the track played through. I could see the players on stage just playing their hearts out while the audience pushed and shoved their way into a sweaty mess. What I’m trying to say is I instantly felt an urge to see these guys live and truly hope that happens when things get a bit closer to a new normal.

Drama is what you get from “Waiting Around To Die”. The beginning of this track is just pure dramatic in the best way possible. Notes are dragged out before the hootenanny kicks in again. This track was instantly a favorite of mine and I found myself involuntarily tapping my toe to the infectious beat. You can feel the intensity grow in this song but it never really comes to a climax which had me taken a back a little bit but also had me swooning over the songwriting skills of this group. Just when you think you know what you’re going to get, they change the expected and give you something a bit shocking but still perfect.

There’s something moody yet beautiful about “Sorry, Mama”, the next track to take over my living room. It never really picks up tempo-wise like the other tracks have done but the way it cleanses your palette before having to turn the album over for the other side is perfect timing. Although I will remember this band for their hootenanny vibes, “Sorry, Mama” was a good example of how this band can change their mood and styling while staying very true to their sound. As the song faded out and I flipped the album over, I couldn’t help but get excited to see what the other side of this LP would bring.

Side B kicks off with “Back Alley Russian Hospital”. With no lyrics in the liner notes for this one, I was excited to see what it would be about because of the title. I was a little surprised as a trumpet kicked off the song as I hadn’t heard any horns on the first side but then I realized that the trumpet was probably there all along, I just never caught it. Regardless, the trumpet brought back the triumphant feeling I got when I started this album and it seemed to come full circle. It wasn’t until about half way through that I realized this song has no lyrics. Typically I’m not one for instrumental tracks since I am, after all, a lyrics lady but the intricasy of the instrumentation on “Back Alley Russian Hospital” had me intrigued and completely sucked in.

As “Back Alley Russian Hospital” fades out, “The Abyss” takes over my ears with an almost militant intro before taking a jazzy turn and creating a sound that made it impossible to just sit still. There’s a stunning a cappella part in this track that I couldn’t help but listen to a couple of times before moving on with the album. With just the vocals and a steady kick drum, this was a moment that was perfectly placed and perfectly crafted to really make the listener stop and be like “Whoa!” and that’s exactly what I did a couple of times.

Second to last on this album is “What You’ve Done” which has my favorite beginning of all of the songs on this album. It kicks off with that broken down carnival sound that I’ve always just loved. An old broken down keyboard sound kicks things off before the vocals come in and emphasis the almost darkness that that key part brings. Although it still has an old-timey sound to it, this track brings something a bit more modern in a strange way. I can’t quite put my finger on it but it’s almost like you are hearing the band evolve in this song and it’s a beautiful moment.

“Yellow King” closes out this brilliant album with a sense of drama and resolve. Started off by a dramatic piano part that quickly turns into an infectious beat, I realized that this album was going to go out on a bang and that had me excited. You get a sense of the chaos that played out on the opening track which makes you want to go back to the beginning and listen to this album all over again. The swells in this song are beautiful and something that I wish I had more of throughout the album. Although the passion is felt throughout ‘Small News Travels Fast In A Bad Town’, there’s something about the passion conveyed in “Yellow King” that I couldn’t get over. The way the song stops ridiculously suddenly was shocking but, again, another reason why I felt compelled to go back and start the journey of this album all over again.

I probably won’t get to weeding out front of my house today. I think I’ll be a bit too busy digging to Hangman’s Hymnal a bit more and losing myself in the daydream of catching this extraordinary band live.

My Favorite Track(s): “Waiting Around to Die”; “What You’ve Done”

What My Cats Thought Of It: Artie laid near the stairs to the basement; Autumn was yelling at a bird outside my window

How Badly I Want To See This Performed Live: 9.8out of 10

Look at some other amazing releases from Snappy Little Numbers HERE!