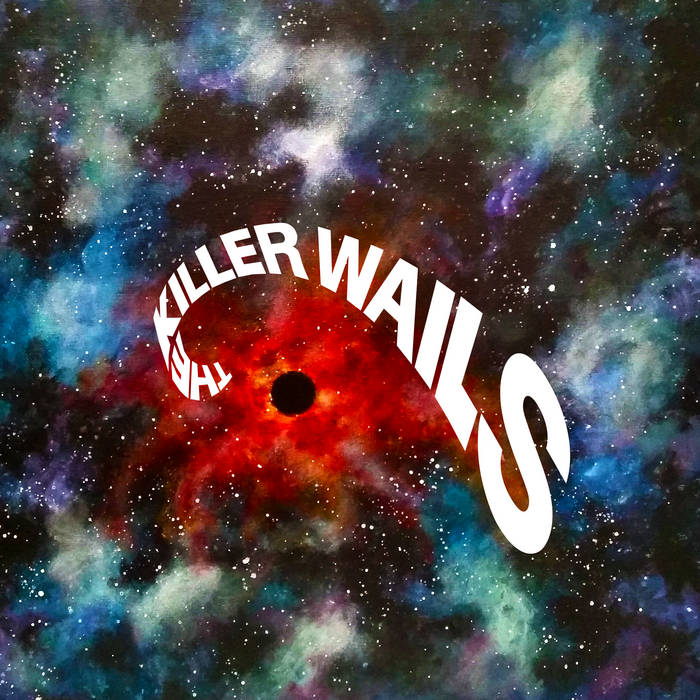 It snowed yesterday. Not just a dusting– we got inches of snow. It’s not that I don’t love it, because I absolutely do. It’s more that I wasn’t ready for the reality that winter is here. Between that realization and the realization that it has been months since my last real concert and will probably be more months until my next, my mental health is taking a dive and I can’t let that happen. Not now. Everything is really okay with my life. Just like everyone else– I’m figuring this new normal out. That being said, I can feel myself slipping and I have always used new music as a way to prevent myself from falling so I eyeballed my always-growing list of music to review and blindly selected The Killer Wails’ self-titled album. With no expectations and no clue what to expect, I hit play on the album and let it save me from myself.

The opening track “Eternal Busboy” may be less than two minutes long but it definitely set the scene for this band. Garage punk took over my house and warmed my soul. The tempo was slower than most of the punk music I lean towards but I loved it. There’s no shortage of energy in this quick opening track and, before I knew it, “Bath Bomb” had replaced “Eternal Busboy”. An infectious bassline kicks this track off before the vocals come in. Honestly, the lyrics to this track are a little comical. It truly seems to be about taking a bath and using a bath bomb. Although the lyrics made it hard to take this song seriously, the overall vibe of the song keeps it from coming off like a complete joke.

“The Hunter” has a fairly long intro compared to the previous two tracks and has a completely different vibe. This track feels creepy and filthy. What do I mean about this? I mean that I could hear it being played at a Halloween party and it sets the scene perfectly but I could also hear it being played at a sweaty dive bar as people dance along to the almost blues-drenched sound. Although a punk band, The Killer Wails prove their creativity with this track.

That almost bluesy-driven rock continues as the album moves on to “Human Error” which was an instant favorite of mine. This song it catchy, fun, and just great. It really puts a smile on your face regardless of what’s going on in your life. I definitely had a couple of listens to this song before moving onto the longest track on this album, “George Washington”. At just a second over six minutes, I was intrigued to hear how this band could pull off such a long track with such a classic punk sound. I was surprised as the track played through all the while giving me old school Elvis vibes. There are moments of this song that remind me of old school Rooney but other moments where there’s really no band to compare this to. Although it takes a little bit, there are moments of punk chaos that remind you that this is The Killer Wails. At other points in the song though, it’s hard to remember that and I love that fact. The Killer Wails have a sound and they do it well, but they also have a unique blend in their music that allows them to do tracks like this.

Things amp back into the punk-scene with “Halloween VI”. It’s punk rock straight out of your garage and it’s perfect. It was just what I needed tonight but it was “Threshold” that really caught my ear. There’s something a bit more polished about this track compared to the others while still maintaining that garage-rock sound that The Killer Wails does so well. The beat is still fairly slow and steady like the previous songs but there’s something a bit more powerful about it for this song. Just over a minute into this track, the band has a minor freak out that bridges into chaotic but never quite gets there. It was a perfect balance and something that I wish I had heard more of on previous tracks and hope to hear more of in the three remaining tracks.

“Dinosaurs” brings the sound back to that almost retro-garage rock sound of “Geroge Washington” but with a little bit more edge to it. Unfortunately, this track didn’t give me that punk freak out that I wanted, but that didn’t stop me from bopping around to the fun beat of this track. That punk sound I was looking for did come back for “Explode”. The transition between “Dinosaurs” and “Explode” seems a little extreme but I’m catching onto the fact that that’s just how this band works. Although they clearly like to have fun with their music, they do have the talent and that talent is constantly switching lanes between genres. Some people may find this to be a bit annoying but I love the always-revolving genre door that The Killer Wails have put themselves into.

Closing out this ten-song album is “Grandpa’s ’57”. This track brought back the old-school vibes heard through a couple of the previous tracks and, although I was really hoping for another fast and loud punk track on this album, I loved the way that this song acts as a perfect closer to the album. The way it just fades out into darkness is perfect and leaves you wondering what else this band could do if given another album.

Things are hard for all of us and the winter season seems to have crept up sooner than expected. This means even shorter days and that forsaken seasonal depression. Don’t let yourself fall into a hole. Find some new music and check it out. I promise it will keep you from falling and will probably even give you a sense of optimism for the future– or at least put a smile on your face.

What My Cats Thought Of It: Autumn laid on the back of the couch; Artie laid on the stairs

Check Out The Killer Wails Here:

Check out ‘The Killer Wails’ HERE!