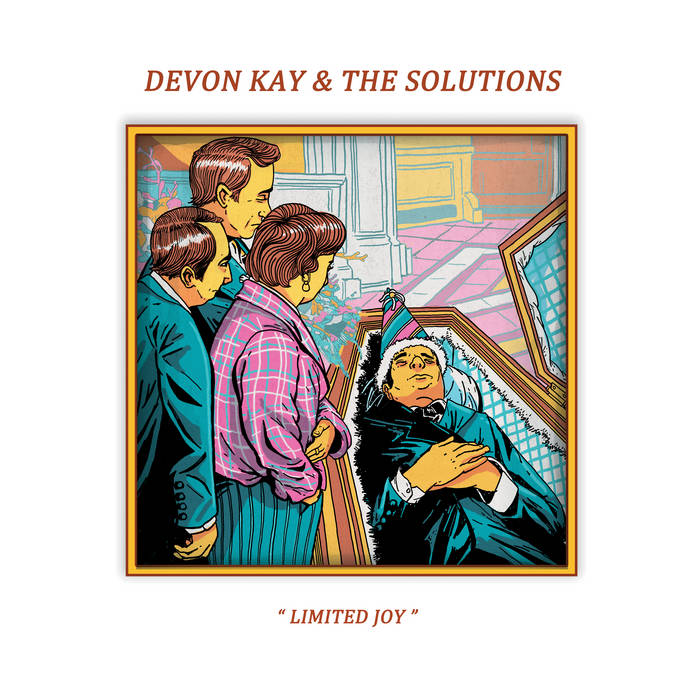 I know I’m super late to the party that is Devon Kay & The Solutions’ ‘Limited Joy’ album. The amount of submissions I have been getting lately is ridiculous (not a complaint- I’m completely flattered, to be honest) and I feel like I just can’t keep up. As I always mention, I review albums based on what speaks to me, and, for some reason, this album just hasn’t spoken to me– until now. I don’t know why this one stood out to me today but who am I to question? So, only a few months late- here’s my hot takes on Devon Kay & The Solutions’ August 2020 release, ‘Limited Joy’.

“Oh Glorious Nothing” is the first track on this quick and punchy eleven-song album and I was instantly in love. Full of energy, fun, and just what I needed on this sub-zero Monday night. The infectious beat instantly had me moving around in my chair like an idiot and the horns heard in the background had a smile stretching from ear to ear. The vocals are very Jeff Rosenstock whereas the instrumentation is very Less Than Jake and there’s a bow of Dillinger Four to wrap it all up. Yeah, pretty diverse as far as the influences I hear but, and I can not stress this enough, Devon Kay & The Solutions seem to take the best elements from so many amazing bands and styles, and create them into a sound all of their own. This is only the first track and I’m already so madly and deeply in love with this band.

A southern California ska meets pop-punk vibe takes over for “Anything At All” and I was instantly reminded of Goldfinger. Although the tempo slows a little bit for this one compared to “Oh Glorious Nothing”, I feel like the drama in the horns and the emotion in the vocals is really amped up with rises and falls that instantly gave me goosebumps. Before I knew it, the abrupt ending of “Anything At All” gave way to “One Horse” which brought in a whole new style. The hurried pace in the previous tracks is replaced by something a bit more laid back just strengthing the southern California vibe I was getting from “Anything at All”. Even though it’s a more laid-back track, there’s no lack of energy in this song and my cats were starting to frantically find somewhere else to be because I think they knew it was just a matter of time before one of them became my dancing partner.

“Do you wanna stay here? In the flat and unforgiving cold?”. I mean, it’s literally -3 outside right now so to say those opening lyrics of “In A Prairie State” hit just right would be an understatement. There’s a midwest angst in this track that I could relate to making this song an instant favorite of mine. If you don’t know what I mean by midwest angst, well, you’re clearly not from the midwest but maybe you’ll hear it after listening to this track. As much as I loved the angst vibe and the more aggressive vocals, I also loved the upbeat poppiness of “Evermore”. Although this one wasn’t my favorite on the album, I get it, and I like that it shows a different side of this band that I had not heard in the previous tracks.

“His & Hearse” opens with a beefy intro that instantly draws you in before the vocals come in with a sound that only Devon Kay & The Solutions could bring. That deeper sound heard in the intro comes in and out throughout this track and I honestly found myself holding my breath for the next moment it would come. Sadly, the tracks on this album are super short (this track lasting under three minutes) and, before I knew it, “252 Brighton Ave” had taken over my speakers with its triumphant energy. I feel like this is one of the few tracks that I found myself really paying attention to the lyrics. Yes, I know, I’m a lyrics lady, I say it all of the time but, when up against a stellar horn section, well, the horns will win. That being said, I think I finally realized that the lyrical content on this album, although not the main focus, is absolutely brilliant. Simple, but brilliant.

Speaking of lyrics, the lyrics of “Keep Dreamin'” made this an instant favorite. I’m thinking this is where the title of the album came from as one of the lyrics is “Accept that you have limited joy” and honestly, it makes sense why they would make this track the “title track”. It’s full of power and a little bit of everything heard in the previous tracks making it the perfect showcase of just what this band can offer. Unfortunately, it’s also the shortest song on the album, and just when I was about to attempt to sing along, the song was done.

“Risk/Reward” really stood out to me on this album. There’s almost something a little country and hollow about this track making it feel almost acoustic (or as acoustic as Devon Kay & The Solutions will ever be). It has more of the laidback feeling of “One Horse” but still is nothing like that track just proving the versatility of this band. That laidback feeling turns into something a little mundane for “My Neck Is Tired From Holding My Head Up” but it’s not boring. I guess mundane isn’t the best word choice for this one but it’s all I got right now. Just like the title suggests, you get something like exhaustion from the way vocals are portrayed in the verses of this song and I really loved how it helped convey the lyrics in the perfect way.

“Les Talk, Less Rock” ends this quick eleven-song album with a sense of vengeance and a track that I just could not get enough of. It’s an anthemic song with a sense of power that just seems to act as a perfect exclamation point to an amazing album. Honestly, I have nothing left to say other than just wow.

Again, I know I’m late to the party on this album and I have no one to blame but myself. That being said, I’m now at this party and I don’t think I ever want to leave! What a great album through and through.

For Fans Of: Energy; Horns; Smiling

What My Cats Thought Of It: Both cats hid upstairs so they wouldn’t have to dance with me

How Badly I Want To See This Performed Live: 10 out of 10