Gonna Be A Riot in The Streets Tonight 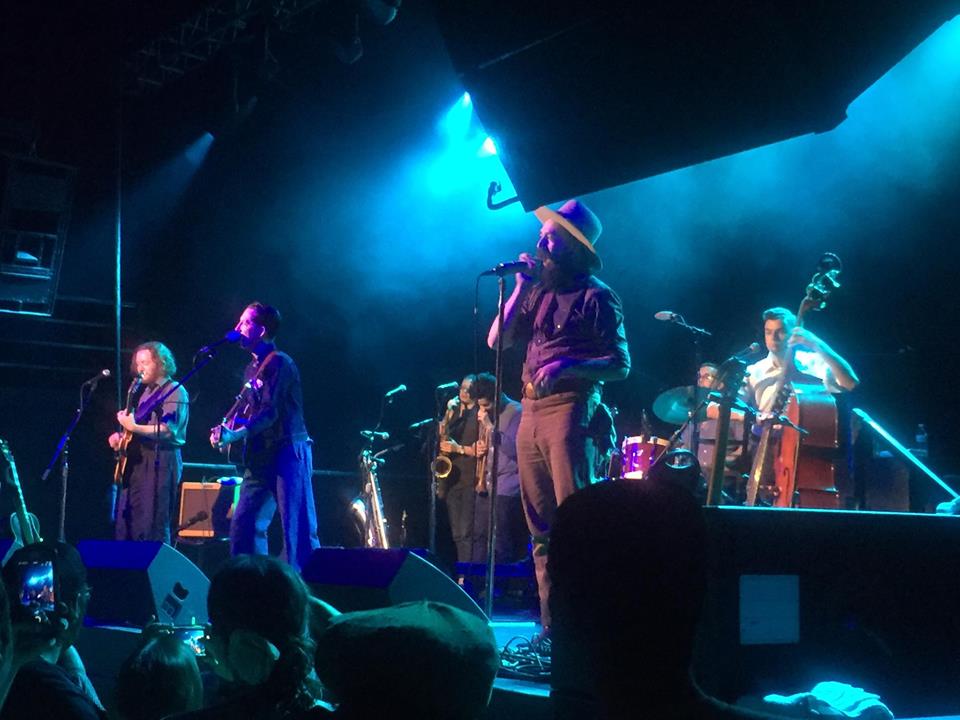 There are some people in this world that were clearly meant to live in a different time, a different era. Pokey LaFarge is one of those people. He seems to be from a much simpler time when manners were a necessity and passion meant everything. Being able to see someone like this perform has the power of taking you back to that simpler time and it’s truly more of an experience than just a concert.

The show started out with the beautifully talented Lillie Mae. Me saying that Jack White (of The White Stripes and his own entrepreneurial fame) worked with Lillie on producing her music should say it all. This woman is a freaking powerhouse. Her voice, although powerful, has a truly beautiful country twang to it that would make anyone jealous. Her beauty came through loud and clear as she seemed to sing with her heart on her sleeve. There was an undeniable sense of passion that radiated off the stage but she was still able to crack a smile every couple of seconds at the growing crowd that was cheering her on.

Lillie Mae’s music is much more country than I would ever listen to if I’m being honest. There were slow ballad-like songs that, if anyone else had been singing it, I would have tuned out or headed towards the bar for a drink but something about Lillie Mae had me stuck where I was with my eyes on the stage and my ears open. Her music ranged from honky-tonk to songs with an almost Broadway feel to them. Her voice seemed to change a little bit with every song but it was still easy to feel a common thread throughout the set. The band behind Lillie Mae was obviously super talented but they really seemed to take a backseat to the sheer power in Lillie’s voice. Whether you’re a fan of country music or not, Lillie Mae is worth a listen. There is absolutely no way you can listen to her and not be impressed or watch her and not smile.

With only two acts on the bill for the night, and with how impressed I was with Lillie Mae, I was excited to see what headliner Pokey LaFarge would be like.

Pokey (born Andrew Heissler) took the stage with a very calm demeanor. There was nothing flashy about the way he and his band took the stage but as soon as he started singing, the crowd went silent and seemed to inch closer to the stage. Much like Lillie Mae, there was an undeniable sense of power that came out when Pokey opened his mouth but there was still a sensitive side to the music that was enough to move mountains.

Pokey’s music is unlike anything I’ve really heard. It has a very old timey sound to it but somehow it still feels modern and fresh. It’s a fresh take on a classic genre of music that seems to have been either forgotten or completely redesigned into something new and that has Pokey making waves right now. I love being able to see a performer who clearly does not care what else is going on in the mainstream world right now. The fact that Pokey performs music that he seems to truly enjoy is just one of his many selling points. That passion and conviction can change the whole dynamic of a concert and make someone who doesn’t typically listen to a particular type of music into a fan falling head over heels in love with a band.

The music seemed to truly transport the crowd to a different place. Everyone was twisting and moving to the music in a very old fashioned way. I spotted Lillie Mae and some of her bandmates practicing their swing dancing near the stage and couldn’t help but smile. I may have been at the show alone last night but that didn’t stop me from dancing a little bit. Within the first song I found myself doing more than just my usual toe tap and head nod, I was literally moving my entire body. I don’t even think I noticed I was doing it until the first song ended and it was time to clap. Watching an artist perform that I knew very little about prior to show and wanting to dance as much as I did (I don’t dance. At. All.) told me everything I needed to know about my feelings towards Pokey LaFarge.

With eight studio albums out, Pokey is not a stranger to the spotlight but he still seemed extremely humbled by the crowd that had taken time out of their Thursday to come see him perform. He had this very down to earth feel about him that somehow matched the music he was putting out there. The humbleness and pure passion that was felt throughout First Avenue was not an unfamiliar feeling for me but it’s always makes me excited to be where I am watching who I’m watching.

Pokey doesn’t belong in this era. He is a young kid with an old soul and too much talent to handle. Seeing that passion and the love he and his amazing band put into their performance made me feel like I was attending a concert back in the 40’s or 50’s. When a concert makes you truly feel like you’ve traveled back in time– well, that’s no longer a concert, that’s an experience.