This Lucky Penny’s Been Nothing But Bad Luck 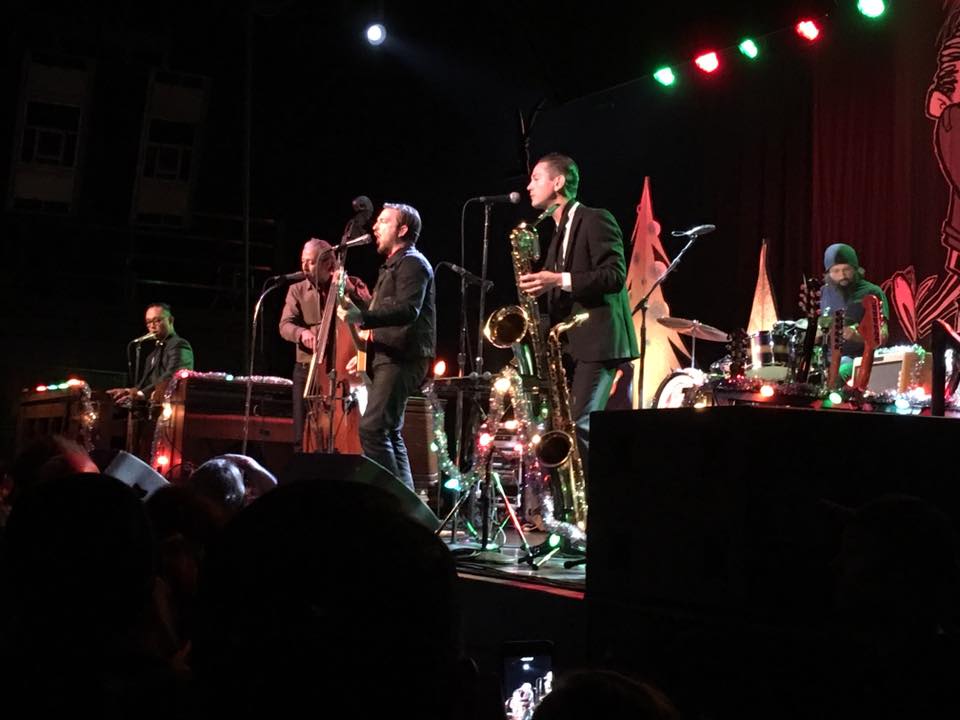 Riot Fest is the one festival every year where I just go. I don’t take notes, I don’t take [many] pictures. I just get to go and be a normal person who doesn’t have to voice their opinion after every show. That being said, I can’t help but listen for things that I may want to cover in the future. That’s how I, a Jew, found myself at the JD McPherson Christmas show last night. His voice and his vibe caught me as I was wandering around Riot Fest and landed his name on my list of musicians I have to catch outside of the festival circuit.

Kicking the night off was Eddie Angel’s Guitar Party. I was intrigued by this opener before they even took the stage. The images online for the show all portrayed frontman Eddie Angel wearing a luchador mask. I can’t tell you why (maybe it’s my love for amateur wrestling) but I was instantly excited by just this image. I wasn’t let down and a little bit after 8PM I watched as Eddie Angel (complete with his luchador mask) and three men in red shirts and Santa hats took the stage. The group wasted no time and jumped into an almost surf-punk rockabilly styled Christmas tune that even had this Jew getting into the Christmas spirit.

Eddie Angel’s short set was full of amazing guitar playing from not only Eddie himself but also his guitarist. Like usual, I was too into the music to take note of his name so my apologies to him but I could not publish this post without mentioning this kid (and I mean kid). He looked young when he took the stage but as I watched him play through the set I assumed he was just a baby faced thirty-something with great skin. It wasn’t until Eddie introduced him as a seventeen year old about to wrap up high school where it all really set in. This was literally a kid and he was outshining the great Eddie Angel (who is also in Los Straitjackets) at times with his superb guitar skills. Obviously all four of the men on stage were spectacular and I could have spent all night watching them all but that 17 year old guitarist had me absolutely hooked.

After a quick set changeover, the screen concealing the stage rolled into the ceiling and unveiled a stage with cardboard tree cutouts and Christmas lights. The stage was crowded with instruments and band members but it was a comfy kind of crowded. Much like Eddie Angel’s Guitar Party, JD McPherson and his band wasted no time jumping into a set that combined old Christmas favorites with new Christmas favorites and even a couple of originals. Even though the set started with a bunch of Christmas songs, I was instantly reminded by I had added JD McPherson to my list. His voice was smooth and full of passion but also had this sense of energy that you don’t typically get from a softer voice like this. A little bluegrass mixed with some rockabilly and good old fashioned rock and roll, I honestly didn’t care what he was playing, I was just so captivated by his voice and his energy as a person that I couldn’t look away.

JD’s set was full of dance-a-long songs that the older audience took full advantage of. There was almost an old-timey vibe in the room. Some people were dressed to the nines for a night out on the town while others were sporting their best Christmas sweater. Regardless of what they were wearing, there was a smile on everyone’s face and a pep in everyone’s set. Although the audience was clearly charmed by the Christmas songs that JD and his band performed, the songs that got the most applause were his originals and for good reason. Thursday night’s show may not have been my typical cup of tea but I was definitely drinking it and loving every sip.

I was a bit worried when I walked into the Thursday night show due to it being a Christmas show. I’m not a Grinch in any way shape or form (no matter what my mother says) but I also don’t know many Christmas songs and with Channukah starting in just a couple of days, my mind has been on potato latkes and Manischewitz- fueled games of dreidel. I loved the fact that, although it was a Christmas show, both Eddie Angel and JD McPherson expanded on that and played so much more than just Christmas songs. Even when playing originals, there was a comfy warmth that took over First Avenue and all of it’s occupants. Honestly the only thing missing from the night was a non-stop flow of either hot chocolate or hot apple cider.

It’s crazy to think that December is just a day away. I’m sure there are many more holiday shows in the near future for me but I’m so glad that I kicked the season off with JD McPherson.

Average Age of the Crowd- 41