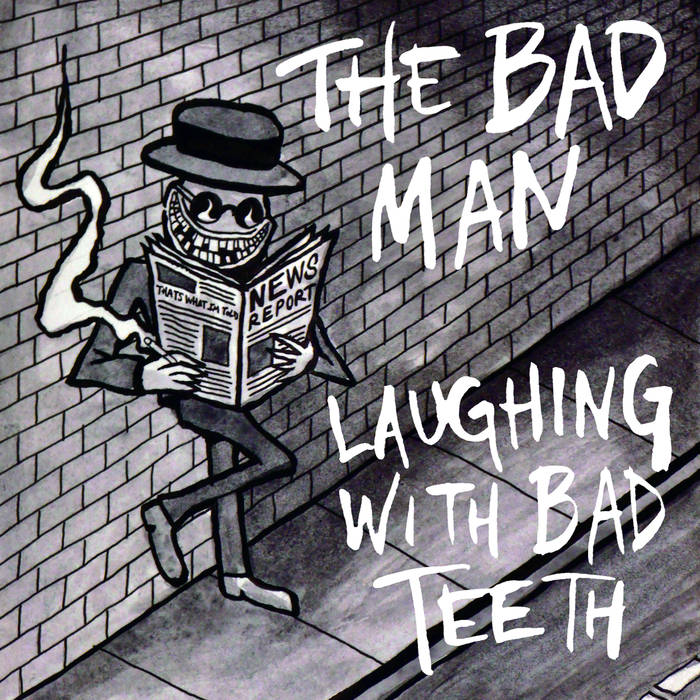 The Bad Man is one of those names that I feel like I’m constantly seeing on killer line-ups in town yet have never had a chance to catch live. Living in a city with so much amazing live music truly gets difficult especially if you’re a live music junkie like myself. Although I’ve never been able to catch The Bad Man live, I was able to snag a copy of The Bad Man’s album ‘Laughing With Bad Teeth’.

I was instantly intrigued as the album kicked off into “Babe Ruth”. An almost old timey instrumentation mixed with crusty almost folk punk vocals, I knew I was going to love absolutely everything about this album. Unique doesn’t even describe it. With lyrics that seem to welcome you into The Bad Man’s world and what’s to come with this album, I sat back and settled in for what was sure to be an adventure.

“Wally the Beer Man” was up next. Keeping with the ridiculously unique sound, this song definitely leans more to the crust punk side of things. Scratchy vocals and almost muffled sounding drums all mixed with the infectious beat that makes you want to move around at least a little bit even if you’re sitting at your desk makes for a dynamic song. Driving drums are the name of the game and it feels like as soon as this song starts, it’s fading into “Bonita”. With an emphasis on horns, “Bonita” seems to take that crust punk sound and expand it into an almost form of ska. The simple lyrics mostly in Spanish seem to take a backseat to the brilliant instrumentation including the impressive horn solos throughout the song.

The abrupt ending to “Bonita” is a bit of a shock but in no time the band shoots you into the next track, “Disco”. The ska vibe from “Bonita” is hidden back into the rest of the song while the namesake of this song somehow takes a front seat. Now, don’t get me wrong, this is definitely not a Bee Gees style disco song but, as you get used to The Bad Man’s weird (in a good way) style, this is as disco as it can get and honestly half way through this song I was craving  visit to a rollerskating rink and a trip to find flare jeans.

“Disco” is followed up by “Toad (So I’m Told)” which seems to knock things down a peg as if to give the listener a little break (which, trust me, is much needed). Although a bit slower than the previous songs, the vibe is still so distinctly The Bad Man’s. Just as you are getting back into a normal breathing pattern and being able to think straight, the band jumps into “Nik In Heels”. “Nik In Heels” does a good way of easing you back into the chaos that is this band but after the calmness of “Toad (So I’m Told)”, it’s still a bit of a shock. With lyrics about “yellow banannas”, I honestly couldn’t tell you what this song is about but the quirky lyrics match the quirky sound in the most perfect way so who am I to question it.

“Operation Exhaustion” brings back an almost ska feel while it doesn’t have the emphasis on horns like “Bonita”. It’s a song that transports you to a beach in California under the bright sun with a Corona in hand. Not quite sure how I got that image in my head but that’s exactly how this song makes me feel and I have no qualms about it.

“Charlie’s Triumphant Return” is definitely my favorite song on this album if only because of the line “The drag queen from Des Moines”. I mean, it’s rare that I get to hear my hometown called out in a song so let me have this one. This eighth track seems to focus on the story telling aspect of The Bad Man that you clearly hear throughout the rest of the album but this song seems to focus on it. Like the “yellow banannas”, I honestly couldn’t tell you what this song s about but, again, name drop my hometown and I’m in love with the song. “Detroit Score” is the same way– I have no clue what the song is about but I absolutely loved it. The jazzy styled horn intro is definitely a stand out moment on the album and I love the way that that jazzy styled horn stays in the forefront throughout this three minute song. Although the tempo is slower than some of the previous songs, there’s no lack of energy in both the vocals and instrumentation.

Almost done with the journey through this eleven song album, I thought I had heard it all. That’s when “Angels” started playing. Down and dirty rock n’ roll would be the best way to describe this song. Taking all of the elements that had been laid out previous in this album, “Angels” seems to be the blender that puts it all together. Any questions you had while listening to the rest of the album come to light during this song while the horns are blowing in your ear and the unfinished sounding vocals are screaming at your soul.

Closing out this brilliant album is “Chaz”. Bringing back an old school ska feel that is hidden throughout the rest of the release, “Chaz” is a very calm ending for such a unique and crazy album but also the best song to make you want to just keep listening to the album on repeat.

I fell in love with this album instantly. From the handwritten lyrics and little chicken scratch drawings in the liner notes to the unique sound and almost chaotic feeling of it all, The Bad Man’s “Laughing With Bad Teeth” was a true treat to be able to review. With so much music in my life, it’s rare that something hits me as hard as this album and this band has. You best believe that the next time I see The Bad Man on a local show line-up, I’m dropping everything to go see them.

Chances Of Getting A Noise Complaint While Listening To In An Apartment: 9.1 out of 10

What My Cats Thought Of It: Artemis laid by my computer; Autumn slept under my bed

How Badly I Want To See This Performed Live: 14 out of 10

Check Out The Bad Man Here: