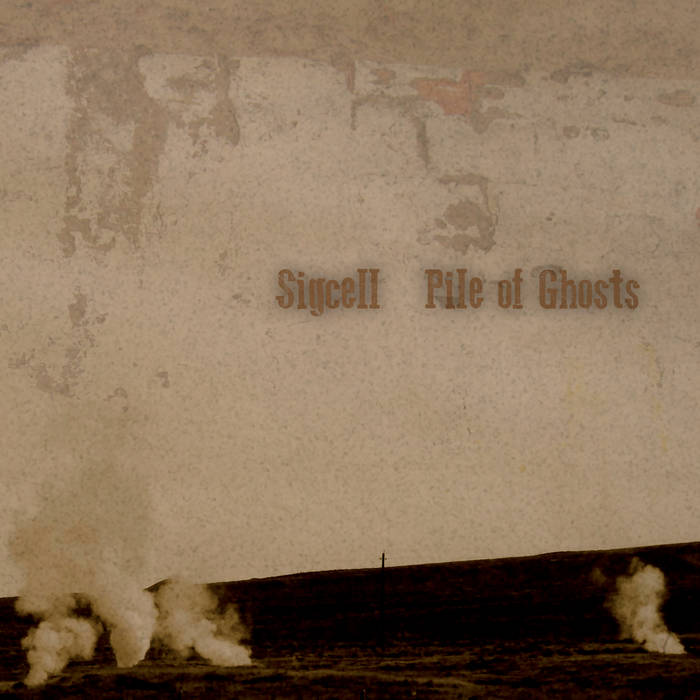 There’s not much to the presentation of Sigcell’s ‘Pile of Ghosts’. Just a sleeve encasing a CD all wrapped up in a plastic wrapper (which my cat really enjoyed chewing on), there’s not much to read or look at. The cover is mysterious. A dark image of what looks like a hillside with something that resembles a cross in the middle and then smoking plumes barreling up the side, the artwork didn’t give me any hints as to what to expect when putting this four song EP into my stereo. I hit play and braced myself for whatever was to come.

The quick EP starts with the title track “Pile of Ghosts”. Sparse and calming would be the best words to describe this opening song. There’s something ridiculously simple and soothing about it. Peter Wannemacher’s vocals are deep and the tone of his voice has some unrecognizable old soul vibe about it. There’s a sense of pain in the vocals and, as Sarah McCaffrey Ritchie’s vocals jump in, that pain is turned into something a little brighter while still having an undeniable sense of passion and calmness about it.

“Turning the Truth” is a beautiful number that I instantly fell in love with. The darkness in Peter’s voice turns to something brighter but the lyrics keep with the darkness laid out in “Pile of Ghosts”. There’s still something simple about the music. Everything feels very calm and laid back but there’s no lack of energy or driving force behind the song. The minimalist approach to the instrumentation is refreshing. Spending most of my time in the rock and metal world of things, I was already relaxed and just sitting back and sipping on my fourth cup of coffee as this song played through. “You didn’t sign on for this merry-go round and now the cards have turned against you.” There’s a painful beauty in those lyrics which makes “Turning the Truth” my favorite track on this four song EP.

An almost country vibe comes in front and center for “Circumstance”. From a slight twang in Peter’s voice to the quiet yet almost constant strumming of guitar, this song stands out from the previous two tracks while still being clearly a Sigcell song. Sarah McCaffrey Ritchie’s vocals get a much deserved highlight on this track. The way her voice matches but also almost rivals that of Peter’s is beautiful and the back and forth mixed with the voices combining throughout this song is absolutely stunning.

The fifteen minute EP ends with “This Time Around” which closes out the way the four tracks started. An almost haunted beauty behind the words and instrumentation, it’s clear that Sigcell is more than comfortable with keeping things simple while making sure that each word and every note has a purpose. Out of all of the songs on this EP, “This Time Around” seems to have the most waves of sound in it which makes it an exclamation point on an already stunning release.

Usually I try to hit around a thousand words for my reviews but Sigcell’s ‘Pile of Ghosts’ is one of those releases where I think the music itself does the talking for it. The beauty encompassed in this EP is something that my words will never be able to justice and, the quickness of it left me nearly lost for words. I didn’t know anything about Sigcell when popping this album into my stereo but now I can’t wait to see what else they have to offer.

My Favorite Track(s): “Turning The Truth”

Chances Of Getting A Noise Complaint While Listening To In An Apartment: 4.3 out of 10

For Fans Of: Calmness, One Too Many Cups Of Coffee, Setting The Tone For A Productive Day

What My Cats Thought Of It: Autumn tried to eat the plastic wrap; Artie slept on the floor under my desk