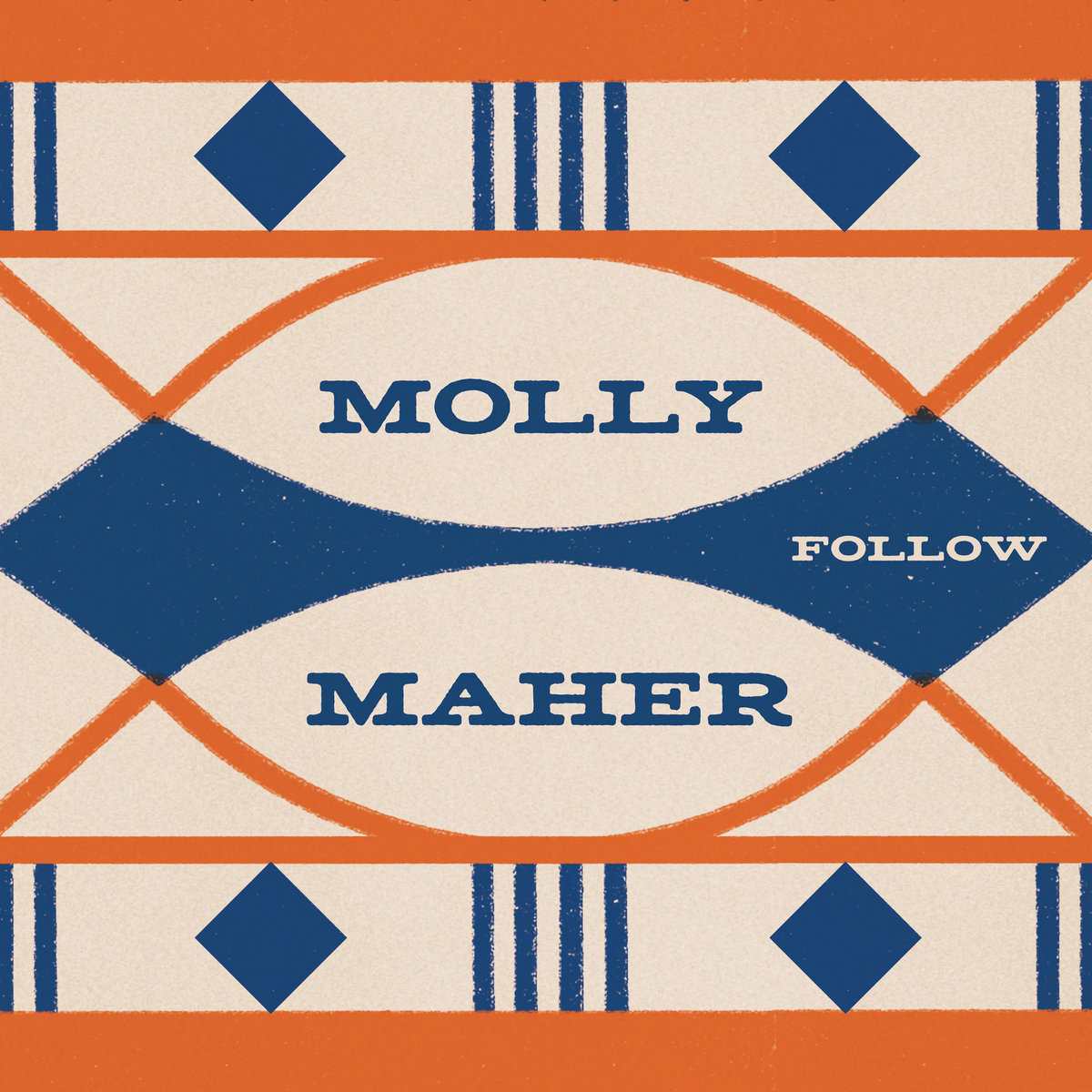 I’ve been fortunate enough to catch Molly Maher live a couple of times. I have always been struck by her charming personality and calming yet feel-good and comforting music. Even though I’ve always loved catching her live, I’ver never actively listened to her music outside of her live performances. It’s not that I didn’t want to, more that I just never really thought about it. She has been a strictly live performer for me but that changed tonight as I reached into my box of albums to review and pulled out her new album ‘ Follow’.

I was instantly intrigued as I hit play on the album and “Jango” started playing. I honestly would not have guessed that this was Molly when compared to what I remember from her live shows. Interesting rhythms with a laid back bass line and strong spanish and gypsy influences, this song absolutely drew me in. Not hearing Molly’s impeccable voice in this track was a bit strange but a glance at the liner notes told me everything I needed to know about this song. The music was written by Molly and that’s when this opening track made sense. I’ve always thought of Molly as versatile as far as her alt-country vibe that often leans towards the Americana side of things or even the indie-pop world. “Jango” was a perfect example of this versatility.

“Run Run Run” took over as soon as “Jango” ended and I instantly recognized the track as belonging to Molly. That distinctive alt-country meets Americana sound took over and instantly brought a smile to my face. Molly’s calming and comforting vocals came through loud and clear as the band behind her wailed without taking away any of the spotlight from the songstress. A bit old-timey with a Fleetwood Mac vibe that I just couldn’t shake, if this song doesn’t have you sitting you there with a smile on your face while swaying back and forth in the steady beat then I don’t know what to tell you.

Following “Run Run Run” is “Pale Face River” which takes the calming nature of “Run Run Run” and expands on it. A bit more somber and dark, there’s an undeniable sense of beauty to this heartbreaking track. It’s the kind of song that makes any thoughts clouding you mind at the moment disappear with ease. The pain in Molly’s voice is heard as clear as the beauty in her vocals. I’ve always been a bit of a sucker for slow and sad country songs and this one hit the spot. Just when I found myself drifting off with “Pale Face River”, “Open Road” took over and instantly gave me a sense of adventure. This song was light on the vocals but huge on the passion. The stomping drums with the clacking guitars over and a hodgepodge of other sounds created a complete soundscape that I never wanted to leave.

“Stormcloud” brought out the bluesy side of Molly that I’ve always enjoyed. This track is somehow minimalistic while still packing a huge punch. The beat is slow and steady and matching the lyrics in the most perfect way possible. “Bird Song (I’ll Follow You)” brings a brightness back to the album without coming out of left field. Still slow and steady, Molly’s voice shifts to something a bit more playful while staying distinct and very “Molly”. I love the lyrics of this song so much. They are ridiculously heavy when you really start to listen to them but, with the more cheerful tone of the instrumentation and the vocals, you are left with an uplifting track. This juxtaposition is genius, it’s catchy, it’s exactly what I wanted to hear from this amazing musician and her super talented backing musicians.

“Go Slow” is another track that, like “Jango”, kind of caught me off guard. There’s this super catchy almost Flamingo styling to it that makes it impossible to sit still while listening to. Thankfully nobody was over to witness my completely awkward dance moves as I sat in my chair at my desk. I truly dare you to listen to this almost completely instrumental track without moving along to the beat.

Almost to the end of the album but Molly still had plenty in store and the next track, “Someday Somebody”, was exactly what I needed. “Someday, somebody gunna figure you out…” I mean, those words hit me in the perfect spot and it was exactly what I needed after going through a recent breakup. This track gave me a sense of empowerment and confidence that I so badly needed right now. I can’t thank Molly and the rest of the musicians on this track enough for that. I also really needed “On the 18”, the next track to flood my house. A light and airy track with few vocals, “On the 18” was the perfect follow-up to “Someday Somebody” which had me all wrapped up in my feelings and in my head. Kind of like a palate cleanser, although I never wanted “Someday Somebody” to end, this track was what I didn’t know that I needed.

Closing out this quick forty minute album was “Find The Shepherd” which instantly transported me back to one of Molly’s shows. She was somehow able to convert that charming personality and calming, yet feel-good and comforting, vibe into a song. It was as if this closing track brought the album back full circle for me.

I don’t know why I never took the time to listen to Molly Maher’s music outside of seeing her perform live but I now know that was a huge mistake. Molly is a true bright spot in the Twin Cities music scene. She knows what she is doing, has a unique and distinct sound, and has an energy that knows no boundaries. I absolutely suggest ‘Follow’ if you ever find yourself at home on a random night with no plans and no real idea of what to do. This album will either help you clear your head out or help you get lost in your own head. Regardless, this album deserves your attention.

For Fans Of: Calmness; Slow, Sad Country Songs; Music that completely takes over your body and soul

What My Cats Thought Of It: Both cats were probably hiding upstairs due to an impending thunderstorm