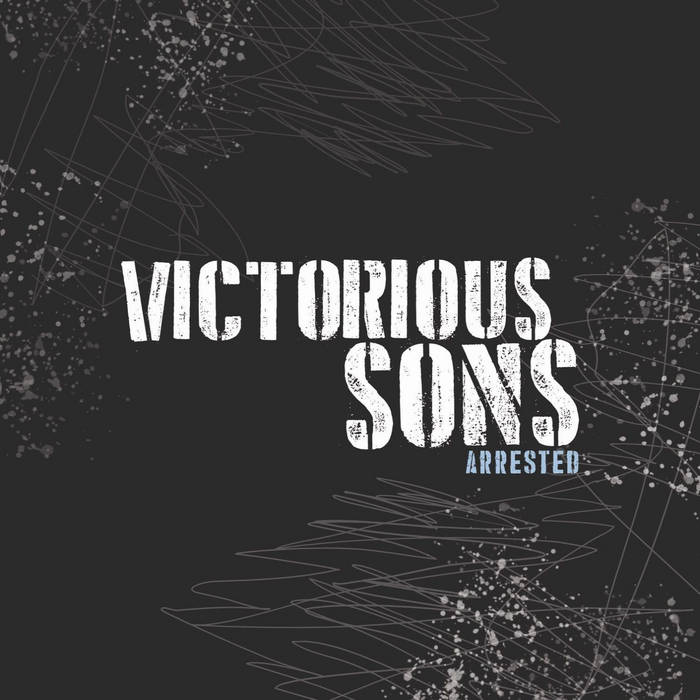 I recently got hooked up with a website that sends me about a million singles a day to check out. Okay, maybe the million number is a bit of an exaggeration but it’s a lot. There have been a few great singles and a few not so great singles that I’ve had the pleasure of checking out and “Lost and Found” by Victorious Sons was one of the ones that really stood out to me. It stood out to the point where I asked to cover more than just that one track from them. So, here I am, a bit nervous, but oh so excited to check out their December 2020 EP, ‘Arrested’.

As soon as “Out of Control” hit my speakers, I remembered why this band caught me so quickly. The blues-infused, almost southern rock, tone of the guitar challenges the heavier vocal styling in the best way possible. This opening track really lays out what this band is all about and, although it’s a bit more mainstream rock than I typically like, there’s just something about it that I can’t quite put my finger on. It’s anthemic but every note and word is full of a fiery passion that you can feel in your soul.

I’ll admit, I knew very little about this band other than the one single I heard previously and now, that opening track, but I was a little surprised as the tempo slowed down for “Ecuador”. I’m not going to say that I was disappointed, more just a shock and I don’t think the tenderness of “Ecuador” is quite what I wanted on this Monday night where I was struggling to stay awake. Regardless, much like “Out of Control” but on the other side of the coin, the passion is felt throughout this second ballad-like track. Thankfully, that emotional tenderness that the band does so well but just didn’t fit my mood tonight, fell to the wayside for “A Little Lie”. The beginning part of this song is instrumental and really gives you a little insight into all of the influences that can be heard throughout this EP. A little southern rock, a little bluesy, a lot of power, and a little hint of something a bit heavier- just pure magic. Even when the vocals came in, I still found myself captivated by the numerous influences I could hear in this track.

There’s this odd Eddie Vedder influence in the vocals of “Keep You Alive” that I just could not seem to shake. Again, not my typical sound (I’ll admit, I’m not a huge Pearl Jam fan) but there’s something about the way that Victorious Sons does it that keeps me in the palm of their hand throughout all of their tracks. Even when things slow down again for “On Your Way”, I found myself just completely enthralled in the music. “On Your Way” is about five and a half minutes long making it the longest track on this six-song EP. Again, much like “Ecuador”, I wasn’t much in the mood for a track like this but I just could not stop listening to it and, before I knew it, the familiar sound of “Lost and Found” was taking over my house.

My introduction to this band was their track “Lost and Found” and that love I felt for the band upon my first listen came flooding back as the track pumped through my house at a deafening volume. It’s a little Finger Eleven, a little 80’s glam metal, a little southern swagger- the list continues to go on and on with this band. This is definitely a standout track on this EP for me. It just brings something a little more upbeat and more unique to the sound of these guys. That’s not to say that the rest of the tracks are bad because they aren’t but listening to this track reminded me why this band stuck out to me so much more than the other tracks did.

Victorious Sons definitely isn’t my normal cup of tea and, although the rest of the tracks on this album are good, they just don’t compare to the unique vibe of “Lost and Found”. I highly suggest you check out all of the songs from these guys but if you’re not like me and don’t find the joy in taking multi-song journeys with unknown bands and a sense of optimism, at least listen to “Lost and Found”. Seriously.

My Favorite Track(s): “Lost And Found”

For Fans Of: A Southern Swagger; Anthemic Power

What My Cats Thought Of It: Both cats slept upstairs