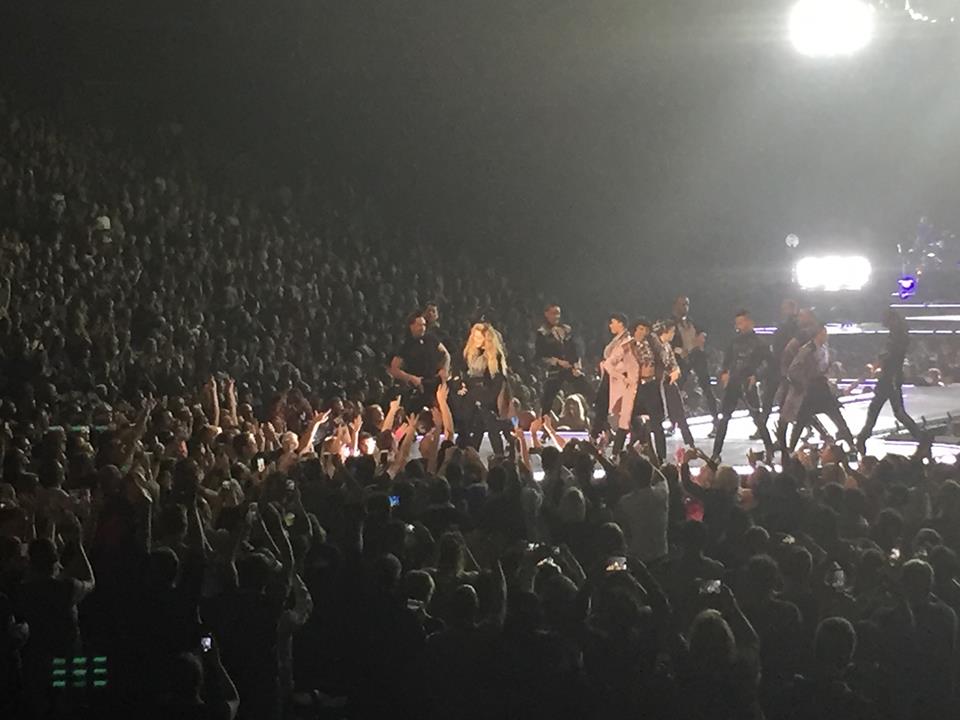 I’m not naive. I know that the majority of the pop stars these days don’t sing live. I know that they focus more on the performance than the talent. That’s fine and dandy. I get it and it’s not that I hate it, but I would rather go to a show where I see people actually sing and play. That being said, when my friend, Chad, offered me a ticket to see Madonna last night, I couldn’t resist.

I couldn’t name more than probably three Madonna songs. Yes, I get it, she’s the “queen of pop” but growing up, I wasn’t really a pop type of a girl. Sure, I went to see Christina Aguilera, and yeah, I used to roleplay like I was in the Spice Girls (obviously I was Scary Spice.. she was the edgey one) but I am lucky enough to have a father that tried to open my eyes to everything and exposed me to more music than just the top 40 that was played on the radio.

All of that being said, I absolutely fell in love with everything Madonna did last night. It wasn’t just because the show was spectacular (it truly was), but it was because Madonna was real. She was actually singing. There was not much lip syncing except for where it was necessary. She had some flat notes, some sharp, usually she was right on key, but good for her for being real. She was actually playing the guitar (when she had a guitar in hand). Although the riffs seemed to be super simple, at least she was being real and really playing.

I’ve seen Lady Gaga before. Hell, I sat through a whole Miley Cyrus concert. They were both great entertainers, but they were not real. Not only was Madonna a true entertainer last night… she was also real. I was never a huge Madonna fan. I knew some of her songs but that’s it. I went last night as more of a bucket list type of thing. I mean, don’t you want to be able to say you saw Madonna live? That was one of the best decisions I have ever made…

Madonna was everything last night. The show started out with the dancers wearing outfits that looked like they were straight out of Mulan (you remember that Disney movie don’t you?). The mood was dark and ominous and then, from the ceiling, came a spiked cage with Madonna inside of it. From the second she stepped out of the cage, to the second she stepped off the stage, she had me mesmerized.

Her fourth song Holy Water just proved to the crowd that, “Bitch, I’m Madonna”. (That was the second song she played and a hit with the crowd.) During Holy Water her dancers were using metal crosses as nothing short of stripper poles. Yeah, that’s super controversial and I’m sure offensive to extremely religious people but, you’re at a Madonna concert… you kind of signed up for stuff like that!

Holy Water seamlessly turned into Vogue  which, obviously, got the crowd hooting and hollering. Madonna didn’t seem to hold back even though she admitted to waking up with a fever. Her voice, although you could tell she wasn’t feeling 100%, stayed true to her style and her past which made the song sound exactly like it would have had you seen her back in 1990. Vogue ended with the dancers around a table re-enacting the last supper but, obviously, more dramatic.

There seemed to be different “acts” during this show. The first “act” seemed to have very religious (and controversial at times) undertones to it whether it was the metal crosses used as stripper poles or the re-enactment of The Last Supper.

Another one of the “acts” seemed to be just all about sex. This included a video interlude of Madonna’s song S.E.X. complete with the dancers simulating sex on four beds that were on a tilted part of the stage. This one is the one that got to me the most. I am a firm believer in artistic expression but I do believe there is a line and I think Madonna dances on that line to the point where you don’t know what to think about it anymore.

There was an “act” that seemed to get a more old school when she was playing a group of songs including Body Shop where the stage was completely transformed into something resembling a mechanic’s body shop. There were tires and car parts everywhere and utilized by the dancers. This “act” definitely had a Billy Joel type of feel to it but it worked and just showed off Madonna’s versatility.

There was never a boring moment at this show. Even when Madonna would change into one of her bazillion outfits, the dancers stayed on the stage and kept the energy alive.  At times, it was hard to believe that you were at a concert. It felt more like going to see a new Cirque Du Soleil. There was one dance with just a guy, a white scarf, and a bunch of fans. At first when I saw this on stage, I shrugged it off as being cheesy and boring, but it was truly genius and beautiful.

Madonna played music from every one of her “eras.” Of course she played the classics like Like a Virgin and she ended with the poppy hit Holiday, but she also stuck to promoting her new album and playing songs off of that including the title track Rebel Heart. It didn’t matter what song she was singing, the whole crowd was into it.

Last night was more than just a concert, it was a show, it was a performance. Last night wasn’t just entertaining, it was mesmerizing, it was jaw dropping, you didn’t want to blink for fear of missing something awesome.