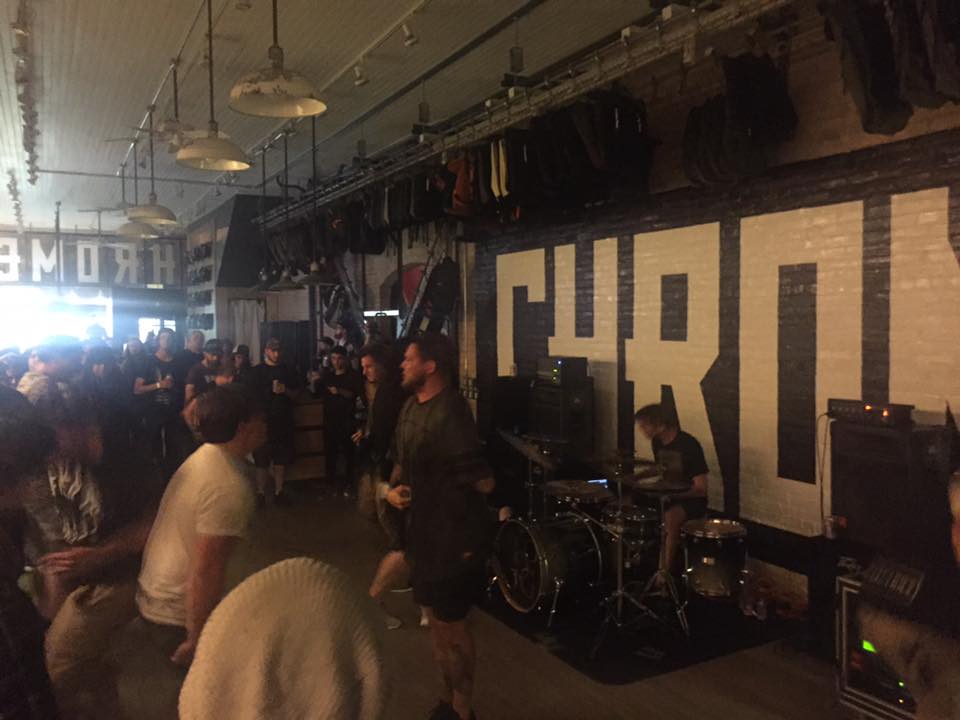 Did we have to go to the show last night? No.

Was it a good idea to be out and about in a storm like we had last night? Probably not one of my greatest ideas.

Did my friend Angel and I suck it up and go to the show because that’s what we do? You betcha’!

We were sitting at our favorite little burrito joint in West Saint Paul enjoying some pre-show eats as the second wave of storms blew through town. The tornado sirens were going off all around us and, as Angel was freaking out (she’s from Last Vegas and not used to weather like this), I shoved the last guacamole covered chip in my mouth and we went off into the rain. Angel’s face was pure panic as we whizzed down the freeway in my little Prius. The wind was more than enough to sweep my car right off the road. Mix that with the rain and we had a more than interesting ride downtown.

We finally landed in a parking lot in Minneapolis. I was kind of familiar with the area but had no clue where the damn show was. All I knew is that it was being held at Chrome Industries. Because of the area of town we were in, I assumed it was a warehouse of sorts. Man was I wrong.

Angel and I walked into the storefront, paid our $2 cover (this was a bank breaker of a show, let me tell you!), grabbed one of the free beers (yes, you heard that right, free freaking beer!), and made our way to a group of friends that we knew. When I finally had a chance to look around, I was shocked. We were not in a warehouse at all. We were literally in a store… a store you would see in a mall… a store full of merchandise (they sell bags, clothes, shoes and accessories for the hipster biker in your life. They had some seriously cool stuff so make sure you check out Chrome Industries!)… what the hell was going on?!

Although the setting was weird and unfamiliar for me, I felt more than at home because I was surrounded by some of the best people in the scene. Apparently the storm scared a bunch of people away but there was a good chunk of us that weren’t going to miss this show for anything. I mean, how could we?! It was only a $2 cover, free drinks, and some awesome bands. A little bit of rain, lightning, flooding, thunder, tornadoes, hail and wind wasn’t going to keep us at home!

The music started and I instantly forgot that I was not in one of my normal venues. Wolf Skin, from Sioux Falls, SD, was the first band to play. Sure, they all had matching shirts on that had the band’s name on it which is totally against my rules but I will give them a pass.

They ripped my heart out of my chest when they told the crowd about how they were supposed to go on a tour, drove all the way to Illinois only to find out that their piece of crap booking agent hadn’t booked a single show. My heart broke in half. As a booking agent, I could never imagine doing that to one of my bands. As a supporter of small, independent bands trying to make it on their own, I found myself calculating how much money was left in my bank account after my trip to Kansas to see if I could support them at all.

Their music was good… at least I think. The bummer about the show last night was the sound. Don’t get me wrong, it was super good for a show being held in a literal shop, but it wasn’t good for someone who goes to really listen to the music. It gave all of the bands last night an uphill battle as far as me falling head over heals for them but none of them were awful. If you want to see how good your favorite band really is stick them in a store and tell them to play a set. The fact that all of the bands were able to keep it together and play through whole sets without any fatal flaws was more than impressive.

The second band to play (and the main reason I was so gung-ho on going to the show) was Roads of Glass. This is the band that Louis joined after stepping down as the vocalist of By The Thousands. They have played multiple times but I’ve never gotten a chance to catch them. Unfortunately, because of the less than ideal sound, I feel like I still really haven’t seen them. Again, that’s not saying that they sounded terrible because they sounded good… it just wasn’t how I wanted them to sound the first time I saw them.

There were two other bands that play last night. Soulkeeper and Zealot. Unfortunately, it was going on 10 PM and I knew I still had about an hour to an hour and a half of driving ahead of me because I had to take Angel home so we left.

All in all, I would say last night was definitely a success even though the sound wasn’t what I wanted it to be. The people were nice, the store ended up actually being a pretty sick place to hold a metal show, and I had a great time.

Driving through the storms last night was probably one of the dumbest things I could have done but it was a $2 show with free beer and all of my friends…. how could I have said no?

Celebrity Sightings- Jerrid of Royal’z; Dustin & Carlos of By The Thousands; Members of More Weight…. I’m sure there’s more… sorry if I forgot you!

Show on Deck- Marijuana Deathsquads/ POS/ many many more