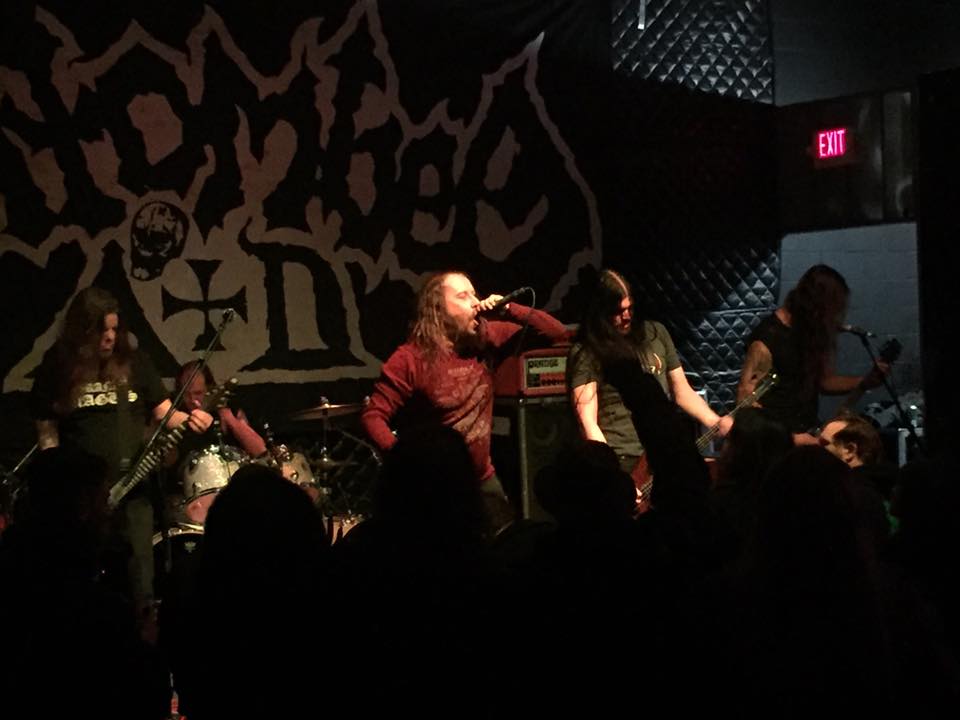 I’m a sucker for international bands. I love the fact that on any given night, I can see a band from a completely different country right down the street from my apartment. Last night was one of my personal favorite flavors of international music– Swedish death metal.

Although Entombed A.D. only has two albums out and has only been a band since 2014, these guys are not new in any way, shape, or form. Entombed A.D. is made up of members of the legendary, defunct band Entombed. I fell in love with Entombed when I saw some Youtube clips of them playing with giant orchestras. I loved the contrast of these heavy metal head bangers playing with the classically trained masters in the orchestra because, as a classical piano playing metal head, I could relate. Although I never got a chance to see Entombed live, I can only assume that seeing Entombed A.D. is just as good, if not better.

Lars Goran Petrov, the singer and an original member of Entombed, had a way about him that was not too far off from mesmerizing. His delivery of the growling vocals was aggressive but not over the top. You could feel that he cared about what he was doing but did so without seeming like he cared too much. He wasn’t trying to be anything other than who he was and the band was doing the same… just being an amazingly solid and tight Swedish death metal band. They didn’t care what the crowd was doing as long as they were having fun and, from the looks of it, the crowd was definitely loving every minute of Entombed A.D.’s set.

Throughout the night, the crowd was pretty calm. Sure, there was some movement and some sort of thing that resembled a pit but, for the most part, people were just standing around and truly enjoying the music of the night. The same can not be said for Dylan Walker, the singer of Full of Hell. I had seen Full of Hell before and something about them intrigued me so I was more than excited to see them on the flyer for last night’s show. Their music is unlike anything I’ve ever heard and Dylan’s energy is unlike anything I’ve ever felt.

If I had to describe their music in one word it would be “bi-polar”. It’s grindcore but with elements of noise mixed in. It’s unique, unforgiving and, honestly it’s genius. The vocals seem a bit sparse but when they happen, they hit you right in the gut. Dylan has a very animated way about him and it’s like every time he looks at the crowd he has a different style of scream and a different face. It’s almost like when he looks at the ground or looks at the pedal board on a stand that he uses for the noise elements, he resets himself and when he looks back at the crowd, he has a whole new “personality”. It sounds weird, I know, and that’s exactly what it is but it’s something that truly comes off as unique and, when you go to a concert damn near every night… unique is hard to pull off.

Turbid North played just before Full of Hell and, although they were much calmer and have a completely different style that Full of Hell, they were a great lead in. Turbid North’s music had a lot more groove than chaos to it and it seemed really mellow compared to everything else. Even though these guys are only a trio, they had power behind them and enough sound to fool you into thinking they are closer to a five or six piece group if you were just listening to them.

The first band to play last night was a local group called Hive. Unfortunately, my friend and I were running a bit late and, for the first time ever, Triple Rock was running ahead of schedule so we missed majority of Hive’s set but, from what I heard, I can tell you that I will be keeping my eye on these guys. The band was tight, clean, and great. The bass lines they had going on appeared to be the star of the instrumentation but all of the members were masters of their craft. Unfortunately, only catching two songs leave me very little to say about these guys but I assure you that they are on my radar and should also be on yours.