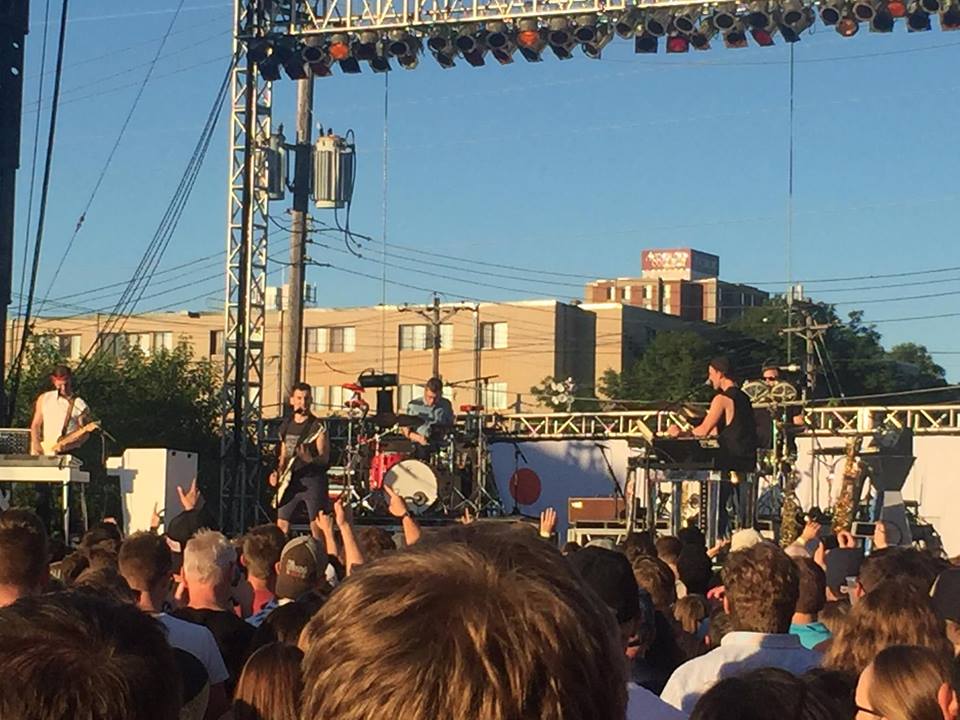 One day festivals are the best. It gives me a chance to get my ginger skin some sun and to have a couple drinks with friends while listening to all sorts of music. Unlike a weekend festival with multiple stages, there is no stress of having two bands that you want to see playing at the same time on stages that are miles away. It’s perfect. You can stand there, sipping your drink and just take it all in while beads of sweat roll down your back. If you ask me, a day festival is the perfect way to spend your Sunday.

Yesterday was one of these perfect days. Well, it was almost perfect.

Local songstress, Jeanne Taylor kicked off the day with her pop sound that seemed to be the perfect warm-up for what was to come for the next seven hours. As she sang, my eyes started to wander around and size up the crowd a bit. The more I watched the crowd, the more I realized that I was definitely one of the oldest people in the audience and one of the most clothed. I don’t know why I was so shocked as this seems to be how many of the audiences at shows like this are. I leaned against the wall of The Cabooze, sipping my drink and people watching with a grin on my face.

Following the short set from Jeanne Taylor was a quick set from Whosah. These guys are quickly becoming one of my favorite local acts. Sure, their music is a bit more upbeat than what I’m used to but their energy is electric and I love it. Their singer has a problem with standing still and his dance moves are nothing short of awkward. It makes their live show relatable in a way. I can’t dance at all but, hey, look at this kid on stage… he can’t either and he doesn’t seem to care. Their music, as mentioned, is super upbeat but has a hint of Foxy Shazam when it comes to the vocals. It was the perfect set to get me pumped for what was to come.

Step Rockets were the final local act to take the stage. All I knew about these guys was that they won some contest to open up for Bon Jovi a couple of months ago. Other than that, I had never really heard of them which is a wee bit strange. For being a band that won a contest to open for a huge act, you would think that I would have at least caught one of their sets around town with how many show I find myself at but I haven’t. I thought that if I finally got to see them, something would click with me and everything would make sense. Well, I saw them yesterday and it still doesn’t make sense. Sure, they were fine, good, great, whatever but there was really nothing that they did or played that stood out in my mind.

I feel like Step Rockets was the beginning of the downfall of my day. Things seemed to get more and more generic as the day went on and my attention span seemed to get shorter and shorter. Sure, there were some bright spots like The Unlikely Candidates’ energy and Mutemath’s drummer but, other than that, the day seemed to be like a broken record on repeat. All of the bands started to sound the same. None of them had a stage show that caught me and the crowd was getting really annoying as the booze started kicking in.

I stood there and did my best to find a bright spot for each band but it was becoming next to impossible. I knew going into the show yesterday that it wasn’t quite my cup of tea but with Bleachers (one of my absolute favorites) headlining, I figured I would at least be in a good mood and could find some way to stay optimistic throughout the day. My optimism seemed to fade as quick as my energy level and by the time The Naked & Famous took the stage, I was about tapped. I tried to keep reminding myself that this is exactly how pop music is supposed to be but that thought wasn’t comforting me as much as I had hoped for and I found myself counting down the minutes until Bleachers would take the stage.

I don’t know why I thought Bleachers’ set would be any different. I mean, the last time I saw them inside the Cabooze was before they really hit it big so they still had a passion and a love for the music. I should have known that with their new found fame came money that could pay for backing tracks leading to a lackluster show but I thought that Bleachers might be different. I mean, they had such a passion last time I saw them and singer Jack Antonoff (of Steel Train and Fun.) had a genuine feel about him. That’s all gone now.

I was more than disappointed when I started to realize that majority of the music I was hearing through the speakers wasn’t really coming from the stage. For someone who has never been to a concert before or only to super huge arena shows (as seemed to be the case for majority of the crowd), Bleachers’ set was absolutely perfect. For someone who noticed that you could hear guitars through the speakers but there was no one on stage with a guitar, it was heartbreaking. I cringed as I saw this favorite band of mine completely sell out to the generic masses. Even when they played my favorite song “I Wanna Get Better” I couldn’t help but feel disappointment as I heard the vocals coming through the speakers but Jack didn’t have a microphone anywhere near him.

The only truly enjoyable bands of the day were the two local openers who didn’t seem to get much recognition from the crowd or the other bands. They were the only acts that played with a sense of passion and feeling. They were the ones with sounds that stuck out in a day full of some of the most generic music out there.

This sunburn was not worth it.

One thought on “Don’t Take My Money”