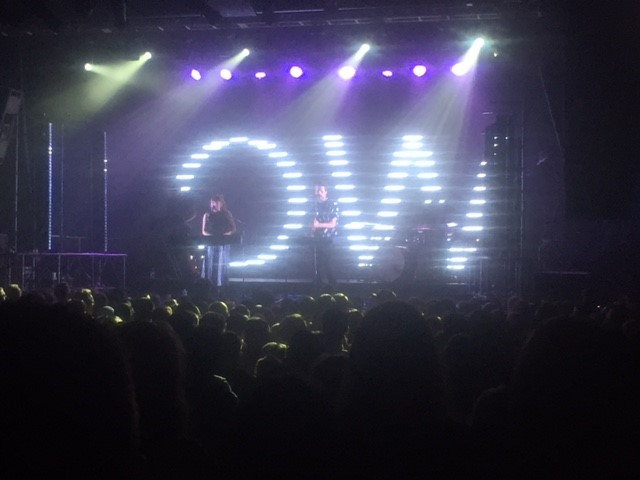 With my annual trip to Riot Fest in Chicago just a couple of days away, my life has gotten pretty insane. I’ve been busy making sure I have everything I need, packing, trying to spend as much time with my cats as I can and everything else that goes into a trip. As excited as I am to head out of town for a couple of days, I’m stressed out to the max. I had so much to do last night to prepare for my trip but I found myself at First Avenue for yet another show and I was more than okay with.

Twenty-six year old Jaymes Young started his set just a little bit before 7PM and instantly wooed the audience. His singer-songwriter vibe was very calm and very laid back. His music leaned more towards the slower pop song side of the spectrum. I know this isn’t typically my thing but there was something about his voice. It was strong enough to be the king on the pop charts but also had this hidden darkness about it that could easily make him the prince of the indie scene. Although he seems to be fairly new to the scene, this tour definitely won’t be the last the Twin Cities will be seeing of this kid and I can’t wait to see where his talent takes him.

The only other band performing on Tuesday night was London based Oh Wonder. It’s not that these guys were a “must see” band for me but there was something intriguing about them that had me a bit excited as the stage was being turned over for them. There’s hype about this band throughout many music scenes. You have people in the indie world praising them, people in the alternative world loving them, and people in the pop world obsessing over them. I love bands that bridge the gap between different genres and that seemed to be exactly what Oh Wonder has been up to the past couple of years so yeah, I was excited.

The set started off really quiet with the duo standing in almost complete darkness as a couple lights flashed towards the back of the stage. Josephine Vander Gucht and Anthony West are the duo that is Oh Wonder (although they brought a couple backing band members along with them) and, even in the darkness, they instantly stole the spotlight. The chemistry between the two members is truly a beautiful thing. It’s not clear if they are related, married, friends… but honestly, who the hell cares. The connection that so obviously exists between the two of them is more than enough to give you goosebumps.

As the first song ended and blurred into the second, the energy in the room instantly changed into a dance party. The dark stage was instantly illuminated by a giant light fixture that spelled “OW” and the duo started jumping up and down along with the beat. The stark difference between the opening song and the second song was exactly what I was hoping for. This band literally just went from a sad and sappy indie band to an upbeat and poppy dance band and I loved it. As the set went on, the band continued to switch flawlessly throughout a spectrum of genres. To say it kept the set feeling fresh and fun would be an understatement. It honestly felt like I was watching a different band with every song but the members somehow always looks the same and had the same mannerisms.

Oh Wonder played a great mix of songs from both their 2015 self-titled debut and their July “Ultralife” release. I was struck by just how many people in the nearly sold-out audience were singing along to the songs. Sure, I recognized a couple of them but not to the point where I could keep up with the words. Their set seemed long but not drawn out and it never became boring. Even during their slower ballad-like songs, there was an undeniable sense of energy that kept me interested. After over an hour of music that truly bridged the gap between too many genres to list, it was over and the crowd reluctantly headed toward the exit.

I’m overwhelmed by everything I still have to do before I head out to Chicago. I’m stressed out and I don’t see that changing until I get in my car and head out of town. That’s why I went to the show last night. Are you stressing out over something that you don’t need to stress over? Or have no power over? Go to a show. It helps. I swear. (I mean, it doesn’t help you pack or instantly clean the apartment for you but it does help calm you down.)