My Life’s A Mystery 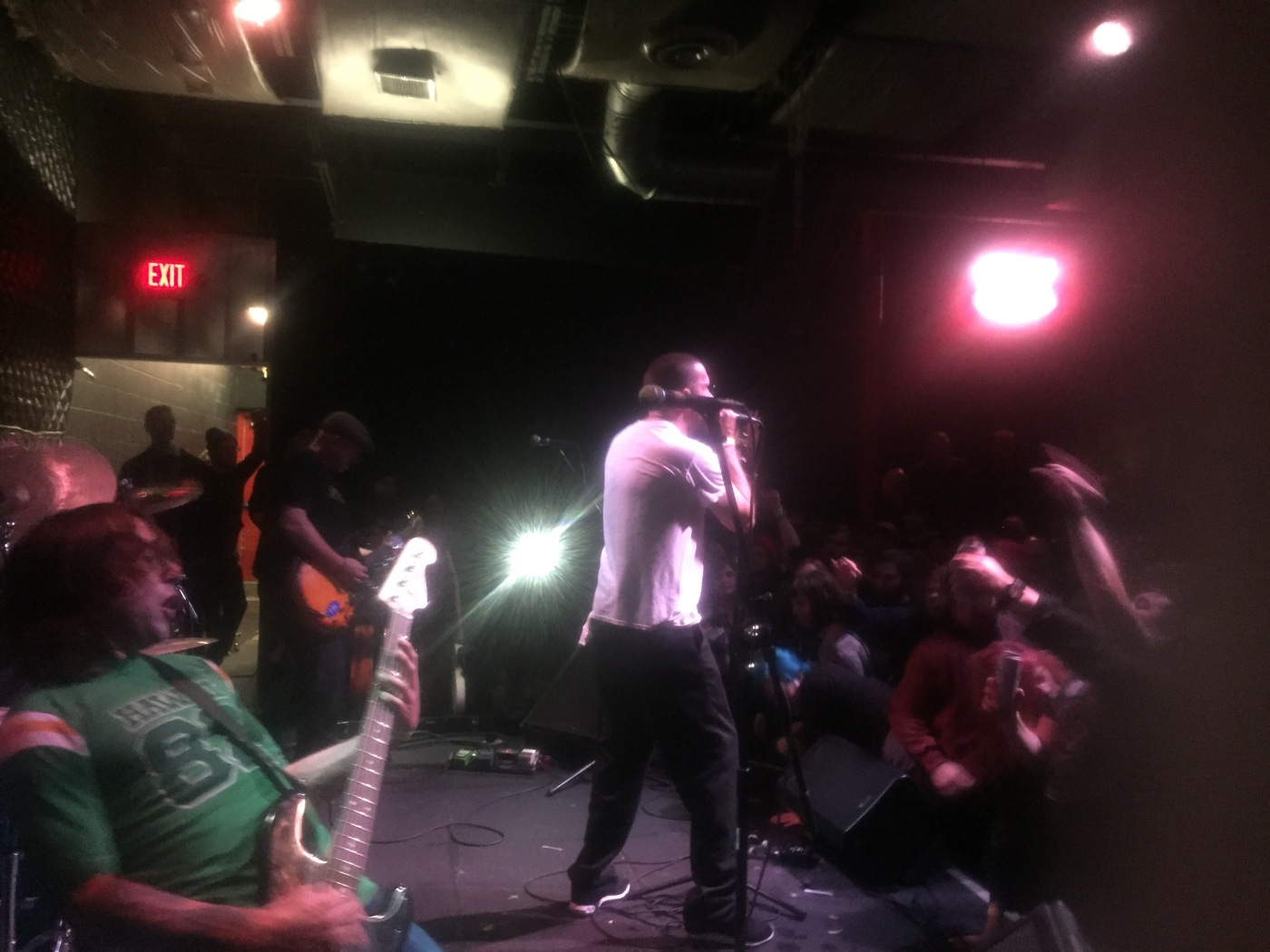 My long and extremely emotional Minnesota goodbye to The Triple Rock Social Club continued last night. We are down to the single digits for my nights spent at this legendary club and I honestly am so overwhelmed with emotions you would think I am loosing a best friend. I walked out of the chilly November Minnesota air and into my home away from home. I claimed my typical spot against a side wall in the intimate venue and waited patiently for the music to start and for it to take my mind off of losing this second home.

It didn’t take long- at 9:30 sharp Class of 86 was on the stage and any depressive thoughts in my mind fell away instantly. Hailing from Minneapolis, Class of 86 was the perfect act to open up the Saturday night show. Their progressive punk sound that, at times, felt a little pop-punk got the night started off with a bang. Although the sold out crowd was trickling in throughout their quick, thirty minute set, there was an energy that seemed to take over the crowd. It was evident that the guys in Class of 86 were more than honored to be playing the last Saturday night show to be held at The Triple Rock. Multiple times they spoke about how honored they were and how crazy it was that they were the ones to open this show. Although all of the sappy talk about this show being the last time we will ever be at this spot on a Saturday was starting to bring back all of the emotions I had been trying to hide, as soon as the band jumped into a song, I was catapulted back into my happy place and ended the set with a smile on my face.

Following Class of 86 was Darius Koski’s “solo” set. I only put solo in quotes because he was joined on stage by a drummer and bassist. Darius (and the other two men who joined him on stage) is actually a member of Swingin’ Utters. Sure, you could say he was double dipping with playing two sets but this quick solo set was such a change from what was to come from the headliner. There was a very calm vibe about his music but there was still a sense of energy that you would expect from any seasoned punk musician. As Darius strummed on his acoustic guitar (which was eventually replaced by an electric one) it was evident that the crowd was giving him the utmost respect. Although he came off as just an everyday Joe, the respect that the crowd was giving him was a constant reminder that Darius is anything but an everyday Joe– he’s in one of the more legendary punk bands that has been around for years and has always stayed true to their sound. His set was too short and I wish I got to hear more of his heart-on-his-sleeve music but I was also anxious to see what else the night would bring.

I was super excited to see the next act, Western Settings. I have been listening to them for awhile now but have yet to catch them live– this was my chance. This four-piece group has a sound that belongs in the local scene. They mesh perfectly with local bands like Dillinger Four and Banner Pilot while keeping a complete sense of individuality. At times their music is punk, at time just pop-punk, and at times it’s indescribable. This unique sound kept their set feeling new with every song they played. The crowd was quickly gaining some momentum and the bumps between audience members quickly turned into more pushing and shoving. At this point the venue was packed to the brim and it was obvious some people were there just to have one last chance to catch live music at this iconic venue and some were there for this specific show. Regardless of why they were there, by the end of Western Settings’ set, everyone in the venue was eating out of the palm of their hands and, as the band left the stage, some of the audience pleaded for one more song but, unfortunately, that was all we were given. Still a fairly new band (they formed in 2013), I think we can all expect a lot more from Western Settings including many more visits to the Twin Cities and you best believe I’ll be there when they come back.

Closing out the night was Swingin’ Utters. Since the late 1980’s (other than a hiatus that lasted seven years), Swingin’ Utters have been a staple in the American punk scene. Although punk music has gone through many phases and many changes, Swingin’ Utters have stayed true to the California street punk sound that they started out with. With only singer Johnny “Peebucks” Bonnel and Darius being the only original members left standing, the other three members mesh perfectly with them. Unless you were a huge fan back in the day or did some research, it would be easy to be fooled into thinking this was the original line-up because of how well they all work together and the perfection of their set.

As soon as the group took the stage, the crowd exploded into a sweaty mess. I watched from the safety of the side as the front row had their knees slammed into the stage which had the perfect height to hit you in all the wrong spots– mostly the knees. I couldn’t help but think about how much I’m going to miss waking up with those bruise marks on my knees. It hurt like hell and made my legs look like crap but it’s something I truly think I’m going to miss more than I realize. Bodies were getting shot around as if they were in a slingshot of sorts. That energy from the crowd was matched only by the band members themselves. Johnny (the singer) wasn’t afraid to egg the crowd on and did it consistently throughout the over hour long set. He stormed across the stage and swayed his arms around with an undeniable sense of power. You could literally see him feeling the music he was performing and, because of that passion, that love, the crowd seemed to reflect that. Sure, he was performing his heart out but the audience was doing the same thing and Johnny was quick to realize it thanking the crowd numerous times for their support.

Throughout the set he seemed humbled by the fact that the crowd was going so hard for this band. He spoke about how sad it is for, not just the local community, but the punk community in general, to lose this venue. He joked around about the influence that Dillinger Four (Triple Rock is owned by one of the members) had on him and the band. “I don’t know if any of the D4 guys are here, but if you are… thank you… thank you!” he said and, within moments, Paddy (bassist of D4) came out on stage offering one of the biggest hugs I’ve ever seen. Johnny had to stop singing and you could feel the true appreciation and love he had for this moment. Those type of moments happen often at the Triple Rock but it touched me more on Saturday night than other nights. Maybe it’s because it’s one of the last times I will see a moment like that in a place like that, maybe it’s because of the emotion that you could see in Johnny’s face and feel in the air– whatever it was, that is a moment that will live with me for a very long time.

I only have one more show slated at The Triple Rock and it’s the last show ever. It’s sure to be an emotional night for many people including myself. I’m sure I will laugh, smile and cry all in one sip of my PBR tall boy. I’ve been downright bummed out since word broke that the Triple Rock will be no more and I’m dreading Tuesday night because I know that will be the end of my Minnesota goodbye. That being said, shows like Saturday night’s show will never leave my mind and will help keep this venue alive in myself, and many others who have been calling it home, for years to come.

Drunkards Taken Out By Security- 3