I Have Frying Pan 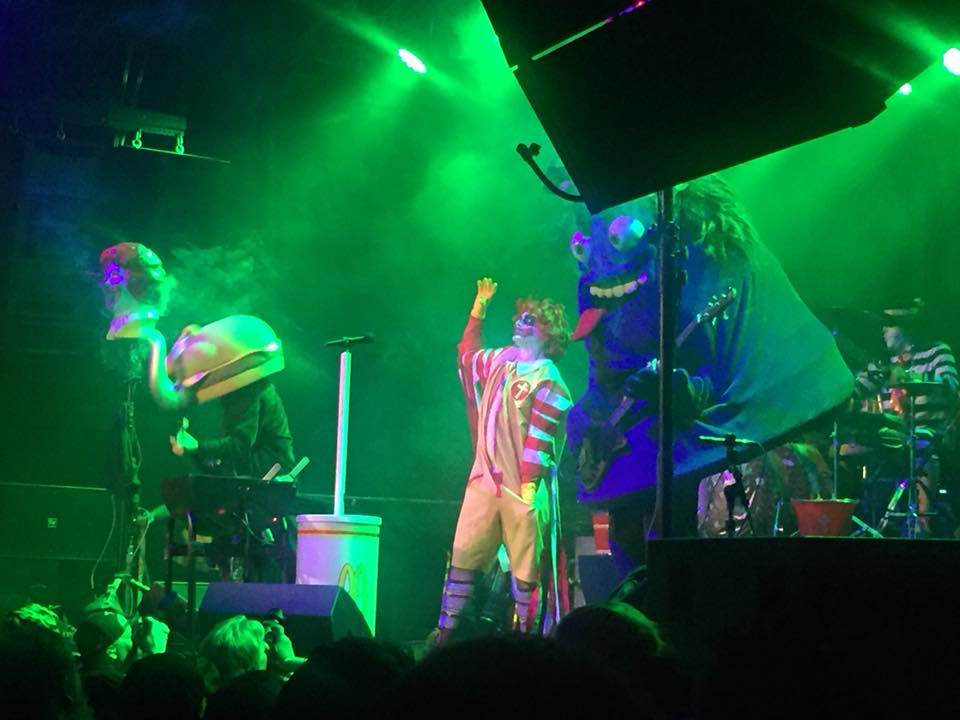 Nearly a year ago I wrote about what happens when Gallagher, Ned Flanders, a mariachi singer, and Ronald McDonald walk into First Avenue. Well, here’s another one for you-

I mean, come on people, I really can’t make this shit up! Last night was one of the oddest Sunday nights I have had in awhile but in all of the best ways.

The night was kicked off by a favorite local group of mine- Impaler. Since 1983, this group has been shocking audiences everywhere and have truly made a name for themselves in a niche market. With fake blood (although not as much as Gwar) and the mock disembowelment of a band member, how can you go wrong? Impaler’s music is trash and intense but still somehow approachable in a way. You can hear the influence of Motorhead and Alice Cooper but also some hints of more 80’s glam metal in some odd way. I’ve always loved their music and their intense and completely off the wall live show is just the icing on the cake. I knew what to expect when walking into the show on Sunday night but it was clear that majority of the audience did not. The crowd stood there, stunned, as singer Bill Lindsey ripped the guts out of “Dr. Corpse” and proceeded to chew on said guts. Impaler is one of those bands that I will never get sick of seeing live and I’m already excited for my next chance.

After the fake blood was cleaned up, the stage was set for the next act- Galactic Empire. (Full disclosure- I know very little about Star Wars not do I care to. Not my scene, not my thing. That being said, my review of Galactic Empire may seem harsh just because I have no attachment to Star Wars and have yet to give in to the hysteria surrounding the franchise.) Galactic Empire took the stage to airy music as the lights swirled around the packed venue. Dressed up as characters from Star Wars, the five piece group took their spots on stage and wasted no time jumping into the metal-esque covers of classic Star Wars tunes. Sure, I knew the Imperial March song but that’s about where my knowledge of the music ended and after just a few songs, their shtick was old to me and I was ready for something else to hit the stage.

I was alone in that feeling, just like majority of the crowd was shocked by Impaler’s antics, I was shocked by the way the crowd was eating up this theatrical metal music. People were banging their heads, waving Yoda hand puppets in the air– everyone was having the absolute time of their lives while I was over in the corner checking my phone wishing they would be done already. Now, don’t get me wrong, I get that the technicality and pure talent of this band is truly amazing. The feuding guitar solos definitely got my eyes off my phone and onto the stage but, nonetheless, other than the costumes and swirling lights, there wasn’t much to watch. My lack of knowledge and the lack of movement on stage led to (what I thought was) a super stale performance but to each their own and I could tell that majority of the audience was lovin’ it.

Speaking of ‘lovin’ it’, closing out the night was everybody’s favorite drive- thru metal band- Mac Sabbath- the Black Sabbath/ McDonald’s parody act that pioneered the drive-thru metal scene. Mac Sabbath– I mean, the name pretty much says it all but in case you can’t figure it out, this group plays Black Sabbath covers where all of the lyrics are about McDonald’s and fast food in general. If that isn’t entertaining enough, throw in some messed up looking costumes that resemble the McDonald’s clan and a grill on stage and you have the whole package that is a Mac Sabbath show.

Mac Sabbath is one of the few bands that still has a sense of anonymity about them. With no interviews ever done except through their manager, the members of Mac Sabbath are a bit of a mystery but there’s no way to hide their talent. Although the band is a bit of a joke, the musicality of the members is not. If you take away the costumes and the outlandish stage show, you are left with a truly talented group of guys that can nail a Black Sabbath cover show effortlessly. Beyond that, the way the members can play in their over sized costumes is beyond me. Guitarist Slayer McCheeze and bassist Grimalice (because, let’s be honest, they can’t use the trademarked McDonald’s names) somehow pull of flawless lines of notes while wearing costumes that must be next to impossible to see through and even harder to maneuver around in.

Mac Sabbath’s set seemed short and, with only one album out, that makes sense. With only about ten songs performed, although their set was quick and dirty, it seemed to satisfy the crowd who left with smiles on their faces as they joked around with friends about how insane and outlandish the night was. Whether you went for the music or went for the entertainment value, there was something for everyone at Sunday night’s show making it a perfect way to kick off anyone’s week.

Now you will never have to wonder again what happens with a shock rocker, Darth Vader, and Ronald McDonald walk into First Avenue. You’re welcome world.