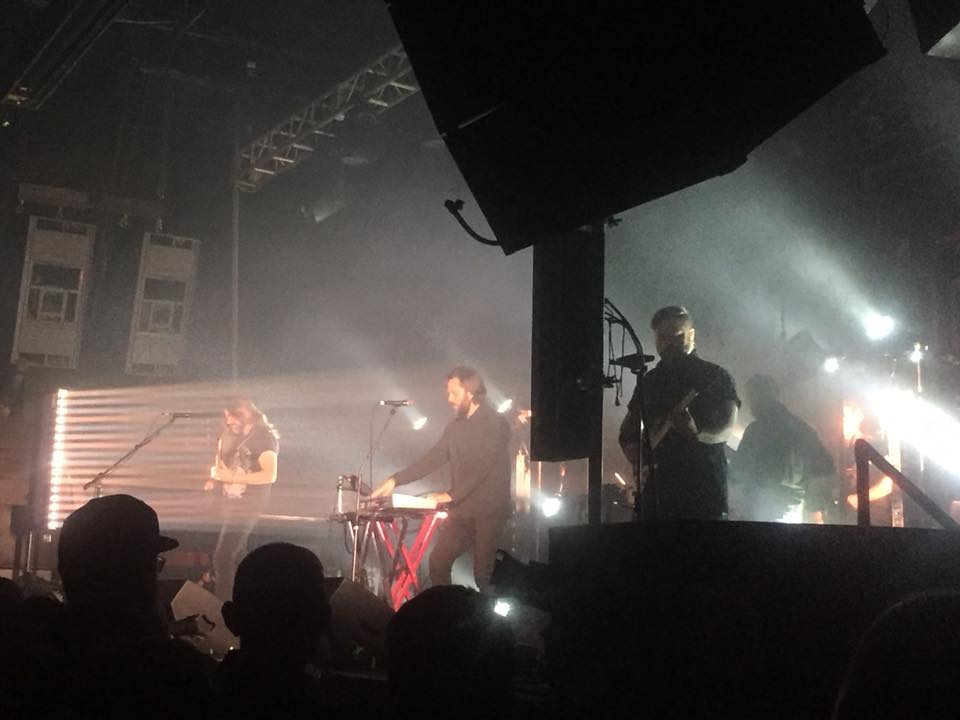 Some people think that metal music is just a dick showing contest of who can play the fastest and scream the loudest. I honestly used to be one of those people but, in my angsty teenage years, that’s exactly what I wanted- loud and fast. Now that I’ve grown up a bit, I’ve realized that metal music is so much more and last night was a perfect example of that.

Norwegian progressive metal band Leprous kicked off the show just a little bit before 8PM in one of the more bizarre ways I’ve seen a metal show kicked off. As the screen concealing the stage disappeared into the ceiling, the stage was set with lone member sitting behind a cello. This cellist jumped right into an emotion and talent filled short intro as the crowd stood there stunned and probably trying to figure out what exactly was going on. This intrigued reigned supreme throughout Leprous’ short set. Their sound, at times, came off as extremely experimental in a way what with their peculiar harmonies and complicated rhythms that, at times, felt like they may fall apart. There were moments during their set that reminded me of bands like Enter Shikari with that experimental vibe about it but, at other times, I could hear the blatant influence of The Dillinger Escape Plan when the group broke into heavy parts of the music. I’ve said it before but Leprous is a group that is next to impossible to classify but maybe that’s the point. Their music makes them stand out in a scene where heavy and loud can sometimes overshine pure talent but Leprous makes sure that you see and hear that talent and uniqueness. I walked into First Avenue on Saturday night having never heard of this group before but I left with a new favorite. Had the other two bands been anyone else, I think Leprous could have easily stolen the show but, when up to against great bands like The Dear Hunter and Between The Buried & Me, this just wasn’t a show to be stolen.

The Dear Hunter was the next band to take the stage and I could feel my excitement levels rise as the house lights went off and I saw the band members taking the stage. Fronted by Casey Crescenzo (of The Receiving End of Sirens fame), The Dear Hunter, like Leprous, has a sound that refuses to be categorized. When it comes down to it, I guess you could call these guys progressive metal but that just doesn’t do the genius of this band justice. One of the coolest elements of this band is the fact that majority of their albums are ‘acts’ in an ongoing story line. The future of this band may already be mapped out due to Casey knowing exactly how the story is going to end, but watching their journey throughout the years has been nothing short of exciting and I always find their live shows interesting.

As mentioned, their sound doesn’t fit one genre. There are times when you hear the metal influence of the music what with the chugging guitars and the drummer banging on the cymbals as hard as he can, but, at other times, you feel like you may be at a carnival of sorts with the keyboards doing a sort of oomp-pa-pa thing throughout a song. It’s that diversity that has me always coming back to this band. The almost symphonic rock sound seems like it would be the most perfect soundtrack to a rock opera of sorts although I’m not holding my breath for that. It sounds like there will be some graphic novels released once all of the acts have been finished and I’m already anxious to see what those are going to look like. The Dear Hunter is one of those bands that I could watch night after night and not get bored with. Their are so many nuances to this band that you can’t catch every little sparkle the first time you see them. Hailing from Rhode Island, lord only know when I’ll be able to catch these guys again but I am already getting excited for my next chance.

Closing out the already truly impressive night of music was North Carolina based Between the Buried and Me. This group truly needs no introduction and maybe that’s why singer Tommy Rogers rarely addressed the crowd except for a few quick thank you’s between songs. BTBAM’s first album came out in 2002 and since then they have been one of the biggest names in the progressive metal scene. Much like the previous two bands that performed earlier in the night, BTBAM is impossible to classify into any specific genre but who the hell cares. They are great at what they do regardless of what you want to call what they do.

Tommy has a truly impressive vocal range that will make even the most steadfast metal music hater question all of their life choices. The way he is able to flawlessly switch from an unnatural naturally sounding falsetto (don’t make me try to explain that to you– you just have to hear it) to one of the most primal and brutal growls I’ve ever heard is truly -jaw dropping. The rest of this five piece refuses to be out=shined by Tommy and at any given point throughout their eight song set followed up two song encore (their songs are long almost concept songs so their set was actually super lengthy) I found myself in the middle of a battle between eyes and brain as to who I should be watching on stage. The lights whizzed across the packed venue which just added a sense of dramatics to the already dynamic show.

During the previous two bands, the crowd seemed to be more interested in just bobbing their heads along to the beat versus pushing their neighbors around a bit but that all changed when BTBAM took the stage. It didn’t take long for a good-sized pit to open up in the middle of the audience. Although I couldn’t see much from where I was standing, there were multiple times where I saw some extremely sweaty individuals get spit out from the pit to catch their breath before they pushed their way back into it. I may not have been in that pit but I could feel the energy from where I was standing and that just added another element to an already next to flawless set from BTBAM.

Last night wasn’t about how fast and loud can a metal band play. It was about vocal power, uniqueness, and straight up talent. Metalhead or not, had you been at Saturday night’s show, I think you would have seen a side of the metal scene that deserves more attention than it gets. If you were there, feel free to hit me up today so we can gush about how truly amazing the night was!

Between the Buried and Me

Overheard in the Crowd- “Dude, I see that chick at every fucking show I go to. I wonder who she is.”