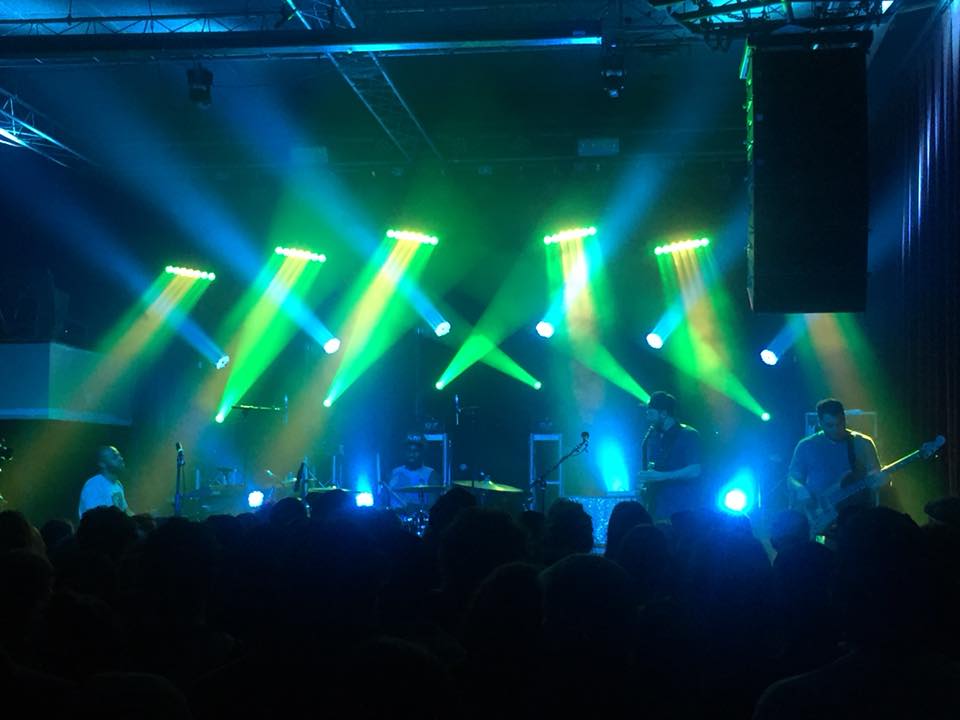 I probably should have stayed home last night to continue my recovery process. Apparently just a couple of nights in is not enough to completely scrub strep and the flu from your system when hit with them at the same time. That being said, I’ve been so bored sitting at home and I’m running out of new movies to watch so I grabbed my cough drops and headed out the door to a show. If medication and sleep can’t make me feel better, a show would probably do the trick… right?

I walked into The Fine Line just as local opening act PHO was taking the stage. The brilliant thing about PHO is, even though I’ve seen them more times than I’d like to admit, their show never gets old and their music always sounds new. Their unique funk music has a very jazz influenced vibe to it but it also has a very just straight-up funk feel to it. It’s the type of music that makes you want to get up and dance and, even though I could barely breathe due to being sick, I couldn’t help but move around a little bit to the beat. I watched in awe as the seven piece flawlessly played through their hour long set. The precision and respect of the music with this band is definitely something that even a non-music person can catch onto.

Each member was given a chance in the spotlight but no members stole the spotlight. Sure, there were dazzling solos from Aaron Levine on the sax and amazing lines of notes coming out of Lukas Skrove’s trumpet but they never came off as showy and the way the loud horns respected the rest of the band was truly impressive. PHO is not afraid to have swells big enough to overcome the listener but at the same time, they aren’t afraid to have quiet calmness wash over the crowd either. It’s those dynamics and their energy on stage that made their hour long set seem to fly by and, honestly, when it was done, I wanted more.

After a half hour change-over, the stage was set for headlining act TAUK. Full disclosure– I had never heard this band before but had heard nothing but good things about their live show. Many friends told me it was something that could not be missed so I shoved another cough drop in my mother and leaned back against the wall to wait for the music to wash me out to sea. It didn’t take long and after the four members took their spots on stage to a roar of applause, the band jumped right into their lengthy set with a sense of power and I was instantly happy about my decision to leave my apartment.

The smile on my face was huge as I watched the vivid lights dance around the nearly sold out Fine Line. I watched as people danced along to the music or just stood there and took it all in. That’s the beauty of shows like this. I’ve found that funk shows are a very “come as you are” scene and that’s something I truly respect and find comfort in. You want to wear light up shoes? Great! Do you want to wear your parents’ clothes from the 70’s? Perfect! Do you want to smell of cough drops the entire night? We don’t care– come dance with us! It’s truly a beautiful sight to see so many oddball people come together for the love of music. Hell, even if you don’t love the music, you are part of something at a funk show.

Where as PHO’s music seemed to have a very heavy jazz influence in it, TAUK seemed to be a bit more just your classic funk music. Sure, there were still jazzy elements but those elements blended in perfectly to everything else going on. It was damn near impossible for me to take my eyes off of drummer Isaac Teel. The way he made the drumming look so easy and the way he grooved along with the beats he was bumping out was truly infectious and it was impossibly to watch him without a smile on your face. Between that, the unspoken connection between all four members, and the bright lights, TAUK’s show definitely lived up to my expectations and it made sense why so many people were telling me that this was a show I just could not miss.

Would last night have been better spent recovering a bit more with a cup of tea and some extra sleep? Of course. But where’s the fun in that? Last night was not my normal show but enough people told me I had to check it out. I did and I don’t regret a thing. Listen to your friends and go to shows that they tell you to. Even if you don’t think it’ll be for you and you think your friends are crazy– they are probably right.

Show on Deck- Andrew McMahon in the Wilderness