Take My Advice And Run While You Still — 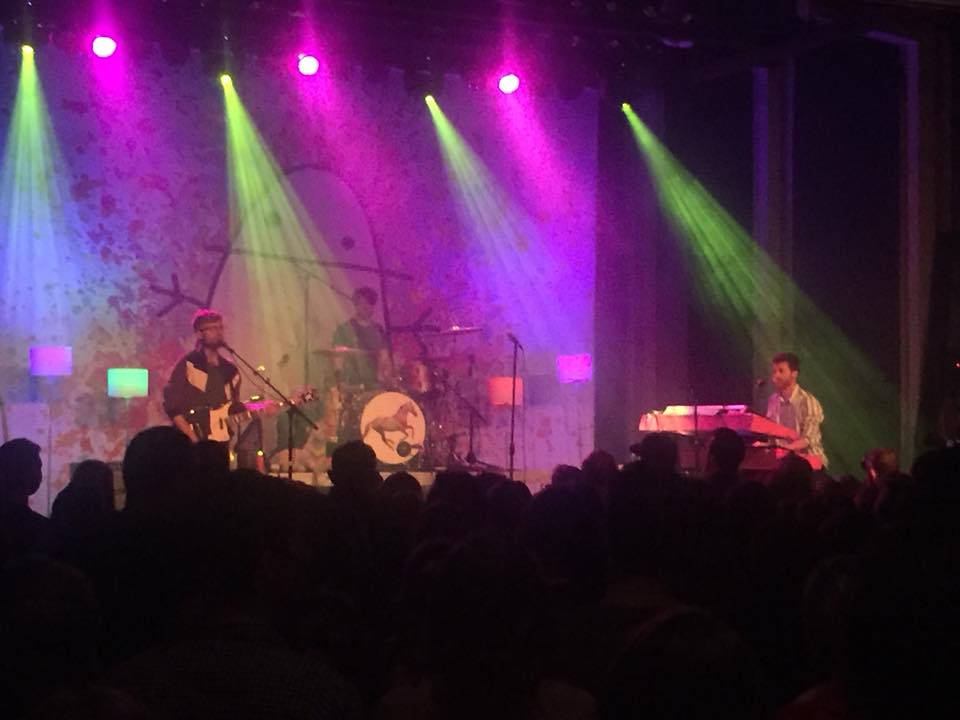 After the excitement of Monday night’s Peelander-Z show, I was ready for something a bit more calm and something that would get me in bed at a reasonable hour. I walked into The Varsity Theater blind as I had no clue who was opening the show or what the headliner was like. I think I have a CD from Jukebox the Ghost (the headliner) in my collection but that collection is vast and I honestly wonder if I’ve ever even opened the CD. Regardless, I walked into The Varsity with a sense of optimism for a nice, chill night… that’s when I realized who the opening act was and my optimism for a chill night turned into an excitement for an energy fueled show that was sure to make me forget all about my current level of exhaustion.

I caught The Greeting Committee when they opened up for Misterwives last June. Although their music was a bit too pop for my liking, their live show completely caught me off guard and I told people to keep their eyes on this young band. Almost a year later and they are still at it– touring the country and turning heads at every single stop. The difference between then and now was the amount of people in the audience that were singing along to every word of every song. Other than that, everything seems to have stayed the same for this group and, although that may sound like a bad thing, it was absolutely perfect and very encouraging to see.

The Greeting Committee is a four-piece of tight-knit friends from Kansas City that create beautifully infectious and poppy songs with heart-felt and honest lyrics. Singer Addie Sartino has a very pure and tender voice while not coming off as forced or anything that it’s not. I love that she sticks to her range (that tends to be a bit lower than most female singers) and never tries to hit notes outside of it. Along with the music, Addie’s voice is a constant reminder of just who you’re watching. Although they have been gaining momentum and radio play, every time you hear a song by The Greeting Committee, there’s no question who it is. There’s something unique yet familiar about this group that, whether it’s your cup of tea or not, will have you bouncing around to the beat and wishing you could sing along.

Okay, I promised myself I wouldn’t spend this whole post on this one opener but I would regret not mentioning Addie’s energy (as I did last time I saw them). I was three Redbulls in by the time they took the stage and there’s no way I could have done what she did. Addie was constantly running across the stage, into the crowd on multiple occasions, and even jumped into the audience for a quick crowd surf around the packed venue. If every band had the amount of energy that Addie had last night I would never have a complaint about a live show. Again, love the music or not– there’s no denying the power behind The Greeting Committee’s live shows.

Headlining the Tuesday night show was Washington D.C based power-pop trio Jukebox the Ghost. Again, I’m pretty positive I have their debut album on CD due to the fact that I liked the album artwork, but I’m also pretty sure that I’ve never listened to it before. That has been a mistake. Jukebox the Ghost wasted no time jumping into a set that was full of infectious beats, goose-bump inducing vocals, and a hell of a lot of fun. So much for my chill night and getting to be at a reasonable time.

As soon as I the band jumped into what would turn into a nearly twenty song set, I was struck by Ben Thornewill’s vocal power and impressive piano skills. I know that part of my instant draw to Ben was due to the keyboard sitting in front of him. As a pianist myself, I love watching people that have the balls to do it on stage and the way they can play while singing always astonishes me. That being said, I wasn’t the only one that seemed to be drawn to Ben. There was a sense of electricity about him (and the other two members for that matter) that effortlessly demanded your attention. Whether he was just sitting behind the piano playing a little diddy behind songs or stalking the stage with his keytar in hand, something about Ben just drew you in and made it impossible to walk away.

Having been around since the early 2000’s, Jukebox the Ghost is not a new band and that becomes obvious as you watch the unspoken connection between the three band members. Whether a nod or even just a quick glance, there was never a moment during their set that felt like someone was a bit off. Every beat was together and every vocal part seemed to be a piece of a puzzle that fit perfectly. Although there was this sense of perfection when it came to their music, their live performance was still extremely fun. With lights whizzing around the room, the band powered through their set with a sense of power and command while still keeping a fun-loving vibe throughout the venue.

I was looking forward to catching up on some sleep last night but Jukebox the Ghost had other plans for me. Last night’s show was one of those shows where you leave feeling energized and anything but ready for bed. Sure, I’m beyond tired at this point but I’d take that feeling over a boring show any night.

Spotted Flying Through The Air- Addie