I’m About That Life 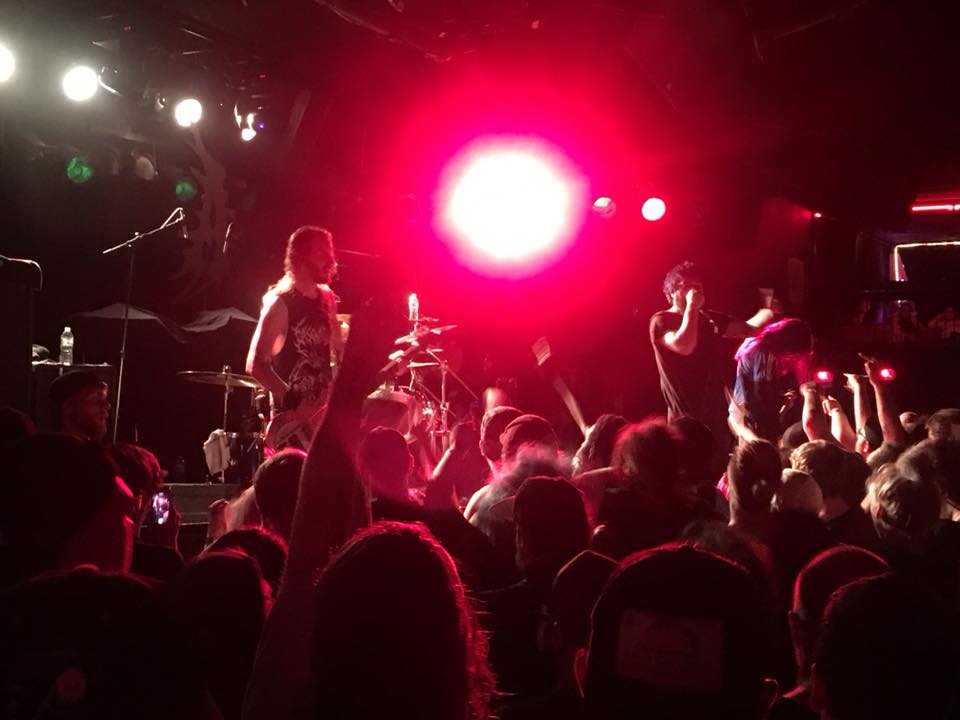 There have been a bunch of amazing shows lately and, although most of the venues go to feel like a second home to me, something has been missing. I found the missing piece last night. Although I’d much rather listen to pop-punk playlists to get me through the day, there are no words to describe the feeling that I get at a metal show. There’s an unspoken sense of family and love that reigns supreme throughout these shows and, even though most of the bands sound the same if you ask me, there’s a sense of appreciation for the music that just no other scene seems to have.

Last night was the first night of Rage Fest. I honestly don’t know why they kicked it off in Minneapolis but I’m definitely not complaining. Kicking a huge metal tour off here has to be a huge energy boost for the bands that are about the embark on a long and exhaustive tour of the country. The crowds in Minneapolis (especially at these metal shows) are probably the most supportive crowds in the country. I’ve been to shows all over the map but there’s just something about the way that fans in the Twin Cities flock to merch tables once sets are done and the way they ask for pictures with band members even when it’s a band that probably half of your friends have never heard of. There’s a sense of respect that radiates from the stage to the fans and vice versa. Even if you had never heard of a band when walking into last night’s show, you paid attention to whatever stage you were at and it was clear that people had the utmost respect for the performers.

With a stage inside featuring one local and the six band touring bill and then an outdoor stage that was showcasing some of the best of the best when it comes to the local metal scene, it was almost like sensory overload. I felt completely overwhelmed as I shuffled from inside to outside trying to catch everything and everyone I could. With so many friends in the local bands, I, of course, wanted to see them but there were some bands on the touring package that I knew I just couldn’t miss due to the hype they have throughout my friend group. With as overwhelmed as I was feeling the second I stepping into the Cabooze last night, I feel like it would be just as overwhelming for you to have to read about each and every band I saw last night so here are some highlights.

By The Thousands kicked the show off inside with a short and early 5:15 set. Although only given about twenty minutes to play, they definitely got the night started off right and within the first couple of songs, people were already getting rowdy and had opened up a small pit. If you know me, you know that these are my boys. They have supported me since I came up with the crazy idea of starting a blog and, even when I had not so nice things to say about them, they still give me huge hugs every time they see me. Their set felt and sounded rushed but that comes with the territory of opening up a huge tour package. Even with the frantic energy, they pulled a flawless set out and definitely wowed those in the crowd that had never heard or seen them before and reminded the fans that had been there since the beginning why By The Thousands is truly a diamond in this scene.

My favorite of the night was definitely California based Spite and it was obvious that I was not alone in that. Third to take the indoor stage, Spite wasted no time and jumped into an extreme set that was full of emotion, conviction, and energy. The crowd mirrored the energy on stage and within the first song I had been pushed back against the wall because the pit had opened up so wide. That energy mixed with their powerful and flawless set created an amazing atmosphere in the packed venue. Although I was sweating my ass off and it was unbearable hot and stinky inside, there was no way I was going to miss a single second of Spite’s set. It was just too good to look away and too amazing to stop listening. Sure, I missed some of my boys playing on the outside stage but there was something about Spite’s live show that I just couldn’t tear myself away from and that says everything that needs to be said about their set.

Since I was constantly moving from inside to outside, I never really got a great view of the outdoor “stage” just because I always found myself being one of the last ones out of the venue. That being said, I was able to hear most of them for at least a song and to say I was impressed would be an understatement. Of course I knew that a couple of them would kill it like Portraits of War and Druid but honestly All That We See stole the crown when it came to the outdoor stage. Maybe it was because it was finally cooling off outside or maybe it was the way that people seemed to ignore the fact that we were on concrete and opened up a pretty intense pit but All That We See absolutely killed it. Their sound was as flawless as it is on their release that I had the privilege of reviewing and that made me so damn happy.

There were a million great moments to go with the twelve band line-up but like so many other nights, if you weren’t there, me trying to put it into words won’t help you understand what it was like when Attila frontman took the stage in his hoodie and sunglasses. You’ll never understand the feeling that radiated through the crowd as it exploded into a sweaty mess with Suicide Silence’s first note. The feeling of beads of sweat rolling down my back means nothing to you but everything to me. How friends would share bear hugs even with said beads of sweat says everything about this scene but if you haven’t gotten one of those hugs it means absolutely nothing to you.

The metal scene in the Twin Cities is a family and, I know I say it time and time again, I am beyond honored to be a part of it.

Crowd Surfers- 17 counted but I’m sure there were more

Broken Bones- 0 spotted but I’m sure people are hurting