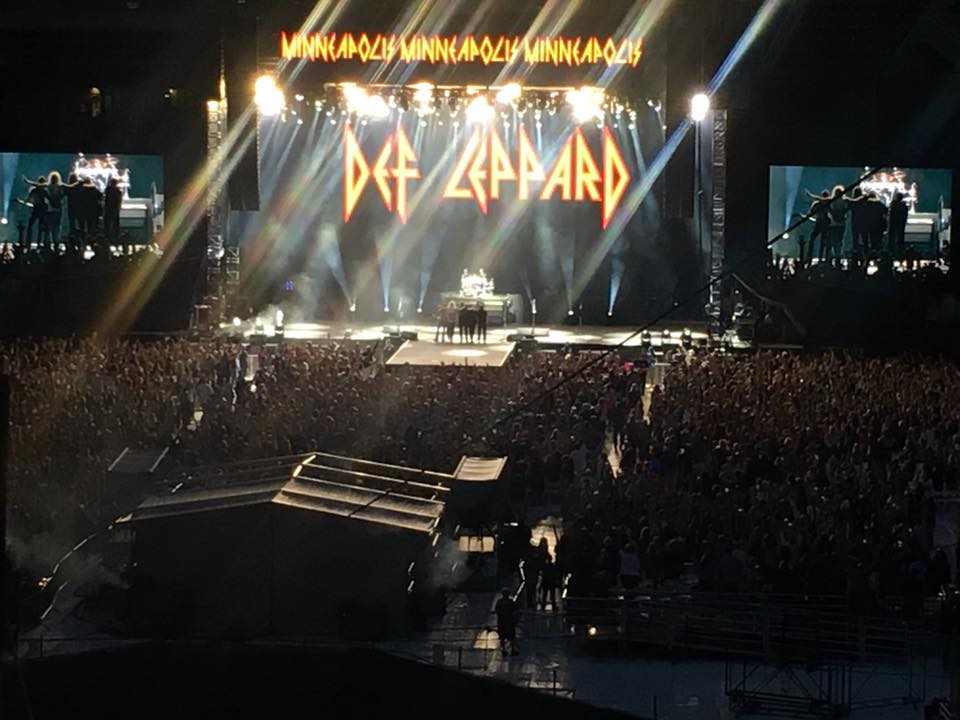 Cheap Trick is one of those bands that, although their name isn’t as big as the other performers, you probably know a handful of their songs. Even if you didn’t the band urged you to sing long “If you don’t know the words, sing even louder!” joked guitarist Rick Nelsen. “We keep on making records regardless of if anyone likes them, buys them, or listens to them.” Rick joked a bit further into the set. Honestly, he may be telling the truth as far as Cheap Trick struggling to stay a household name but, as far as the fans as Target Field were concerned, every song during their quick opening set was a banger. Obviously the crowd went wild when he band played their hit song “I Want You To Want Me” but the amount of support beyond that radio hit truly had me surprised. I was shocked by the amount of people singing and fist pumping along to every song that was crammed into their set.

After a quick thirty minute stage change (it was timed and everything which was actually a super good idea with how long those drinks lines looked– don’t worry, there weren’t any lines for my free drinks), it was time for the almighty Def Leppard. This English rock band that formed in 1977 has been through thick and thin and, just like the headliner and opener of the night, never stopped. They created the soundtrack for an entire generation and continue to put out new music including their new album “Def Leppard” which came out in 2015. This band may be old in age but they are mighty in power. The effortlessly had the entire crowd on their feet throughout their fourteen song set and their two song encore. Whether Def Leppard was the band of your childhood or a band you see as iconic and inspirational for the bands that followed, they put on a hell of show that had you eating out of the palm of their hand.

After the final song of the encore, “Photograph”, singer Joe Elliot was clearly reluctant to leave the stage. He kept wandering as he waved to the fans and grabbing the microphone to thank them no less than a million times (okay, that’s a bit of an exaggeration but let’s talk about a Minnesota goodbye). It was clear that the band appreciated the fans that have support them for over forty years and that appreciation was definitely reciprocated by the adorning fans that were left in the stands wanting oh so much more from this powerhouse of a legendary band.

Closing out the night was a band that needs no introduction- Journey. I mean, I almost feel like I don’t need to write anything about how amazing they were live because you already know they killed it. Journey has been on the top of their game since the mid 70’s. Even with a hiatus and lineup changes including a new singer (Arnel Pineda who joined in 2007), Journey is a band that truly never gave and never stopped believing (see what I did there?).

Journey’s ninety minute set was full of hot after hit. Although I would call myself a die hard fan and thought I only knew the “big songs” I found myself singing along to majority of the fourteen song set. I really think that says a lot about this band. It was seriously hit after hit. Even the “b-sides” they played were hits. That definitely shows the power and longevity of this band. There were many generations singing along to the anthemic rock songs. Parents and their kids swaying in time to the slower ones and everyone and their brother belting out the words to the final song- (do I even need to say what song) “Don’t Stop Believing”. Bands truly just aren’t what they used to be and seeing Journey live last night was a reminder of that.

With a couple of guitar solos bridging the space between songs here and a drum solo there, the members of Journey did a brilliant job of showcasing their talent and proving to the nearly sold out audience that they haven’t gone anywhere throughout the years and don’t plan on going anywhere in the near future. It was clear to see during the solos that the band members are still absolutely loving what they are doing. Drummer Steve Smith’s solo definitely had me on the edge of my seat. Between his smile and the creative way he was using the sticks and doing flashy tricks, I was sold. There was just so much fun behind not only his solo but the entire set that I couldn’t help but grin from ear to ear.

Heading out a bit early to beat the rush to cars and the gridlock that was sure to come as people left downtown, I heard “Don’t Stop Believing” as I was walking out of the stadium. Words will never describe what that meant to me. Sure, that song is cheesy but those lyrics hit many people (including myself) right where it counts and hearing it as I walked out of the press box and realizing that I honestly never imagined I’d be doing this night after night and be working a show as huge at Journey was the perfect ending to a perfect night.

Average Age of the Crowd- 40