I’ve Been Waiting For This Moment For All My Life 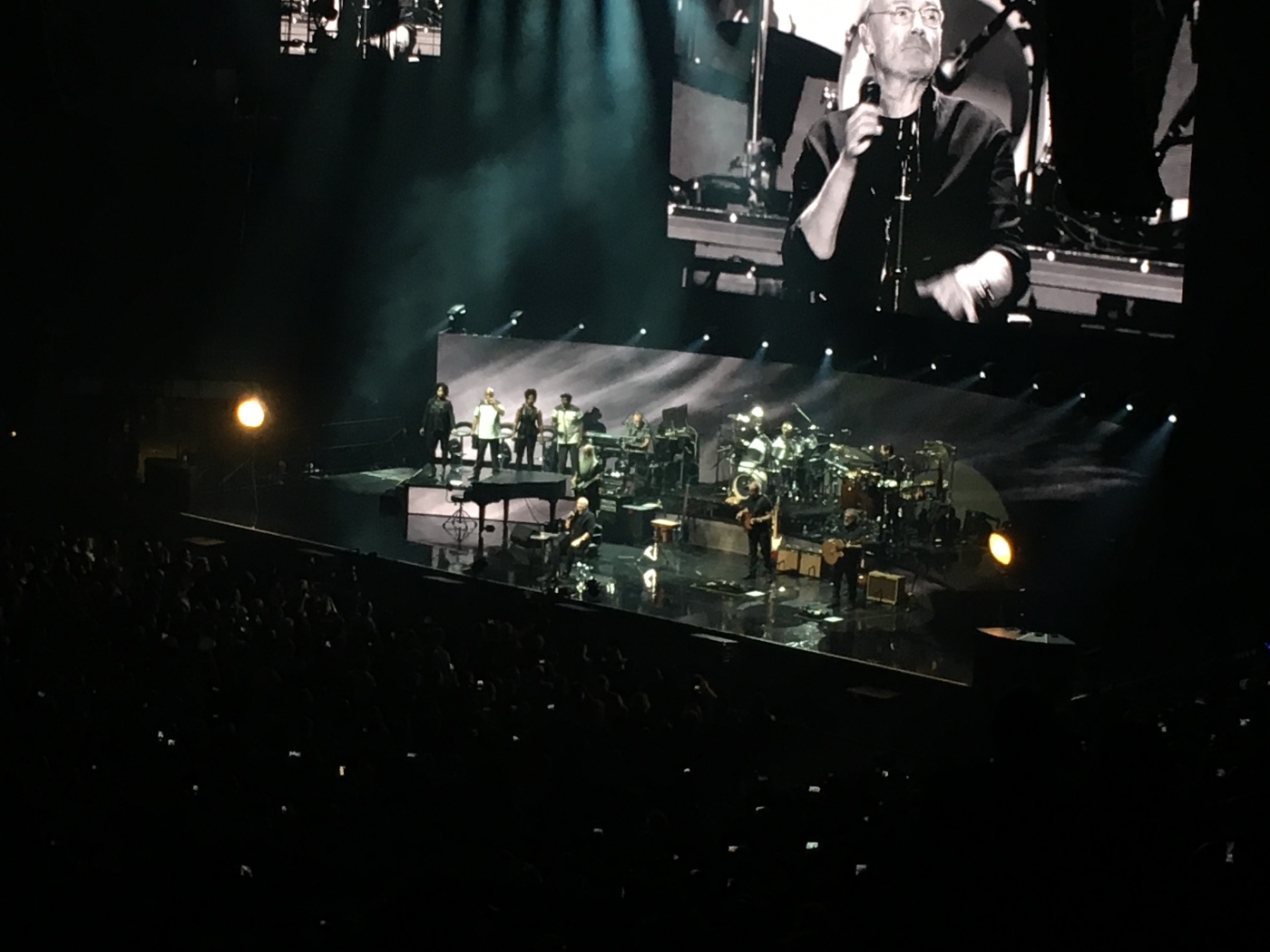 Do I even really need to write this post? I saw Phil Collins. That should say everything you need to know. Phil Collins is a God among men and someone that everyone has heard of. To see that type of person perform live is always close to life changing and always has a lasting effect on me. Sunday night’s performance was no different and I left the show with goosebumps still raised up and down my arms and a giant smile on my face.

At 67 years old, I knew that Phil wasn’t going to look exactly like the album covers I would scan when working at a record shop growing up but I would be lying if I said it didn’t break my heart a little bit as Phil took the stage with a cane in hand and went directly to a rolling chair that was set up smack dab in the middle. He joked about how he had promised he would never tour again but the fact was, he missed his fans. Now, that’s something I’m sure performers say all of the time but there was something different about when Phil said it. You could feel that he meant it and you could see an ecstatic emotion take over his face as the packed audience went absolutely wild. After an unnecessary apology of having to sit throughout most of his performance (Phil showed his priceless sense of humor as he told the audience that he had just had back surgery and, well, his “foot is fucked”) it was off to the races and the legend jumped into a twenty song set that I wish would have never had to end.

Kicking off the set with “Against All Odds (Take A Look at My Now)” there was a clear sense of power and excitement that radiated from the stage. It was obvious that Phil wasn’t too keen on just sitting in the chair and throughout the set could be spotted air drumming, air guitaring and all around just jamming out to the infectious beats of the soundtracks he created. With a couple of Genesis songs, a cover of “You Can’t Hurry Love” from The Supremes, and a couple of other covers here and there, Phil’s song choice was on point and there was an obvious flow to the set. Being on the younger side of the crowd, I definitely felt a little out of place as songs would kick in and the adultier adults around me would scream to their friends that “this is my song” but the excitement was definitely not lost on me. No matter what Phil performed with his beautiful and talented band, it was someone’s song and, even if it wasn’t your song walking into The Target Center last night, it left being your song.

Although there were a million memorable moments throughout last night’s set, one of my favorite had to be when Phil introduced every single member of his band. Now, he didn’t just say their name, but he had a small quip or description of each that had the audience roaring with laughter. One by one the talented musicians would take a polite bow after hearing their name. Standard move. What wasn’t standard was the way every single musician would turn to Phil after their bow and blow a kiss or mouth a ‘thank you’. To say it was a touching and magical moment would be an understatement and it just proved the amount of love and respect there was throughout the arena last night. Phil is a legend and he was treated as one and to see that much respect for a man that has given this world so much music was probably the most heart warming moment I’ve had a show this year.

Although there’s no denying that Phil Collins is a God among men (and that’s putting it lightly), he came off as such a normal human being. I was a bit shocked to see an uber young kid behind the drum kit that was producing Phil’s epic drum solo but, due to a little insight from the blogger next to me that clearly did his research, I found out that this was actually Phil’s son. It made sense and the resemblance was there but it was the moment when his son Nicholas kicked into a drum solo when Phil was not long Phil Collins but he was Nicholas’ dad. Phil went from the front of the stage, moved his chair to right in front of the drum kit and sat there to watch his son’s drum solo. Again, so many touching moments throughout this show I could go on for hours but this was one of those moments that, although small, meant absolutely everything. No matter how big someone gets, they are still a person with a family and with passions. Phil Collins did a good job of reminding myself and everyone else in the crowd what’s really important.

Clearly I could go on and on about all of the little moments that made last night such an amazing experience for not only myself, but the entire crowd. That being said, it was one of those shows that, unless you were there and you felt the passion and love in the arena, it won’t matter. This all probably just sounds like ramblings to you but, to me and the thousands of people who were there with me, these ramblings tell the store of seeing a bonafide legend perform.

Phil Collins is a gift. Last night was a gift. There’s really no other way to put it.