He Was A Sk8r Boi 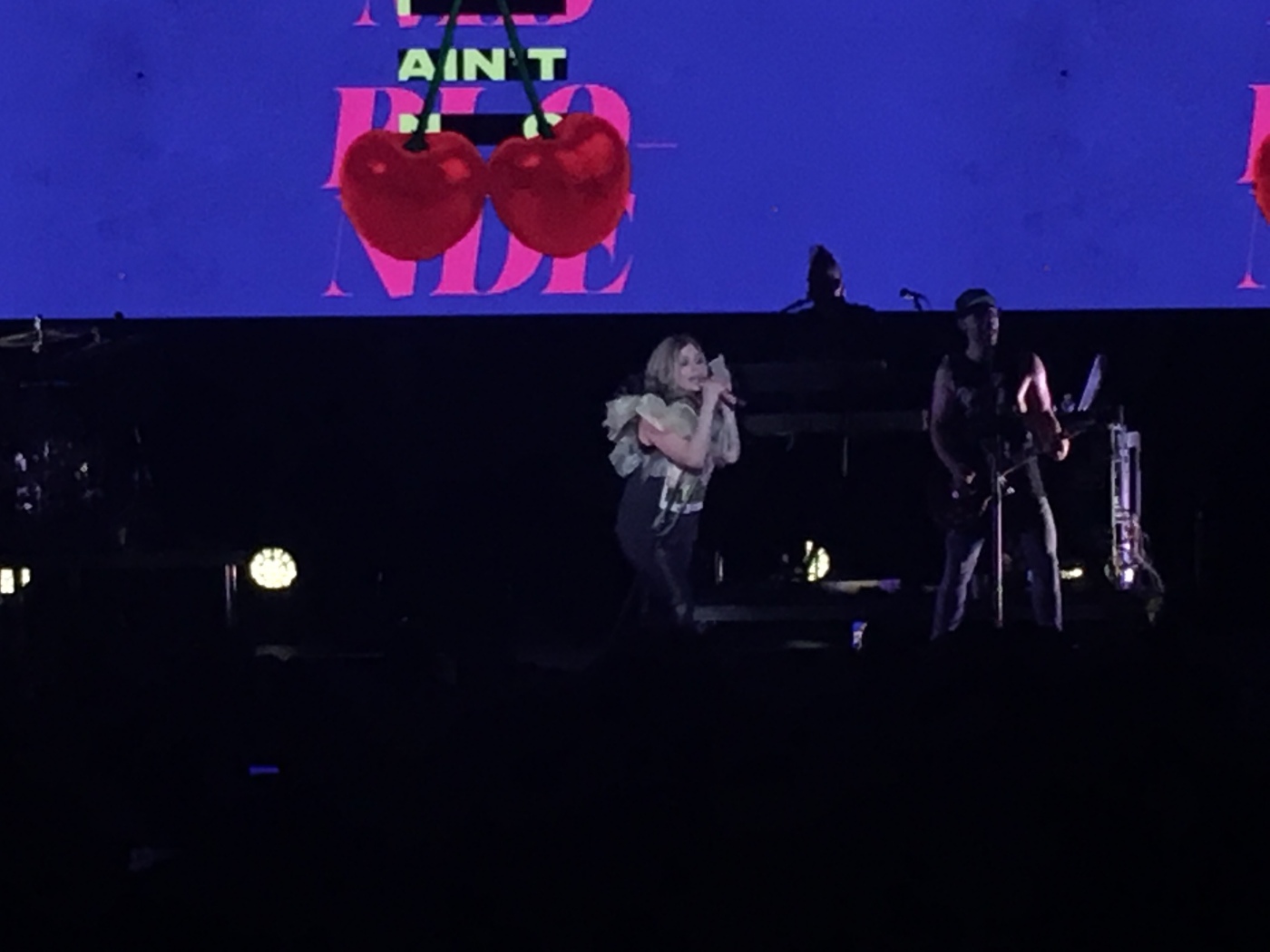 I used to be too cool to listen to Avril Lavigne. Honestly, I didn’t want to be a poser and, by having that mentality, I realize that that’s exactly what I was back when I was an angsty teenager. I was afraid to let people know that my underground-music loving self was completely obsessed with the tomboy-ish pop singer Avril Lavigne. Times have changed and I’m no longer embarrassed to say that I owned my fair share of skinny ties worn with t-shirts and jeans, and I abused the crap out of my hair with a straightener for years because of Avril. It may not have been in the prime of the era of Avril that I remember but last night I finally got to see the idol that I tried to deny but, deep down, loved with every ounce of my being.

There was mass confusion and chaos as I arrived at The State Theatre. From the line to get through security (which moved ridiculously fast) to the line for merchandise that snaked through the foyer of the beautiful theatre (which didn’t seem to move at all), there were people everywhere and the feeling of excitement in the air was damn near touchable. I loved the fact that I was surrounded by not only people my age who were clearly at the show for that irresistible feeling of nostalgia, but there were also older people there with their kids. Avril may forever be imprinted in my mind as a pop-punk princess but it was so nice to see that she has continued to evolve just like everyone that listened to her back in the day. Not long after taking my seat, the lights went down and opening act Jagwar Twin took the stage.

The packed audience was clearly a bit anxious for the headliner to take the stage but that didn’t stop them from greeting Jagwar Twin with a polite round of applause with a couple of hoots, hollers and whistles scattered in there. It wasn’t until his final song, “Loser”, that I realized I knew who Jagwar Twin was and, before that, I had honestly just chalked this guy up to “what the kids are into these days”. I loved his laid back demeanor. There was something very calming about his presence but also something electric. His laid back persona had a very positive effect on me and the rest of the people around. Although I think it’s safe to say that 99% of the audience would have been fine without having an opener, I think it’s also safe to say that 99% of the audience didn’t hate Jagwar Twin’s set and left a fan of this up and coming musician.

After Jagwar Twin’s quick but effective opening set, it was time for the main attraction and you could feel that in the air. As the lights went down and the music video for Avril’s new single “Head Above Water” played on the giant screen at the back of the stage, the audience went wild. The little girl behind me kept bugging her mom, “Where is she? Is Avril up there? I can’t see! Is she up there yet?” I could literally feel that little girl’s excitement and it all came to a peak when the one and only Avril took the stage. Wearing a flowing white dress and looking quite angelic (which was quickly replaced by a more rocking outfit complete with leather looking leggings and a black t-shirt complete with winged sleeves that actually looked super cool), Avril kicked off her set with “Head Above Water”. Although not a huge fan of her new music, it was a stunning way to kick off what would be a set of fourteen songs full of nostalgia, sing-a-longs, and passion.

Obviously the highlights of her set for me were the songs from her 2002 album ‘Let Go’ including “Complicated” and, an all time favorite of mine, “Sk8er Boi”, but honestly it was the stark contrast between each song that kept me captivated. From slow, ballad-like tracks that showcased the fact that, after all of these years, Avril still has one of the best and most versatile voices in the industry, to the booty shaking songs including “Dumb Blonde” which was a song she did with Nicki Minaj, there wasn’t a single moment where I found myself wishing I was getting more from the stage. Although the mood from the music seemed to be a non-stop roller coaster, the amount of energy was not. Having taken five years off from touring, it was super refreshing to see that Avril hasn’t missed a single set and, although I never got to see her back in the day, I think it’s safe to say that she has only gotten better with time.

Although this was a seated show, there wasn’t a single butt in a chair as far as I could tell. I mean, how could you sit with such an amazing atmosphere swirling around you. Although a true megastar, Avril’s set seemed to be simple and kind of down to basics but, much like her energy, that was all refreshing and was honestly exactly what I wanted her set to be like. From sing-a-long songs where the audience (myself included) was left screaming along to words from years gone by, to moments of near silence as we all just listened to Avril spill her heart out on stage in the form of music, last night was a night of perfection.

Don’t worry about what people think about your taste in music. If you find a performer that speaks to you or has that one song that meant everything to you at one point in time, embrace it. My apologies to Avril Lavigne (or April LaviGney – hard ‘g’- as my dad used to say) for ever thinking I was “too cool” to admit to liking you. Avril is a gem and I’m truly honored to have been able to spend my Tuesday night with her.

Average Age of the Crowd- 30