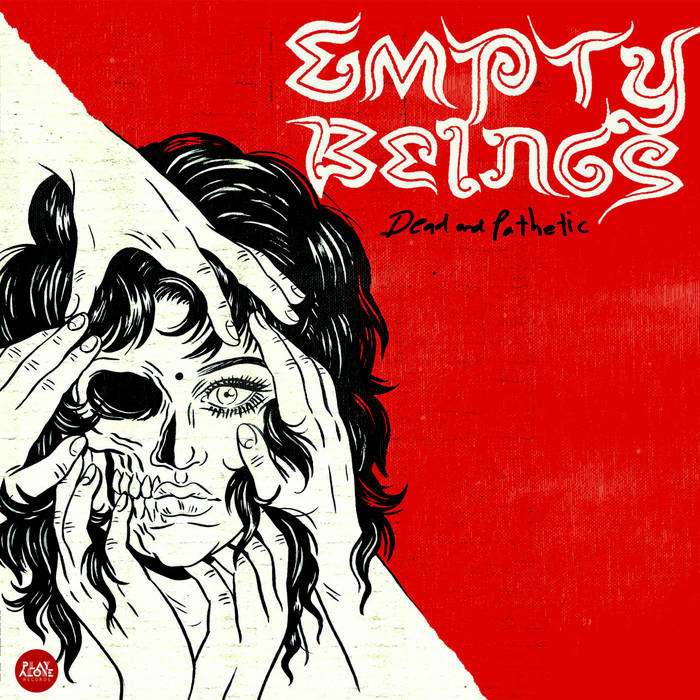 Today was a typical Sunday but I felt more motivated than usual. I got so much done around the house and even remembered to water my plants and make myself dinner. All of this adulting has me drained but I knew that all I needed to perk myself up for the rest of the evening was a new soundtrack. That’s where Empty Beings’ ‘Dead & Pathetic’ comes in.

The opening track on ‘Dead & Pathetic’ absolutely sets the tone for this twelve song album. It’s a little creepy, a little abrasive and full of more energy that many recorded albums are able to capture. “Blameless” draws you into a world that is completely different from where you actually are. I may be sitting at my desk right now but, as soon as the music hit my speakers, I was somewhere else. I can’t tell you where I am quite yet as we are only one song in but I’m excited to see where this journey takes me.

“Growing Boys” replaces the eeriness with a fast-paced almost surf punk guitar part that somehow makes the beat seem faster than it actually is. The vocals (provided by the amazingly talented Shani Banerjee) toy with you. They’re somehow seductive while being completely in your face and I realized about half way through this quick song that that is going to be the reason I fall in love with this act. “A Whole Ending” is a good example of what I mean by the seductive yet venomous of the vocals. The lyrics match this sentiment in the perfect way. They draw you in but, once you really start to dig into the words, you realize just how dark they really are.

Short songs are the name of the game when it comes to ‘Dead & Pathetic’ and, before I knew it, “Shot Down” was taking over my speakers. Empty Beings’ distinctive blend of post-punk and something a little darker had taken me to a deserted forest. Dramatic? Absolutely, but that’s the kind of sound this band has. There are moments of pure terror and fear that quickly move to an adrenaline rush of sound. All of that comes wrapped up in a bow of stunning energy that makes you feel the music, not just hear it. “Shot Down” became a favorite of mine just due to the imagery it provided in my mind without even really trying. Like I said at the beginning, I wasn’t quite sure where this album was going to take me but I was excited to see and this track was the apex of that excitement.

“Better Way ” brings a more sensitive sound to the band. Although the vocals are clearly those of Empty Beings, the words seem to slide by instead of being sung with a sense of anger and aggression. Don’t get me wrong though, there’s still a stunning amount of energy in this track. It’s just a different kind of energy that fits perfectly with the previous songs. Just when I was getting used to this new style, “Hex” speeds things back up and takes it a step further. Pure fury but never creeping towards that edge of chaos, this song is powerful, driven, and, well, powerful. Although things are fast and furious, the words just kind of dance above the instrumentation at their own pace almost like a spoken word style but not quite. This bizarre yet perfect difference between vocals and instrumentation made this quick minute and a half song another one of my favorites.

Seventh up is “Culture Shock” and, although only a minute and a half, this song was another stand out track. The entire song is sung in Bengali which made me want to dig into the members of this band a bit more. Sadly, there doesn’t seem to be much info on them out there but this song definitely left me intrigued and had me trying to Google translate the few words I could distinguish.

Although all of the songs are short, “Fuzzy Tongue” is the shortest at just over a minute long. The lyrics have an almost Riot Grrrl feel to them while the music stays very true to the distinct personality of Empty Beings. The sudden ending of this song caught me off guard but I was excited as “In Between” took over. This track brings back that almost surf-rock guitar style in the background as Shani’s voice takes over with that odd almost sultry yet aggressive sound that I still, nine songs in, can’t quite put my finger on.

Just when you think you’ve heard it all from Empty Beings, “Absolution” begins to play and you pick up on the old school punk influence that has clearly been there throughout the previous songs but really seems to take the forefront on this track. There’s nothing more that really needs to be said about this track. It’s old school punk with Empty Beings’ signature post-punk sound added to it. Pure perfection. That old school punk vibe continues to reign supreme as the album moves onto “33(Dark)” while also adding in this odd new-wave vibe that, again, is heard throughout the album but never really comes to the forefront. A back and forth between English and German (at least I think it’s German?) just continues to show how truly amazing this band is. Different languages and different styles all come together with ease when it comes to Empty Beings and that is an absolutely stunning thing.

Closing out this quick but amazing twelve song album is “Adore” that starts off with a sound that gave me big The Kills vibes before settling back into the sound that only Empty Beings can produce. Although this track caps off this album perfectly, it also doesn’t. It doesn’t really bring much closure but more makes you want to go back and travel through this album a few more times before calling it quits.

I was almost ready to crawl into bed with a book before I put this album on but Empty Beings gave me the final push I needed to finish off my day in a productive way. The power and energy that is conveyed throughout this album is stunning and the band’s distinct style is something that nobody could ever recreate. What a great release from a great band.

What My Cats Thought Of It: Both cats were nowhere to be found (Probably sleeping upstairs because I had the dreaded vacuum out earlier)

Check out some other amazing releases from Play Alone Records HERE!