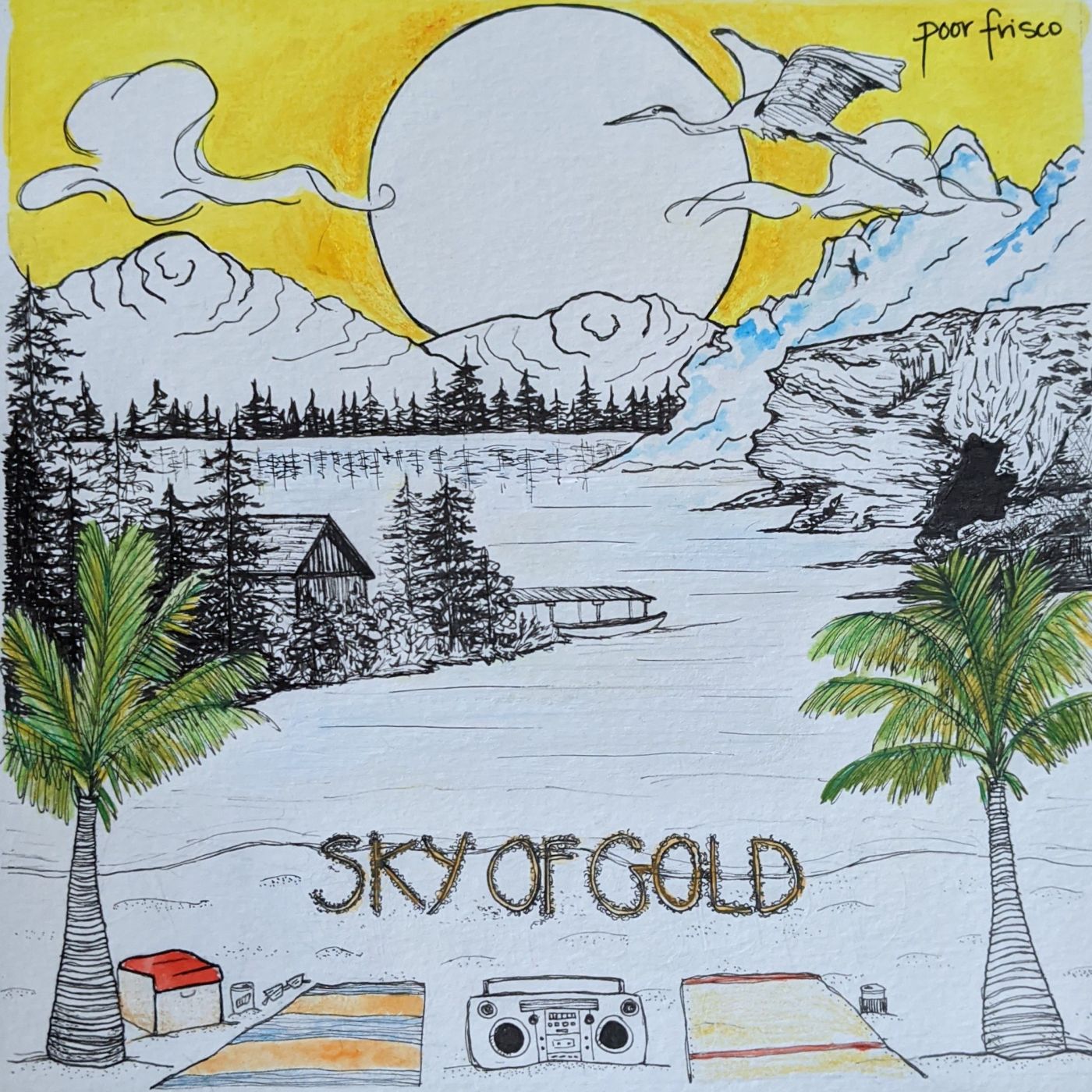 The one track I heard from Poor Frisco had me intrigued. Although I liked it for the fun little bop of a track it was, I wanted to hear more. Luckily, Poor Frisco’s album ‘Sky of Gold’ had literally just dropped so let’s dive into this one a bit tonight!

“Cape Frost” is the first track on this seven-track album and it also happens to be the track I had heard previously. Just as I remembered, this track was a super fun bop with an infectious beat and a bunch of elements that I would love to see expanded on. I honestly don’t know why I was so hesitant the first time I heard this track because tonight while listening to it, I was falling head over heels for Poor Frisco with every note that rang through my house.

“(who you are)” is just a quick, twenty-eight-second track of someone talking about a new job and, although brief, and I honestly don’t know the context of the conversation, it really feels raw and, although painfully short, really makes you think. I won’t give away the conversation but I will say it sets a tone for this album that I appreciated so I went into “Golden Boy” bright-eyed and bushy-tailed looking for references back to the conversation heard during “(who you are)”. Although I didn’t hear any references that related back, I did hear a super calming, yet energetic sound that came over me like salty spray from the ocean. There’s something bright and the sun shining about the sound of Poor Frisco and this song is no exception. Again, an infectious beat had me falling more and more in love with every note of this track.

There’s a darkness in “Context” that I just couldn’t get enough of it. Although the beat is still infectious and the song remains in that indie-pop vein that Poor Frisco has situated themselves in so perfectly, there’s a darkness and a deepness that not only comes with the lyrics but with the overall vibe of this track. There’s a driving force in the drums that seems unlike the more boppy drum style heard in the previous track and the vocals have a darker tone to them. I like this raw emotion and how it really takes over for this track while still staying clearly Poor Frisco.

“Sky and the Beast” kicks off with more of the conversation heard in “(who you are)” and although I still wish I could just hear the conversation to get the full context, I really like how this theme keeps popping in and out of this album as if really helping to tell the story of this music and the musicians. After this quick conversational opening, “Sky and the Beast” turns into another care-free bop with a sound that only Poor Frisco can do. Honestly, the words are a bit darker than the instrumentation may lead onto but I’m always a fan of music like that.

“(sun shower)” is another quick forty-one-second conversation. It seems to talk about remembering things from childhoods which could either be foreshadowing the final track or just be more of the continued conversations heard throughout this album. Regardless, it really does bring a personal aspect to this album that, although it took some thinking to really grow on me, ended up being something that really sets the scene for not only this album but also Poor Frisco as a band. This album comes off as coming from an accessible band who could be your friends from high school or your college buddies. It just has a fun feeling and a laidback vibe of a band who is damn good but doesn’t take themselves too seriously and I feel like these little breaks of conversations throughout the album just magnify that sentiment.

Closing out ‘Sky of Gold’ is the anthemic track, “Hearts of Tidewater”. Much like “Cape Frost”, this track has a boppy and infectious indie-pop undertone to it while the vocals dance over the instrumentation in a very carefree way. I don’t know how else to explain their sound other than bright and sun-drenched which probably makes no sense to you but, promise me, if you listen to them, you will hear it and it will make sense.

I don’t know why I was so unsold on this band the first time I heard “Cape Frost”. It just goes to show you that certain music can hit you in certain ways depending on the timing and your mood. Poor Frisco hit me just right tonight and they are a band that will not be leaving my daily playlist for the foreseeable future.

For Fans Of: Sun-Drenched Indie-Pop Music; Accessible and Friendly Vibes

What My Cats Thought Of It: Artie laid right next to my desk; Autumn slept upstairs

Check out ‘Sky of Gold’ HERE!