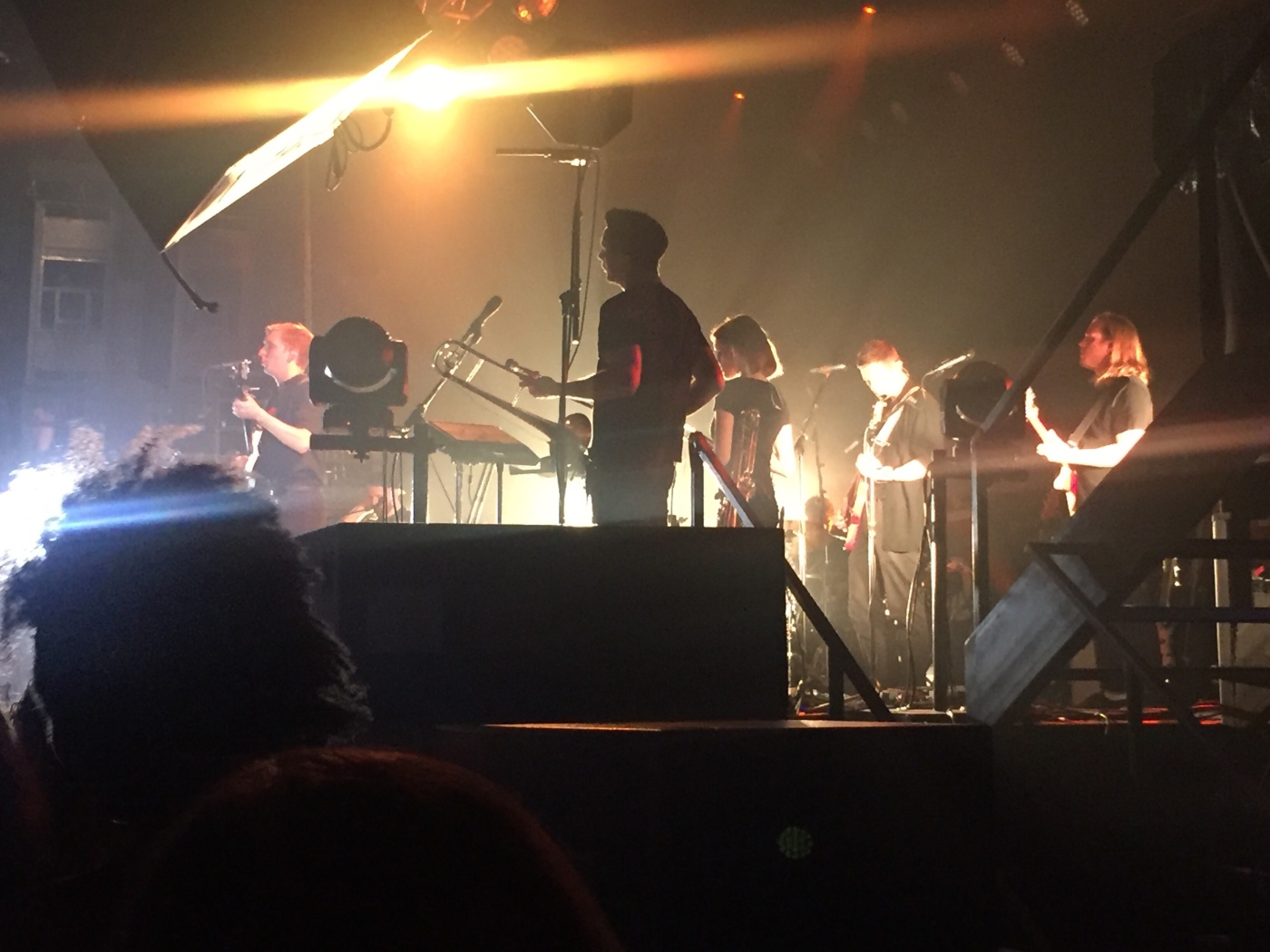 The line to get into First Avenue last night was long. I’m used to sold out shows and I’ve become a pro at timing. Even at a sold out show, I seem to always time my arrival perfectly with a lull in the line. That was not the case last night and my anxiety skyrocketed as I heard the opening act kicking off without me inside the venue. That being said, it was beautiful out and when I finally reached the doors and security, I was a bit disappointed that I had to leave the warm and sunny weather. Thankfully, both acts that performed last night were good enough to make me forget about the beautiful weather and perfect patio drinking weather I was missing out on.

Noah Kahan kicked the night off right and, even though I could only hear him through a brick wall for his first song, I was in love. Once I got into the venue and to a spot where I could see the stage, I was even more in love. Noah had a charm about him that was instantly noticeable. His sweet smile matched his smooth voice in the most perfect way. Hailing from the tiny town of Strafford, Vermont, Noah had a very small town vibe about him. Not quite sure how else to explain that but he just came off as very humble almost to the point of being shy while still knowing that he still deserves the spotlight that shined on him throughout his quick thirty minute set. Maybe it was the way he took the time to introduce each of his band members or maybe it was the way his lyrics and the way he sang them easily gave me chills, but there was something so genuine about this guy that it was almost sickening (in the best way possible of course).

“I hope you had enough good in your day to balance out the sad that we are about to give you!” he joked after the first song. As funny as that statement was, it was true. His music had an undeniable sense of heartbreak in it but, because he performed with such a sense of conviction, it was presented as something beautiful. Although his music was much calmed than what I typically listen to, there was something about it that had me turning it on as soon as I got home from the show. There were moments of intensity and power that popped out of this sea of beauty and calmness that instantly snagged the attention of the sold out crowd even though it was clear who the crowd was there to see (and no, it wasn’t Noah). I can try and be tough and say that Noah’s set was putting me to sleep and, as a (mostly) metal head, I just don’t get it but that would be a complete lie. Everything about Noah’s set was beautiful and I honestly can’t wait to catch him live again.

After a somewhat lengthy stage change over that seemed to just make the already palpable anticipation in the air become more and more intense with each passing moment, George Ezra and his impressive band took the stage. Does the name George Ezra not ring a bell? I’m honestly not surprised. The only reason I knew the name prior to last night’s show was because I heard a song on the radio that instantly had me hooked and I watched as his name scrolled across the display in my car (at a red light, of course). Even thought he’s only 24 years old (yeah, we will discuss that later on), George has truly made a name for himself. His 2014 song ‘Budapest’ catapulted him into the spotlight and, after spending a couple of years touring and recording, it seems he has done it again with his new single ‘Don’t Matter Now’.

George’s voice is what drew me into his music. I remember hearing ‘Budapest’ as I was flipping through radio stations while stuck in traffic. It was on my least favorite radio station in the cities but George’s voice made me stop everything and listen. I had a picture in my mind of what this dude would look like. The amount of soul and power behind his voice had me seeing a stocky older man with a couple of years on him and a lengthy career that, for some reason, just caught on. When I got home and looked him up, I was left with this picture of a scrawny little dude from England with only one album and really no history. I was honestly shocked but, at the same time, absolutely loved it. I loved how his voice didn’t fit his look and how his sound didn’t fit his age.

Not only does his voice not match his look, but his dark, low, and sultry voice doesn’t really match the poppy instrumentation of the band that stood behind him but, again, I liked the juxtaposition of the two. It gives George a sound unlike anything I have ever heard and, even though he’s definitely categorized in the world of top-40 pop music, he’s definitely so much more than that. All 16 songs that George and his backing band played through was so unapologetically ‘George Ezra’. From the opening song, ‘Cassy O” and until the final note of his closing song ‘Budapest’ (go figure he played it last), there was a sense of talent yet a sense of uniqueness that radiated off the stage. Sure, based on the crowd of middle aged women who were swooning at George, I was clearly at a top-40 show but it sure didn’t sound like it (other than the screeching females).

George and his band played song after song as the audience sang along. Honestly, at points, the audience seemed to power over George’s already powerful voice which was truly impressive. Although not rowdy, the crowd never seemed to stay still and bobbed and bounced their way through the mostly upbeat set. It felt like even the more ballad-like songs had an electric energy about them as the group played them giving the audience no real chance to just stand still. The great music mixed with the charming stories from George added up to be a truly genuine and fun night.

Not only did I get to hear ‘Don’t Matter Now’ (which is definitely one of my favorite songs with now), but I got to see this little 24 year old kid completely blow the roof off of First Avenue. I’ve seen a lot of impressive things at shows but George Ezra may have taken the cake.