Let Me Have This Dance With You 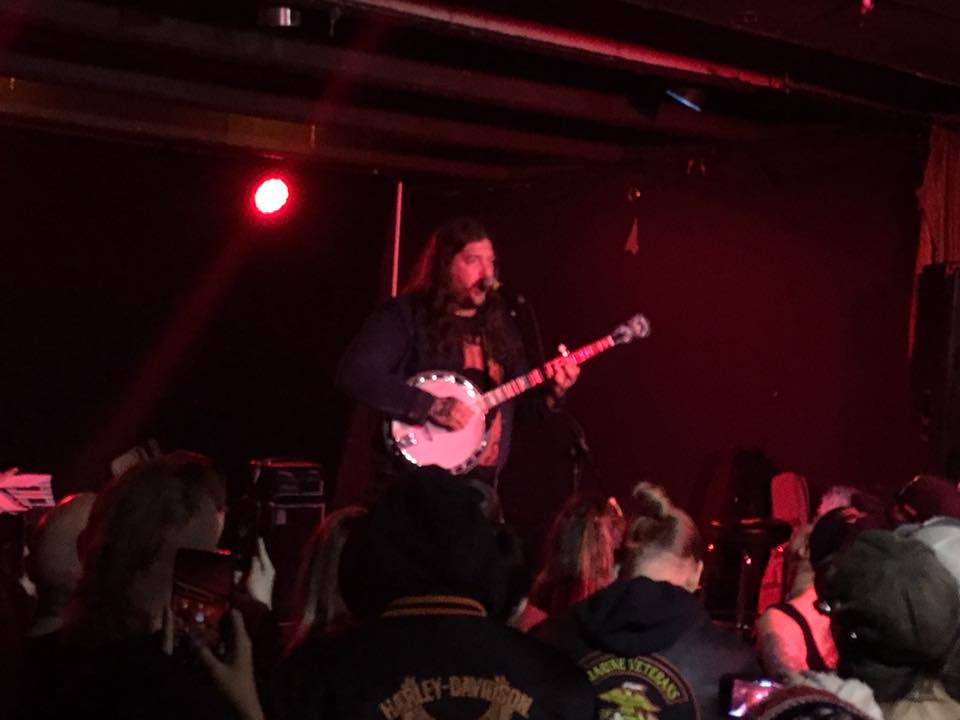 When describing musical acts like the ones I saw last night, I typically get some weird faces. I stumble through words like punk, bluegrass, alt-country, crusty, and a couple of more until I just take a deep breath and end with “It’s fun music”. The truth is, after going to many shows in whatever genre last night is classified as and having listened to it for years, I still can’t find the correct words to describe it but “fun” is the one word that always comes to mind and last night was no different.

After a quick drink with a friend I hadn’t seen in awhile (why do I feel like all of my posts start with “a quick drink”? Sorry mom and dad!), we made our way down the block to Studio B at the Skyway Theatre. Although Studio B is dwarfed by the giant room that is Skyway Theatre, there was an undeniable sense of energy that hit me as I walked through the giant double doors and into the small space. Music had already started and it was clear that I wasn’t the only one who was already a drink or two in. With people dancing and the upbeat music ringing through the air, I was instantly in love with everything about the Wednesday night show.

Kicking the night off was the one and only Harley Poe. Although I may still be fairly new to the scene, Harley Poe is one of those names that always comes up in conversations about this rare breed of music. Hailing from Indiana, Harley Poe’s brand of whatever the hell you want to classify the music as is nothing short of influential. It had clearly been awhile since the four piece has stopped by the Twin Cities. The audience was having the time of their life and were singing along to every single word of every single song while taking part in a small push-pit that had formed directly in front of the modest stage.

Smiles seemed to be the outfit of choice for everyone involved last night and for good reason. There’s just something about watching this band that puts a smile on your face. Maybe it’s watching the washboard player (my apologies but I can not find her name online to save my life) as she goes to town on the washboard creating some of the most amusing sounds and beats which easily takes over the role of drumset. Maybe it’s the amusement you get when watching the melodica player switch between melodica to the bell set and back to the melodica. Maybe it’s the charm that’s hidden in frontman Joe Whiteford’s smile. Regardless, as I mentioned before, this show was the type of show where you just found yourself to be happy. Completely and utterly happy for no apparent reason other than being more than content about where you were with who you were with.

I could have stood there and watched Harley Poe play for hours on end but sadly it was done after about an hour. Although bummed, I was super excited to see what would come next. Much like Harley Poe, I’ve been listening to Amigo the Devil for awhile now but have never been able to catch him live. To be completely honest. I had never even looked up a picture of the man that is Amigo the Devil. His voice said it all and as soon as he took the stage, it all made sense. The larger than life voice had a larger than life man behind it. Okay, maybe I’m being a bit dramatic about his stature but there was something so dramatic about the way he took the stage, grabbed the microphone, and instantly started serenading the crowd into a tizzy.

A fascination with the dark world of serial killers, Amigo the Devil’s music has a very dark vibe while keeping the energy bar that Harley Poe set flying high. His witty banter between songs between himself and the audience was nothing short of charming. There was this seamless transition for everyone in the audience from laughing at his jokes to singing along to his songs. With brutally honest lyrics, it’s impossible not to fall in love with something about Amigo the Devil. Be it the music, the lyrics, or the witty banter, there’s something for everyone when it comes to this guy. If you watched his set and stayed straight faced and bored throughout the entire thing then there is something very wrong with you.

Being a one man act following a band complete with a washboard would not be an easy feat for many musicians but Amigo the Devil made it look so easy. He may have been just one man on stage with a guitar and a microphone but his sound was so large and robust that it didn’t seem to matter. Again, with a unique blend of punk, blues, bluegrass and rock all tied up with an almost operatic style that many vocalists would kill for, there’s no point in trying to put Amigo the Devil’s music into a genre box. Like Harley Poe, the only way I can describe the music is”fun” albeit a darker vibe of fun with a bit more blatant sensitivity, it was still fun and I was left standing there pleading with the concert Gods for more even when it was all said and done.

Call it folk, call it punky bluegrass, call it whatever you want– if you weren’t at the show last night you definitely missed out.

Outfit of Choice For The Crowd- Smiles and Patches