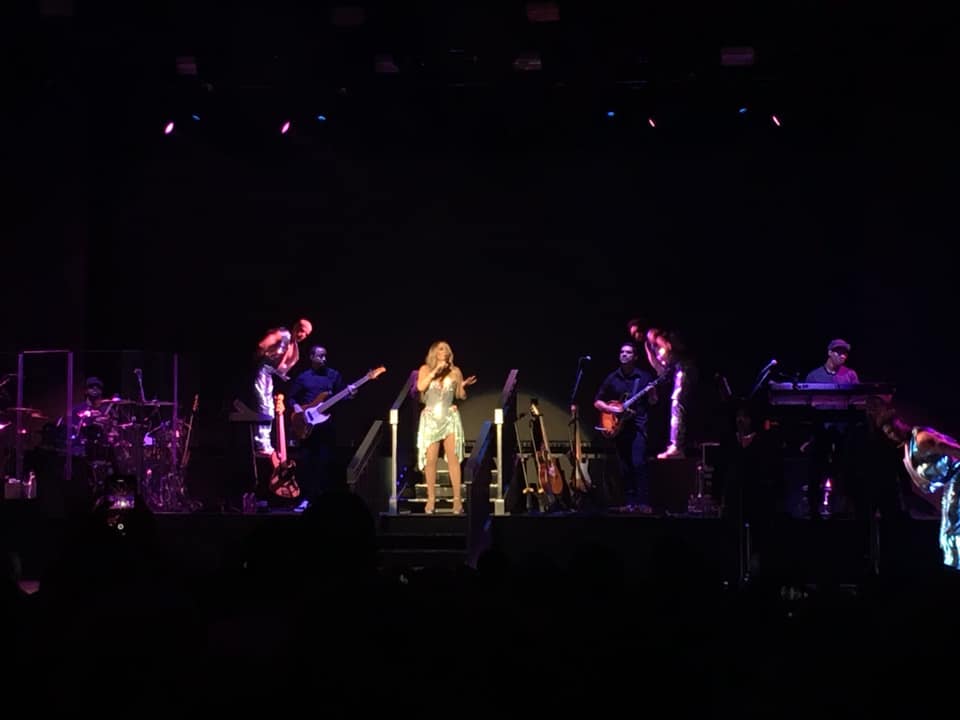 I get a million amazing opportunities. From covering legends that I have been worshiping for years to covering the hottest new acts out there. I am truly a very, very lucky gal. One of those amazing opportunities came last night. I never thought I would have to decide between covering Michelle Obama’s book tour or Mariah Carey at an intimate show but, there I was making that decision. Seeing Michelle Obama would have definitely been amazing and nothing short of inspirational but writing a blog about it would be rough and honestly the chances of my getting approved to cover it were slim to none. Mariah Carey may be the butt end of many jokes but she’s got pipes and a live show that I’ve never seen. Add the fact that the chances of me getting that were low but higher than Michelle Obama, well, I went with Mariah Carey. I was shocked when I got the e-mail saying I was going to be seeing Mariah Carey and relieved when I saw that we (meaning the other blog I write for and the amazing people over there) were denied for Michelle Obama. Honestly, after yet another slip on the ice (this time using my head as a cushion leading to day full of headaches and pain) and the death of my microwave which I use far too much, maybe a little glitz and glamour was just what I needed.

The crowd really didn’t need anything to get prepped for Mariah Carey. It was quite clear they were already ready. There was an electric feeling of energy in the nearly sold out (there was maybe one open seat) State Theatre on Wednesday night. I would usually make mention of a young crowd or older crowd when setting the scene for you but, the truth is, I just can’t for this show. Seriously it was people of all ages, all walks of life, all different but all coming together for the love of the music. Even though everyone was clearly ready, DJ Suss One (one of Mariah Carey’s DJ’s apparently) took the stage and started cranking out hits that, like the audience, spanned generations. Constantly asking the audience to put their hands up for various things, I quickly found myself annoyed with his act and wished he would just let the infectious songs play. From Michael Jackson to Aretha Franklin to the obligatory Prince song, DJ Suss One’s mix was on point but, again, you only got a taste of each song before he grabbed the microphone and starting asking who remembers the 80’s, 90’s and 70’s (yes, in that order which I found odd). But I digress. I may have been annoyed but this guy got people warming up and in just a quick twenty five minutes (although every three minutes he would state that Mariah was coming out in just minutes) it was over and people went back to anxiously awaiting the legendary songstress.

Full disclosure, I own no Mariah Carey albums. I honestly didn’t even know that she was still making music and was still a thing but that didn’t stop me from sharing the excitement of those around me. When the lights went down the audience instantly erupted into a deafening roar of applause and cheering and, let’s be honest, I was right there with them. Before I even got a glimpse of the legend, I was in love with the show. The way that the sheer sheet concealing the stage didn’t just drop to the ground but made a fall to the ground before sweeping up and disappearing into the ceiling said it all. This show was going to be over the top, glamorous, and absolutely perfect and I was ready.

Just like that Mariah was standing center stage in a glittered dress and a microphone in hand. She wasted no time and instantly jumped into her opening track “A No No”. Although there were seats for everyone in the audience, there were no butts in said seats. Everyone was on their feet dancing and singing along to every single word. Although my body was aching from my nasty fall earlier in the day, I remained on my feet with the rest of the audience throughout Mariah’s extensive seventeen song set and then the two song encore. Last night’s show may have been part of a tour promoting Mariah’s newest album ‘Caution’ but she did a great job of playing songs that spanned her impressive career. From new to old, every song had a different vibe while keeping with the overall glitz and glamour of the night (including a ‘diva moment’ when Mariah’s hair and make-up guys came to the stage to touch her up before jumping into another song).

Yes, last night was over the top, from the ‘diva moment’ to the outfit changes (each of which resulted in more glitter than the last) and the incredible dancers, last night was definitely a production but seemed pretty understated for someone like Mariah Carey. Sure, the glitz and glam was entertaining but it was Mariah’s voice that stole the spotlight. I’ve always wondered if she can actually sing as we’ve all heard the horror stories about her getting caught in the lip-sync scandals that many seem to fall into. Well, she can definitely sing. My jaw was on the ground for the entire performance. From her sultry dark voice to the dog whistle like high notes, Mariah Carey definitely proved that there’s a reason she is still around and proved to someone like me that you can’t just listen to the press and reviewers. Some things you just have to see for yourself and I am beyond grateful that I had a chance to see Mariah Carey for myself.

Last night was not just my first time seeing Mariah Carey– it was also apparently her first stop in Minneapolis ever which made last night even more special. I take back any bad word I even said about Mariah Carey. She nailed it last night and I feel beyond lucky having had the opportunity to experience it.