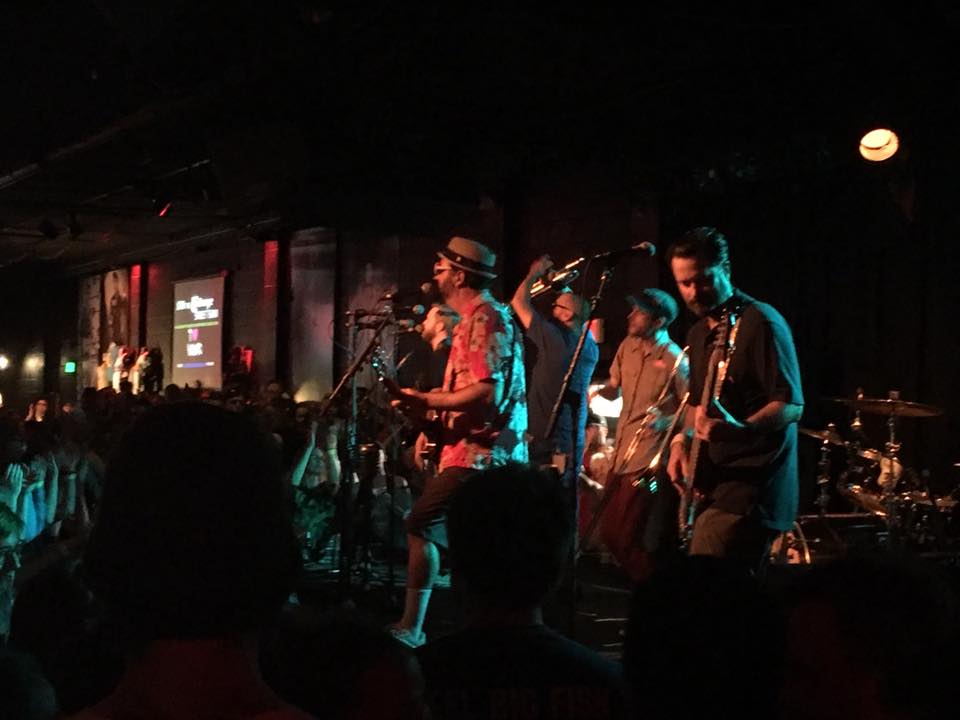 I have so much to do before I head out of town again for another festival. Laundry, vacuum, dishes… you name it, I have to do it before I head out to Wisconsin on Wednesday. Last night would have been the perfect night to get it all done. There was a pretty nasty storm hitting the Twin Cities making it the perfect night to just stay in, get some stuff done, and spend some time with my cats who probably don’t even know who I am anymore. All the things I should have been doing would have to wait. Reel Big Fish was in town with The Aquabats and I wasn’t going to miss it. I ignored my dirty floors and the dishes piling up in my sink on my way out of the apartment and made my way through the storm to The Cabooze.

Due to the weather and lack of parking (or more so the abundance of minivans), I was soaked and late when I finally got inside of the venue. Normally this wouldn’t bug me but I was instantly a bit bummed as I walked through the crowd to my normal spot while listening to the sweet sound of Dog Party. The only band I had never heard of on the bill, I didn’t know what to expect but I instantly fell in love with every note this duo was giving me. This California duo had an almost surf punk sound to them but also had a very light-hearted vibe that was easily felt throughout the sold out audience. Gwendolyn and Lucy Giles (sisters) had a way about them that commanded your attention without ever asking for it. I’m super bummed I missed any time of their set but am so thankful to have caught what I did. It gives me something to look forward to for the next time they come to the Twin Cities.

Things moved quickly which was a good thing because there were a bunch of little kids (and I mean little) that probably didn’t have much patience for a long changeover. Before I knew it, the almighty Aquabats were taking the stage to shrieking kids and adults alike. The Aquabats are one of those bands that you just have to see live. From the superhero costumes to their silly banter and all of the catchy songs in-between, they are definitely in my top twenty bands to catch live (and that’s saying something). I’ve only caught these guys at outdoor festivals before so I was interested to see how they could fit their explosive show in a venue as modest as The Cabooze. They did it flawlessly. They didn’t sacrifice a single ounce of energy or refrain from throwing inflatables into the crowd. They even did their signature move of having a kid ride an inflatable piece of pizza through the crowd.

Although the band sounded great and seemed to know just what songs the audience wanted to hear, it was the way they interacted with the younger kids in the audience that was the true highlight. They are definitely one of those acts that has a pretty rowdy audience due to the sheer amount of fun and energy that radiates as they perform but they also appeal to a very young demographic. I’m not typically one for young children (they seem to look at my face and all of the metal in it and think, ah, jungle gym) but it was adorable to watch as the moshing adults were very cautious around the children and as parents let their kids go up on stage for one final song with the band. To the adults in the audience, The Aquabats seem just like some dad bods in spandex with quirky songs that make you want to dance but to the kids, these guys are true superheros and that always makes for an amazing atmosphere at their shows.

Honestly the show could have been done after The Aquabats and I would have been more than satisfied but we still had one more legendary act to go. The kids that had taken over the front of the audience for The Aquabats seemed to have disappeared and been replaced by excited adults who were ready to dance their butts off to the one and only Reel Big Fish. As soon as the music started, the crowd erupted into a sweaty mess that can only be smelled and felt, not put into words. It was hit after hit when it came to Reel Big Fish’s set list. From hits that helped catapult this band to the top of the ska scene to songs that everyone loves but never really hit it big, every track was a sing-a-long and there wasn’t a single word missed by majority of the audience.

It may have been a Monday night and all ages show that was done by 9:30PM but that didn’t stop the audience from treating it like a downright party. A few crowd surfers here and a bunch of drunken there, I loved how no matter why you were at the show last night, you were having a good time. Even if you had never heard of the bands before (although hasn’t everyone heard Reel Big Fish’s flawless cover of “Take On Me” at this point?), there was a smile on your face, sweat rolling down your back, and a need to dance it out. It feels a bit like a cop out when I say this but this was definitely one of those shows that my words will never be able to describe. You had to be there, you had to feel the sweat, the love, the energy… yeah, you just had to be there.

I’m nowhere near ready for my trip to RockUSA in Wisconsin tomorrow but honestly, who cares. Last night was so much fun and exactly what my mental health needed. It was honestly perfection.

Average Age of the Crowd- 34

Spotted Flying Through The Air- Inflatables