Death Comes With The Tide 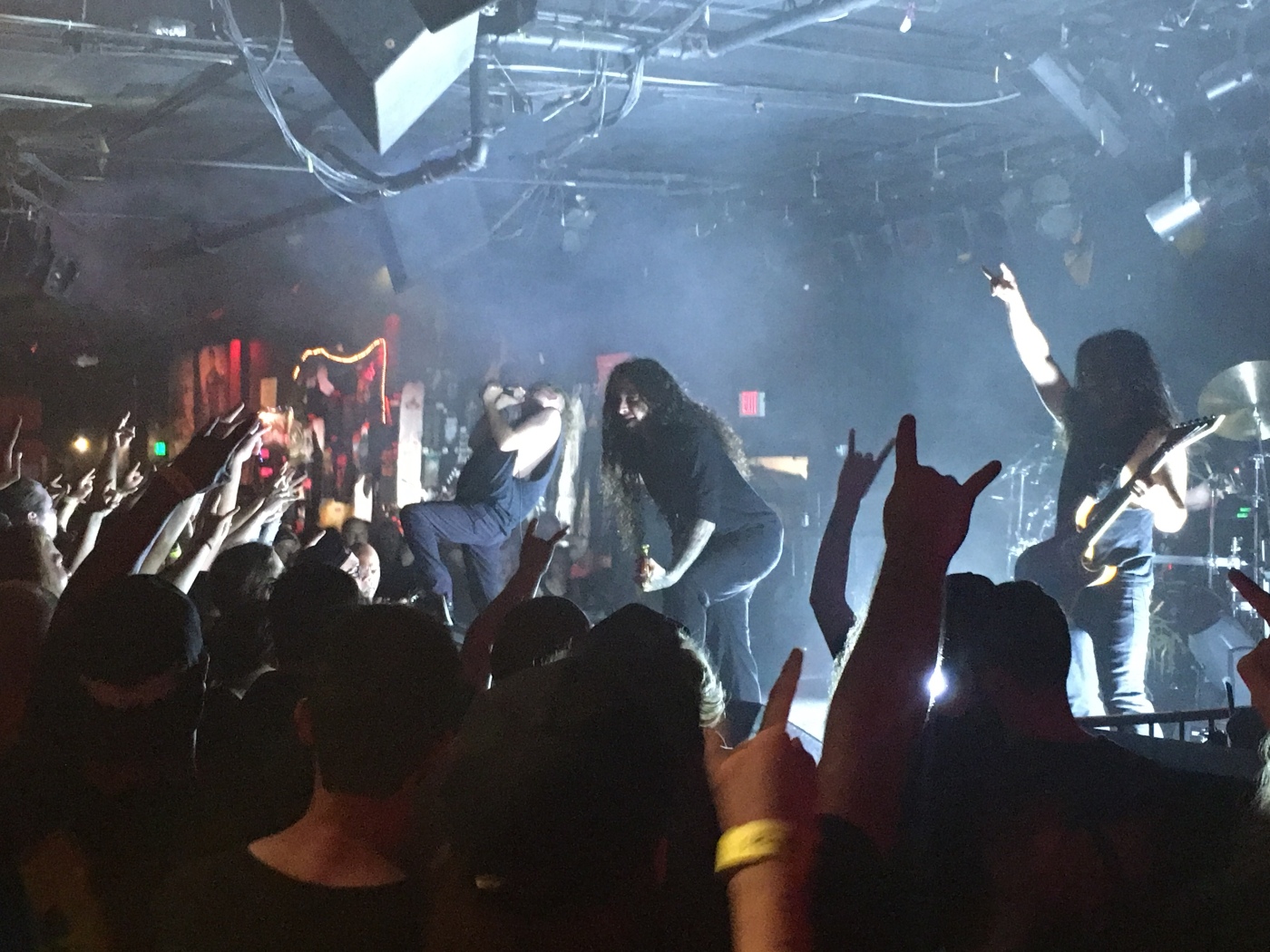 Last night was one of those shows that majority of the metal scene looks forward to every year. The inevitable and always insane Summer Slaughter Tour hit the Cabooze with a sense of force that it has never had before. Don’t get me wrong, the bands are always amazing and the feeling of family strong, but there was something in the air last night between all fifteen bands that took the two stages (one inside and one outside) and the rowdy yet appreciative crowd that gave this year’s show a new and amazing feeling. I may have been running on fumes by the time the night finally wrapped up but it was another one of those nights where, no matter how exhausted I was, it was absolutely perfect and I wouldn’t trade that exhaustion for anything.

As always, with fifteen groups on the bill, there was no way you would read a paragraph for every single band so I’ll keep it to the bands that really stuck out to me. I want to make it clear that absolutely everyone who performed yesterday on either stage absolutely killed it.

A little late due to the traffic and the whole adulting with a day job thing, I was surprised as I pulled up to The Cabooze and realized just how many people were already there. It was a pleasant surprise because that meant people cared about more than just the headliners but also one of those dammit moments where all I could do was think about how I should have just left work early as to not miss anything. Thankfully, I didn’t miss much and walked into the dark venue in time to catch Canadian group Brand of Sacrifice. I knew within the first song that this was already going to be one of my favorite groups of the day. Their sound was clean and intense and their influences clearly spanned the board from hardcore to death metal. It may have been early in the day but the crowd was already eating up every word and moving to the music with a sense of chaos and fury that would reign supreme throughout the rest of the lengthy afternoon/night.

Lorna Shore took the stage inside just before 5:30 and, even with a new singer, left me impressed beyond belief. I don’t listen to much heavy music outside of the show I go to (long story short– I love the feeling you get at a metal show but I’m just not angry anymore and tend to listen to happier/poppier music at home) but Lorna Shore is one of those bands that I will always pop on if only for a song or two. I was worried that after the departure of vocalist Tom Barber, the band wouldn’t be able to recover but new vocalist CJ McCreery definitely put that fear to rest. The energy was intense and the music was even crazier. Again, although it was early, these guys had stolen my heart and between Brand of Sacrifice and Lorna Shore’s sets, I was already satisfied with how my night had gone.

What needs to be said about Nekrogoblikon? I mean, come on, they have a guy dressed up in a creepy goblin costume that does nothing more than jump around and they have a song about how their band needs a gimmick. Definitely the comedic relief of the day that we all needed, Nekrogoblikon does a great job of having loads of fun while still being an uniquely talented group with a sound all their own.

One of the best things about yesterday’s show was the fact that you were able to catch a little bit of every band performing if you wanted. The staggered set times made it easy to catch a couple of songs from the talented locals playing outside before making your way inside to catch the insane nationals taking the stage inside. Every single local act that took the makeshift stage outside has what it takes to be one of the nationally touring acts. There’s such a level of passion, love, and talent with the metal bands here in the Twin Cities that, although I say it every time I write about the scene, I’d be remiss to not mention it, we truly do have the best scene in the country. Again, I can’t write about everyone that performed but a couple of honorable mentions-

Common Choir has always been a solid band but yesterday was my first chance seeing them with their new drummer Tony Lendt (formerly of Cymothoa). Tony brings an edge to this band that definitely pushes them over the edge and their set was perfection even with some technical difficulties. Do I even need to praise Agony Reigns anymore? This young-enough-to-be-my-children band always leaves me stunned and yesterday was no different. Now that a couple of them have graduated from high school (yes, high school) I truly can’t wait to see what the future holds for the trashy band. King of Tyrus is all the buzz in the local scene right now and I realized why that is. Their sound was definitely unique with a very distinct and interesting vocal style that had the audience outside going wild as if they were watching a national band.

A clear favorite of the day was California based Carnifex. It seems like these guys are constantly on the grind and touring which means they seem to be here often but that’s definitely not a complaint. Their live shows are always insane from the crystal clear guitar work to their intense light shows that leave you blind or seeing dots for at least an hour after. With what looked like the biggest crowd of the day, Carnifex gave fans everything they had for nearly an hour and never lost their sense of energy.

Closing out the entire night on the indoor stage was the almighty Cattle Decapitation. Formed in 1996, Cattle Decapitation is one of those legendary bands that I am truly honored to have been able to catch multiple times now. Their live show never disappoints and their sound seemed cleaner last night than it has in the past. Vocalist Travis Ryan has been with the group since 1997 and it’s crazy to think that he still has as intense of a voice as he did at the start. Some of the members may have changed with this group but the intense and chaotic vibe they bring to the stage has never changed and I truly hope it stays that way.

Whether you only stayed inside and watched the national acts on this impressive line-up or spent majority of your day outside watching the amazing talented groups we have here in the Twin Cities, a good time was had by all. It may have been a long night was it was a great one and I’m already looking forward to next year’s Summer Slaughter Tour.

Spotted Flying Through The Air- Bodies

Celebrity Sightings- Nathanael of Promidal; Dustin of By The Thousands

2 thoughts on “Death Comes With The Tide”