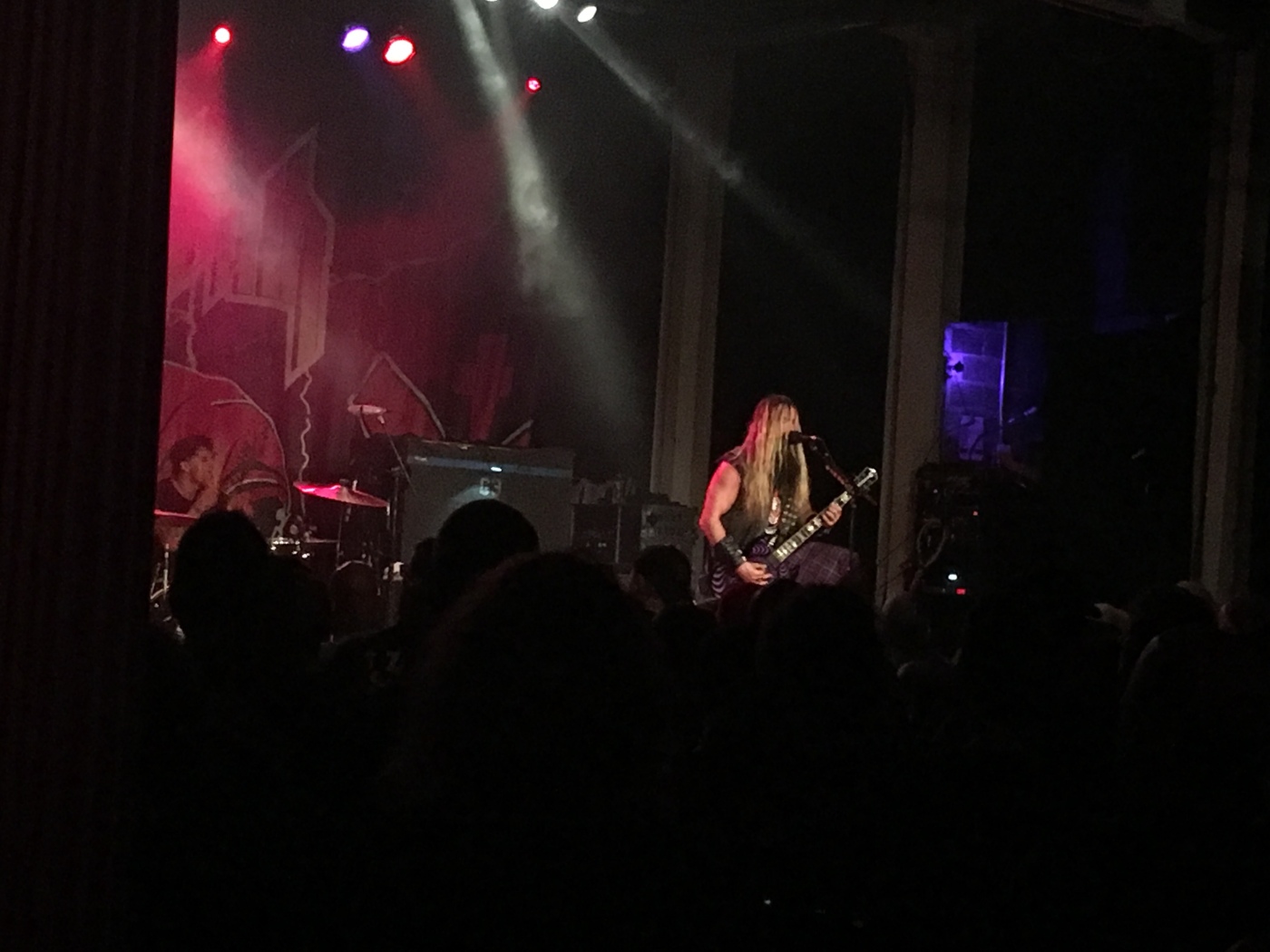 There was a true legend in town last night. Were you there? Did you see him? Sometimes it’s not about going to shows where you know every word or know every riff. It’s okay to go to a show just because you want to see a legend in the flesh and when you go to those shows you are often reminded that those legends are people that put their pants on one leg at a time like you do. Sure, that’s cliche but it’s something that I think gets lost in the mix and being able to see a legend up close and see that he really is just a person who was able to harness his talent and someone who worked his butt off to get to where he’s at today is truly a humbling experience.

Comedian and metal head Don Jamieson kicked off the Tuesday night show. I was honestly going to be snarky and just copy/paste what I wrote about Don when I caught him in April with Anvil because his shtick really didn’t change but, after sleeping on it, I get it. Jokes don’t just grow on trees and jokes that stick well with an older metalhead crowd are even more rare. How could I expect this man to write all new material in just a couple of months when there are bands that I have seen perform years apart and they still play the same exact set. Beyond that, his jokes are still funny and I think that says everything about a comedian. If you can see the same set, hear the same jokes and still laugh then maybe being harsh on the man isn’t quite the right choice. Much like when I was introduced to Don’s politically incorrect brand of comedy at the Anvil show, he came off like a friend, a drinking buddy, instead of the guy that hosted That Metal Show on VH1 Classics. It’s always weird to be at a show and have the opener not be a musician but the idea is growing on me. It keeps the night moving and, let’s be honest, who doesn’t love to laugh.

After forty-five minutes of anticipation as the stage was changed over after Don’s quick set, it was time for the one and only Zakk Sabbath to take the stage. You could feel the anticipation in the room. At the end of every song that rang through the speakers between the sets, the audience would start cheering in hopes of the end of a song being a sign that the headliner would be jumping on stage next. That sense of anticipation is something that can only be felt when you’re in the presence of a true idol. Sure, there’s always anticipation and an excited feeling that overcomes you when waiting for a headliner to take the stage but it’s so much more magnified when you know you’re about to see a performer who truly changed the face of music as we know it.

As soon as the trio took the stage the audience was whisked into a world where Black Sabbath is king. Not familiar with Zakk Sabbath? Well, I bet you are. Zakk Sabbath is Zakk Wylde’s project and you know damn well who Zakk Wylde is. Frontman of Black Label Society and the lead guitarist for Ozzy Osbourne, Zakk is known most for his long, luscious hair and guitars with his signature bulls-eye design on them. Joined by fellow Ozzy band member Rob “Blasko” Nicholson on bass and then Joey Castillo (of Danzig and Queens of the Stone Age fame) on drums, there was a super group on stage at The Varsity Theater last night… no doubt about it. Sure, the band didn’t play any originals and stuck to mostly deep cuts from the almighty Black Sabbath’s discography but that didn’t lessen the amount of sheer talent on the stage.

There was something magical about watching Zakk Wylde perform in this group. I’ve seen Black Label Society multiple times now and although they are always impressive, there was something truly special about seeing him in this project. It was as if he was given more creative freedom. Every guitar solo seemed to be perfectly planned out while feeling completely organic. The way he flipped his guitar behind his head and continued to play awe-inspiring solos without missing a single note definitely had jaws on the ground. Sure, we’ve all seen it in videos before as this is a move he is notorious for but there was something absolutely magical about seeing it live.

Clearly I was eating up every moment of Zakk Sabbath’s performance. The music was on point. Sure every song was a Black Sabbath cover but there was still something added to the music and the vibe that only Zakk Wylde and his bandmates could add. Yeah, these guys are legends but it’s clear that they are still doing this for the music and the fans. I wouldn’t expect someone of Zakk’s stature to spend any time in the audience. I would expect him to just stay on stage and do his thing but Zakk surprised everyone when he wandered through the crowd and the venue. Like I explained in the beginning, it’s always humbling to see an authentic legend perform and realize that they are just normal people with a huge amount of talent and drive. Zakk did that and more and although I’ve never been a huge Black Sabbath fan, watching Zakk interact with the audience made me a huge Zakk Wylde fan.

I went to last night’s concert to see a legend and left a huge fan of an icon that treats his fans with the same respect that his fans treat him with. It was a beautiful night.